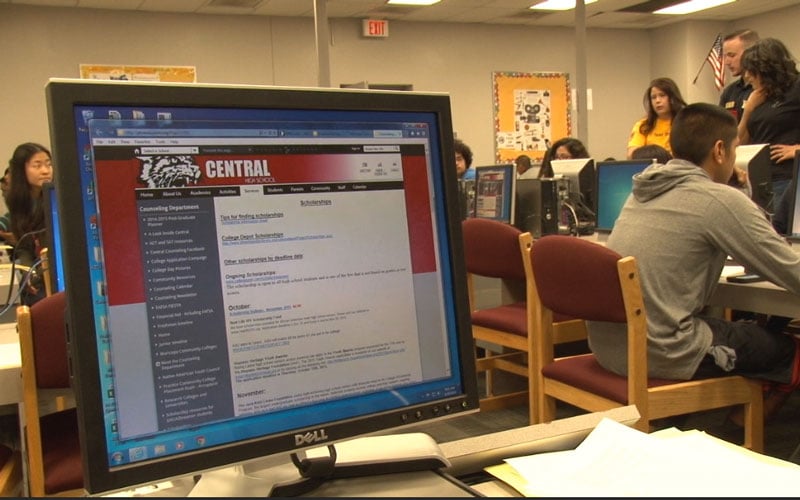 But officials at Central High School in Phoenix look at November and think College Application Month. They have spent the last few days encouraging students to apply for college. Officials set up shop in the school’s library and brought in volunteers to help student fill out college applications.

Arizona is among the worst states in getting students to college. Last year, about half of graduating high school seniors in the state went to college, according to the Arizona Commission for Postsecondary Education.

“We want every single student, by the time they leave high school, to have some type of plan,” Central High counselor Dolores Ramirez said. “I think if we aren’t trying to service all of our students, then we aren’t doing our job.”

Ramirez and the rest of the staff at Central High said they have exceeded their own expectations in the past three years.

Ramirez said that three years ago, only 20 percent of the seniors at Central High applied for college. Last year, that number rose to 98 percent, and they hope it continues to grow.

The positive attitude of students helps a lot.

“A huge majority of the students that come in here are super motivated about being here,” said Michael Wainscott, who works at Phoenix College and volunteered to help students with applications. “They’re super happy, and they’re super grateful for what we’re doing.”

Justin Smith, a senior at Central High, said he would recommend the event to the class of 2017.

“I want to keep progressing in my education and get to the career field that I want to get in,” he said.

The program offered some incentives, like a flat-screen television, but many students saw the opportunity as incentive enough.

“I would be a first generation college student,” said Myrra Buck, another senior at Central High. “None of my parents or guardians have actually gone to college yet, so it would be important for me and it would help me go into the career in which I would like to go into.”