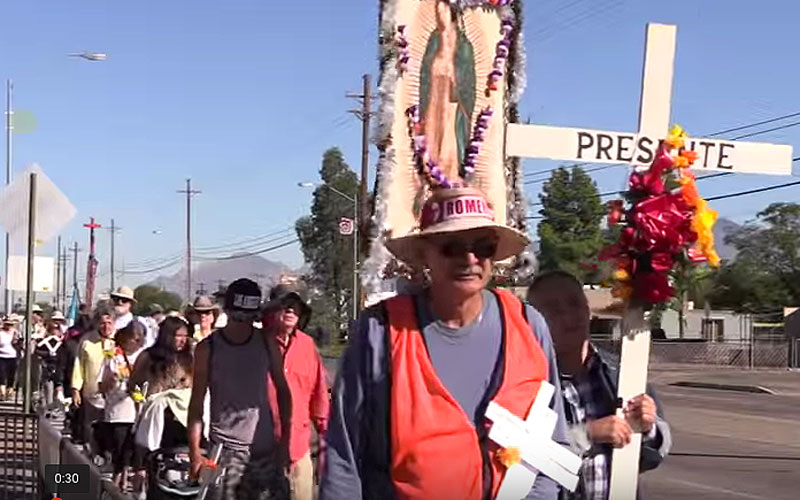 Coalición de Derechos Humanos, a human rights group in Tucson, organizes the event every year to remember the migrants who lost their lives crossing the border.

This year participants carried 137 crosses to represent each life lost on the Arizona-Mexico border. Most migrants died in the desert and many are unidentified.

“Every cross that we carry that says ‘Desconocido’ — it’s an unknown identity but they’re full human beings, with families and aspirations and dreams that we cut short because of our policies,” said Isabel Garcia, co-chair of Derechos Humanos.

The annual pilgrimage coincides with Day of the Dead, Dia de los Muertos, celebrations on both sides of the border. The holiday honors those who’ve died.

“By carrying that cross and by doing it we’re asking them to come and be with us, we’re asking them for their strength to be here because we remember them,” said Devora Gonzalez, a volunteer with Derechos Humanos’ Missing Migrant Project.

Since 2000, the Pima County Medical Examiner’s Office (PCMEO) has tried to identify 2,400 remains of suspected border crossers. The caseload is higher than any other jurisdictions in the U.S.

Thirty five percent of the remains, about 850 people, are unidentified because often the bodies don’t match missing person’s reports.

“That’s essentially the nutshell of the problem we have. It’s not necessarily determining the cause and manner of death — that’s relatively easy. It’s figuring out who they are, and trying to get those remains back to family members,” said Gregory Hess, Pima County Chief Medical Examiner.

“If it doesn’t look like we’re going to be able to identify someone in a timely manner, then we can’t keep those remains here forever, because we have storage issues,” Hess said.

The Medical Examiner’s office works with Consulates from Mexico and central American countries, as well as human rights groups including Colibri Center and Derecho Humanos to try to locate relatives.

Derechos Humanos has set up a 24-hour hotline for relatives searching for their missing loved ones.

“The families don’t know where to begin. They don’t have the resource to begin looking,” said Gonzalez, answers many of the calls. The organization hears from about 100 families every month. These days most of the calls are from Texas followed by Arizona.

The vigil ends with people adding this year’s crosses to the more than 2,000 others representing border deaths in the past 15 years.
“Death is part of our deterrence policy but that doesn’t deter anybody who’s fleeing violence or hunger or seeking to be with their families,” said Garcia.