Naelyn Pike, center, a San Carlos Apache youth who has been one of the loudest voices against a proposed copper mine at Oak Flat, poses with other speakers after a House committee meeting. (Photo by Charles McConnell/Cronkite News) 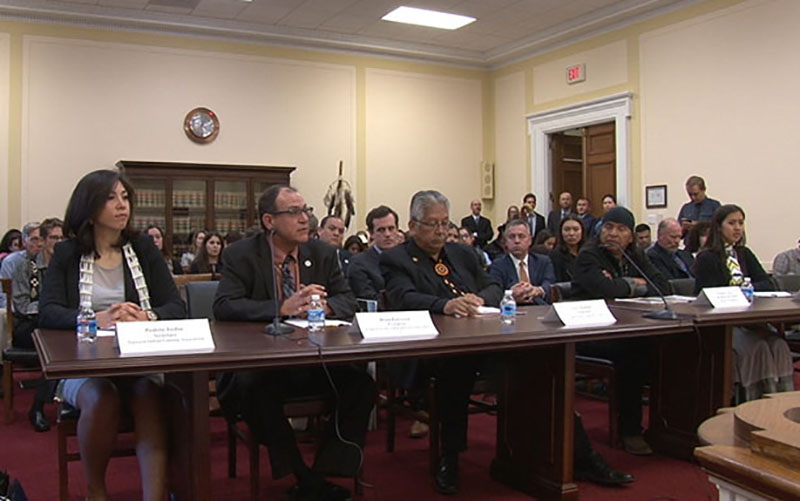 San Carlos Apache Chairman Terry Rambler, center, told members of a House committee that his people “have lived, prayed and died in the Oak Flat area since the time our Creator placed us here.” (Photo by Charles McConnell/Cronkite News) 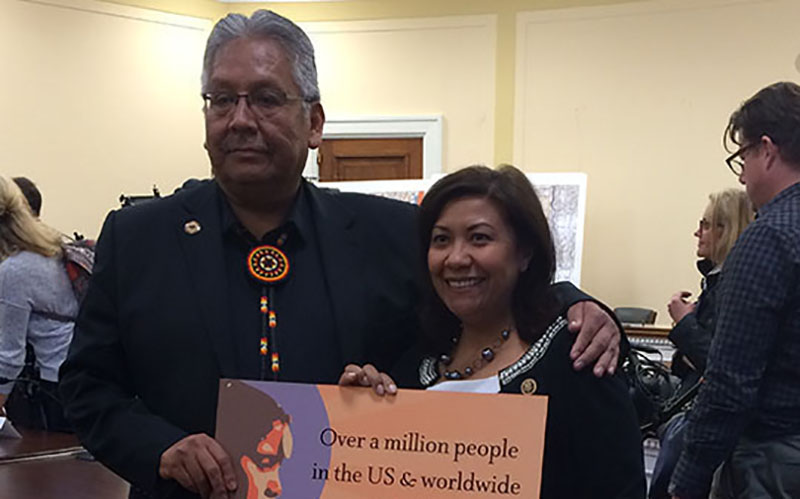 San Carlos Apache Chairman Terry Rambler with Rep. Norma Torres, D-Calif., after a forum in which Rambler and others said spiritual issues outweigh economic gains from a mine at Oak Flat. (Photo by Charles McConnell/Cronkite News)

WASHINGTON – Tribal officials renewed their calls to block a copper mine on Arizona land they consider sacred, telling lawmakers Wednesday it is not only a spiritual violation but bad precedent “for all of Indian Country.”

The meeting before members of the House Natural Resources Committee was the latest in the fight by the San Carlos Apache and others to halt the Resolution Copper mine at Oak Flat in southeastern Arizona.

Opponents of the mine came to Wednesday’s meeting armed with a petition against the mine that they said had been signed by more than 1 million people from around the globe, including nearly 200,000 Americans.

“Apache people have lived, prayed and died in the Oak Flat area since the time our Creator placed us here,” said Terry Rambler, chairman of the San Carlos Apache Tribe.

Members of other tribes who were at the meeting said protecting Oak Flat represents the larger issue of protecting Mother Nature. They compared current images of the Oak Flat area to the image of an area in Australia that they said had caved in as a result of the type of underground mining proposed by Resolution Copper.

“Just as we would expect that no woman be violated, we have the same expectation for Mother Earth, which provides sustenance to us all to live,” said Paulette Jordan, secretary of the National Indian Gaming Association.

But a spokesman for Resolution Copper said the legislation that cleared the way for the project “contains special protections for the historic Apache Leap,” and that the mine will comply with regulations in the National Environmental Policy Act.

“This world-class copper project can safely supply American manufacturers with a domestic source of copper and other critical minerals,” Andrew Taplin, project director for Resolution Copper, said in a statement Wednesday.

Taplin said the project will bring 3,700 jobs and deliver $61.4 billion “in economic value over the life of the mine,” which would likely be several decades.

The legislation that created the deal came in for heavy criticism Wednesday. The Southeast Arizona Land Exchange swaps thousands of federally owned copper-rich acres in the region for thousands more acres of what Resolution Copper calls environmentally sensitive land.

The bill failed in several Congresses until passing late last year when Sen. John McCain, R-Ariz., attached it as an amendment to last year’s “must pass” defense spending bill.

“With this midnight rider that authorized the Arizona Land Exchange, a dangerous precedent has been set for all of Indian Country,” Jordan said of what opponents called a “dead-of-night” deal.

Rep. Raul Grijalva, D-Tucson, has since introduced legislation to repeal the deal between the Interior Department and Resolution Copper, a subsidiary of multinational mining firms BHP Billiton and Rio Tinto.

“This is a fundamental spiritual issue,” said Grijalva, who drew applause when he announced that Sen. Bernie Sanders, I-Vt., and Sen. Martin Heinrich, D-N.M., plan to introduce a companion bill in the Senate.

Speakers at Wednesday’s meeting downplayed the economic arguments for the mine.

“Living on our land with our families is more important to us Native people than any career or job opportunity,” Rambler said. “We need to stay as close as possible to our ancestral lands. Since we are not going anywhere, we are bound to protect these places – places like Oak Flat.”

Naelyn Pike, a San Carlos Apache youth who has grown up in the Oak Flat area, equated the destruction of Oak Flat to the continued genocide of Natives. She said it is up to Congress to protect the heritage of Native Americans and their sacred lands.

Rambler said the world can learn from his tribe’s protection of its land in the face of a global climate change crisis.

“Our ties to the land, our protection of the land – that should resonate with America,” he said.

Jordan echoed those sentiments, citing what she called a Native proverb.

“Only when the last tree has died, the last river has been poisoned, the last fish been caught, will we realize that we cannot eat money,” she said.