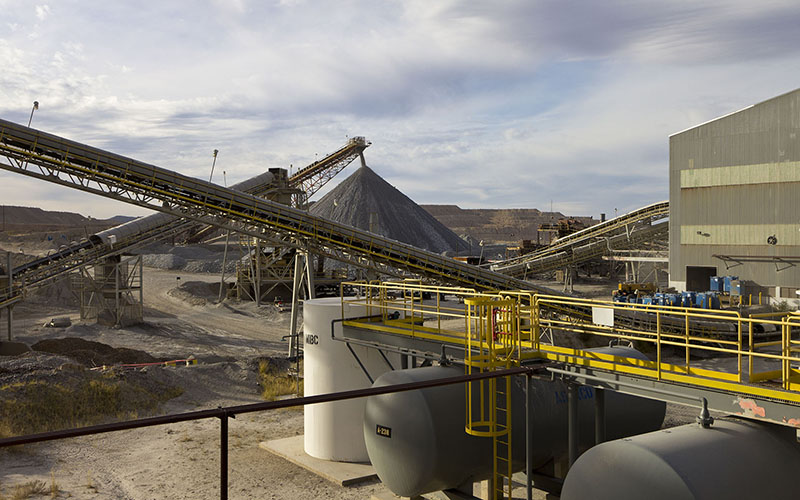 Part of the Asarco mining and smelting complex near Hayden. The company will fund as much as $150 million in pollution-control upgrades as part of a settlement with the government. (Photo by Jeffrey M. Rzeszotarski via flickr/Creative Commons)

WASHINGTON – ASARCO will fund up to $150 million in pollution improvements at its Hayden smelter and pay millions more toward local environmental projects to settle federal government charges that the plant violated Clean Air Act standards.

The proposed upgrades, announced Tuesday by the Justice Department and the Environmental Protection Agency, would cut about 8.5 tons of hazardous pollutants like lead and arsenic from the plant’s emissions every year, the government said. It would also reduce other pollutants by thousands of tons a year.

A statement from ASARCO said it was “thrilled” to reach a settlement with federal officials that will let the mining and processing company move forward with clean-air modifications that it said will make the Hayden plant among the cleanest in the world.

“ASARCO is committed to ensuring that the environment in Hayden is clean and safe, and we are thrilled that we’ve reached an agreement with EPA to move forward with the modifications to the smelter,” said Jack Garrity, technical services manager at the Hayden Smelter, in the company statement.

The proposed consent decree would settle a claim by the EPA that the Hayden smelter was a “major source” of hazardous air pollutants, which pose a health risk to people living near the facility.

“The communities living near this century-old smelter will breathe cleaner air as a result of this landmark enforcement action,” EPA Southwest Regional Administrator Jared Blumenfeld said in a prepared statement announcing the deal.

EPA puts the cost of the improvements at $150 million, while ASARCO estimates that upgrades will cost in excess of $128 million. The company said the project should be completed in three years.

The EPA said the Hayden facility produces 300 million pounds of copper anodes a year, and the company said the plant provided $57.1 million in wages and benefits to the region last year.

An ASARCO facility has been operating for 103 years near Hayden, and residents of the region have a long history of grappling with environmental issues from the smelter.

“I can remember hiking, years ago, south of Superior in the Wood Canyon area which is around 20 miles from Hayden,” said Don Steuter, conservation chair for the Grand Canyon Chapter of the Sierra Club. “The weather was beautiful, but the air would be hazy, you had very poor visibility, mainly from the sulfur dioxide emissions from the Hayden’s smelter.”

Steuter said other problems near the plant have included contamination of soil and groundwater in the area.

“Seven years ago, city officials removed a lot of soil from people’s yards that lived in Hayden because there was so much lead, arsenic and copper in the soil,” he said.

Steuter welcomed the consent agreement as “another step” in efforts to clean up the plant.

Besides the pollution reduction upgrades, the 130-page settlement calls on the company to spend $6 million on a Pinal County road paving project, put $2 million aside for abatement of lead-based paint in area homes and schools and spend $1 million to replace a diesel train at the complex with a cleaner diesel-electric train.

The settlement also calls on ASARCO to pay $4.5 million in civil penalties, although the consent decree states that the agreement is not “an admission of liability” in the complaint originally filed by the government. The company continues to deny that it was a “major source” of pollutants, according to the settlement.

The settlement was four years in the making, as “proposals and counter-proposals had to be carefully evaluated for legality and technical feasibility, and both parties had to get management concurrence throughout the process,” a company spokesman said.

Rep. Ann Kirkpatrick, D-Flagstaff, praised the final arrival of an agreement between the parties.

“The communities of Hayden and Winkelman are the real winners today because this agreement will protect local jobs and public health,” she said in a prepared statement.

Blumenfeld said that in order for ASARCO to meet the terms set by EPA, it will have to replace and redesign all pollution-control equipment at the Hayden plant.

Steuter said he was not sure about ASARCO’s claim that the project would make the Hayden Smelter the cleanest in the world, but he hopes those improvements include the latest technology to help reduce toxins.

He said that no matter what side of the fence people are on, “I think everybody realizes … that we need to continue to make progress towards cleaning up sites like these.”