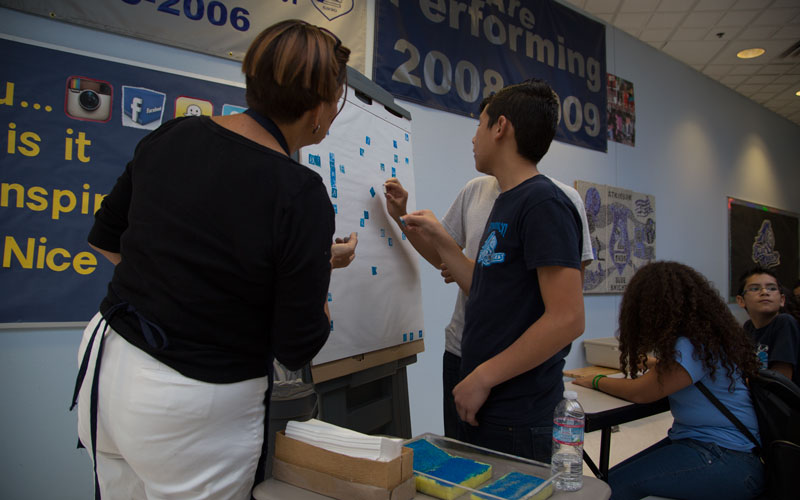 “We have art in every single school,” said Kate Cross, Atkinson Middle School seventh and eighth grade art teacher. “Every single child in our district has the opportunity to take art from kindergarten through eighth grade.”

Cross said despite being hit hard financially, students, parents, community members, teachers and even school administrators have made it their mission to push arts education.

“Really it was our community and parents of our community during public board meetings who voiced their concerns about how important arts education is to our students,” said Katie Francis, communications coordinator for Cartwright District. “They are the champions of why our arts education here at Cartwright is so strong, along with our faculty members such as Mrs. Cross, who has over 30 years here as our art teacher.”

Veronica Sanchez, Director of Communications and Community Engagement at the Cartwright District said that arts education is fundamental, and the only way to see a child’s full potential is to expose them to every subject.

The 2007 Great Recession hit Arizona’s K-12 education budget hard. And that cut arts education. Many school districts attempted to fill the gap by asking their communities to pass budget overrides and bonds to save programs such as arts education, physical education and even some language programs.

“You gotta be patient with it,” said Jasmin Arellano, eighth grade art student at Atkinson Middle School, “people are always like, ‘I wish I could draw,’ or that ‘you’re so talented.’ It’s not something you are born with, it’s something you have to practice with and you get better over time.”

She said the arts require dedication, practice and time working in many small ways, as she does with doodling. Arellano said her favorite type of art is sketching and drawing.

A recent study published by the Institute of Education Sciences National Center for Education Statistics found that arts education has been cut across the country, with dance and drama taking the deepest cut. The study stated that many arts programs had been combined with other core subjects.

Dysart School District, which lost a budget override election and a bond election, was forced to combine arts education with other programs.

“It allows students to really get creative,” said Katye Gainey, dance teacher at Dysart High School and District Fine Arts Director, “they have that opportunity to figure out a different way to express themselves,” which benefits growth in multiple subject areas.

On Friday, Gov. Doug Ducey signed a $3.5 billion K-12 education funding bill for the next 10 years. The plan must still be approved by voters during a special election scheduled for May.

“Personally I am a big believer in classical education, but I am not going to tie any conditions,” said House Rep. Paul Boyer, R-Phoenix and an education committee member. He said schools should use funds however they deem fit. “If they think that STEM or STEAM is more important then they should have the opportunity to fund that.”

Former educators have attended school board meetings to voice concern over the cuts in arts education.

“Some things parents might consider doing is checking into different arts organizations that are local,” said Diane Sullivan, violinist and former music educator, “There is also a wonderful summer music camp in Northern Arizona [NAU].”

Sullivan said it is crucial for parents to get involved with their children’s educational careers and start exposing them to the arts now. Arizona offers many opportunities to do so, she said, such as the Phoenix Art Museum, Chandler Symphony, City of Glendale Summer Band, North Valley Coral, Valley Youth Theatre, Phoenix Theatre, local Art Galleries such as Roosevelt Row and art shows at the State Fair.