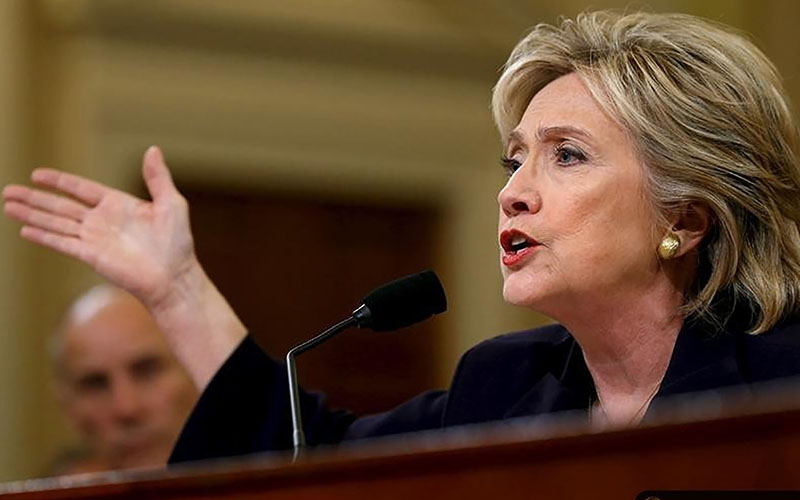 Democratic presidential candidate Hillary Clinton, shown during a recent House hearing, has drawn fire from Republicans for suggesting during a broadcast interview that problems with health care at the Department of Veterans Affairs are not as bad as they have been made to appear. (Photo by Jonathan Ernst/Reuters)

WASHINGTON – Sen. John McCain demanded Wednesday that presidential candidate Hillary Clinton apologize to veterans for saying that Department of Veterans Affairs problems are “not as widespread” as they appear but have been inflated by Republicans’ “ideological agenda.”

“Give me a break,” said McCain, R-Ariz., during a conference call Wednesday with House Veterans Affairs Committee Chairman Jeff Miller, R-Fla. “The VA inspector general said there are 800,000 records stalled in the system. If that’s not ‘widespread,’ then I’d like to know what is.”

McCain and Miller became the most recent Republicans to condemn remarks Clinton made Friday during an interview on “The Rachel Maddow Show.” Clinton, the current frontrunner in the Democratic presidential race, said the VA scandal that erupted in Phoenix last year was real, but “not as widespread as it has been made out to be.”

“Nobody would believe that from the coverage you see, and the constant berating of the VA that comes from the Republicans, in part in pursuit of this ideological agenda that they have,” Clinton told Maddow.

She went on to say that there is “something not working within the bureaucracy” of the VA and to suggest some fixes. But McCain condemned the remarks as “offensive to not only all veterans, but all Americans.” He urged the former secretary of state to apologize to all veterans, “including the 50 who died awaiting care at the Phoenix VA hospital.”

Clinton’s campaign did not immediately respond to a request for comment Wednesday. But earlier this week, campaign spokesman Brian Fallon told CNN Tuesday that Clinton will roll out a plan next month to reform the VA and its “systemic” management problems.

Not all veterans groups were impressed.

“If the plight of veterans was a priority for Mrs. Clinton, she would already have a plan to reform the VA, not be promising one a month from now – and only after a serious campaign gaffe,” said Concerned Veterans for America CEO Pete Hegseth on Tuesday.

McCain’s latest comments followed a Monday statement in which he said Clinton “owes an apology to the families of the veterans who lost their loved ones due to mismanagement and corruption in the federal government.”

A VA general inspector report released last year revealed that veterans at a Phoenix VA hospital waited an average of 115 days for initial doctors appointments and that at least 40 veterans died waiting for treatment there.

McCain on Wednesday said Clinton had “injected partisanship into this bipartisan issue.”

“(If she) really believes the comments she made, I don’t see how any veteran who cares about their fellow veterans could support her quest to be commander in chief,” he said during Wednesday’s call.

Rep. Ann Kirkpatrick, D-Flagstaff, said Wednesday that the problems with the VA are real and should not be a partisan football.

“The VA scandal has nothing to do with partisan politics and everything to do with systemic failure, negligence and lack of accountability,” Kirkpatrick said in a statement released by her office.

“The problems we’ve seen at the Phoenix VA are devastating and real,” her statement said. “I’ve heard too many of these terrible stories from too many of our veterans.”