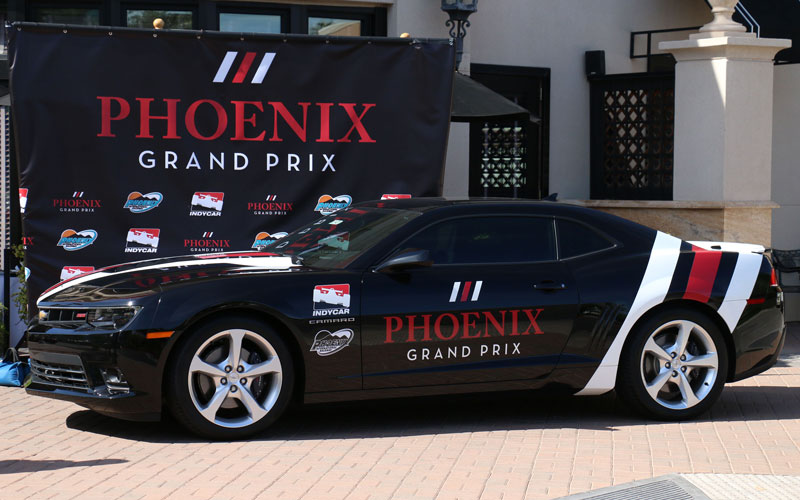 Chevrolet Camaro outside The Capital Grille at the Biltmore for the 2016 Phoenix Grand Prix announcement on Tuesday, Oct. 27, 2015. (Photo by Maria Vasquez/Cronkite News)

An IndyCar race car sits outside The Capitol Grille at the Biltmore during the 2016 Phoenix Grand Prix announcement on Oct. 27, 2015. (Photo by Maria Vasquez/Cronkite News) 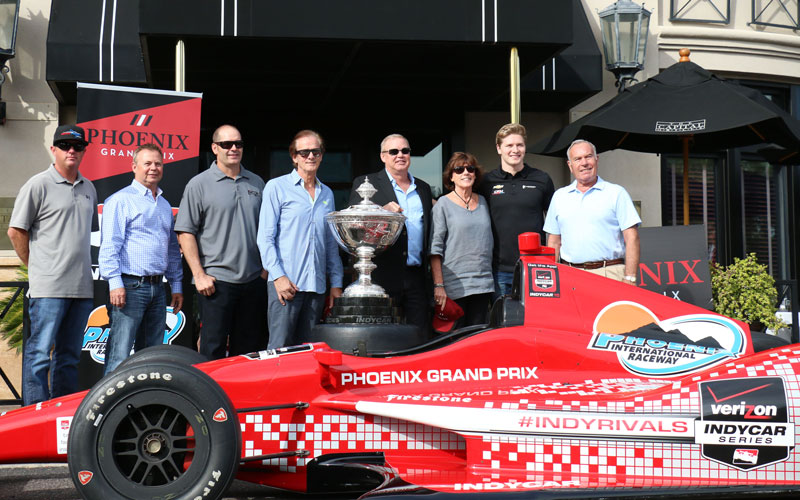 IndyCar drivers past and present joined in the announcement Tuesday of IndyCar’s return to Phoenix International Raceway. (Photo by Maria Vasquez/Cronkite News)

“We’re tremendously excited about this,” Sperber said. “It’s been something a lot of race fans, not just here in the Valley but across the country, have been looking forward to for a long time.”

The Phoenix Grand Prix will be the second race on the Verizon IndyCar Series 2016 schedule. The track will give racers a good opportunity to prepare for the Indianapolis 500. PIR is the only oval before the big race at the storied oval at Indianapolis Motor Speedway.

“Next year will be the 100th running of the Indianapolis 500, so to come back onto the schedule during this historic season, just means the world to all of us at PIR,” Sperber said.

PIR is one of seven venues on the 2016 schedule that has hosted 25 or more IndyCar races. In fact, it is second to only Indianapolis Motor Speedway.

From its opening in 1964 to the last IndyCar run in 2005, PIR hosted 61 IndyCar races. Many legendary names such as Mario Andretti, Tom Sneva, Arie Luyendyk and Roger Penske all raced at PIR and came away with victories.

“Phoenix loves IndyCars. Phoenix was built for the IndyCar,” said Al Unser Jr., two-time Indianapolis 500 winner. “When we lost the Phoenix race that hurt a lot of people in IndyCar racing. I think it’s fantastic that the IndyCars are back here where they belong in Phoenix, Arizona.”

Younger drivers like 24-year-old Josef Newgarden, who won two races last season, have never raced in Phoenix, and are anxious to get out on the track.

“I’ve always loved the shorter ovals,” Newgarden said. “Everyone’s always told me about Phoenix. They said, ‘Hey, if you like those types of tracks, wait until you maybe get an opportunity to go to Phoenix.’ I hear it’s just incredibly quick, and now it’s going to be even quicker.”