Bridals by Ofelia in Phoenix offers a variety of quinceañera and bridal dresses. (Photo by Brooke Stobbe/Cronkite News) 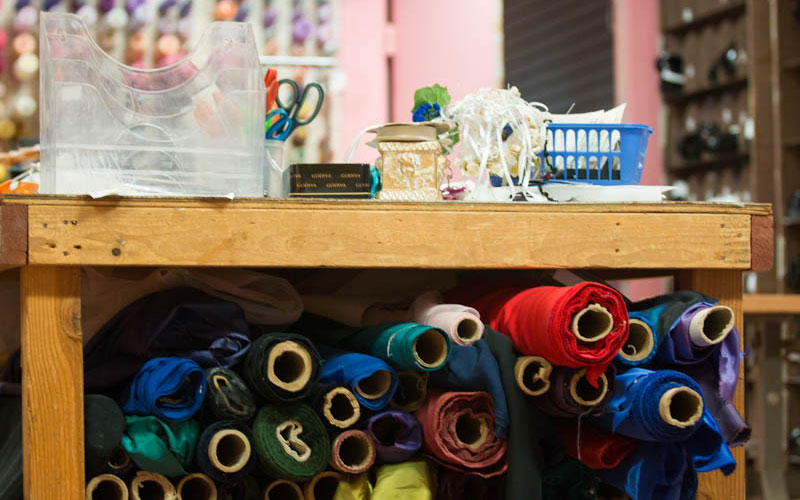 Until about four years ago, Ofelia Martinez (not pictured), designed all her own dresses. Now she sells products mostly made in China. (Photo by Brooke Stobbe/Cronkite News) 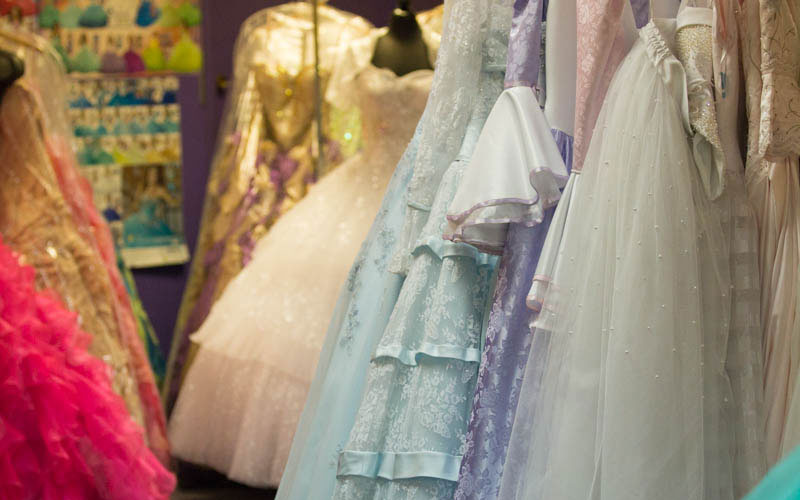 While Bridals by Ofelia mostly offeres women’s wear, there are select items for men, such as dress coats. (Photo by Brooke Stobbe/Cronkite News) 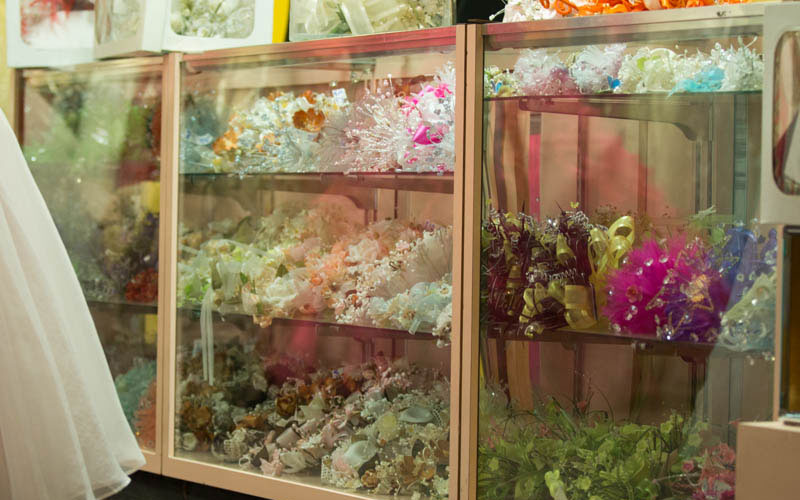 “I remember the person who picked me up that night was like, ‘Where’s your luggage?’ And I said, ‘I don’t have luggage!'” Hassan said with a laugh. “I didn’t even have a backpack.”

Hassan eventually married and had three children. He worked at the airport for his first American job, but he dreamed of opening his own restaurant.

In 2012, the dream became a reality. Authentic Ethioafrican Spices, near 18th Street and McDowell Road, opened its doors.

Hassan chose the restaurant’s location carefully. The Loop 202, Interstate 10 and State Route 51 are nearby, and several other refugee and immigrant business owners have set up shop along McDowell Road.

“Most Somali or East African businesses are located on this street,” said Hassan, referencing the Bati Bazaar grocery store and Juba restaurant just blocks away. “Immigrants around this area is our target market.”

“It reminds me of New York City’s old East Village in a way,” said Marshall Shore, nicknamed Phoenix’s “hipstorian.” “It has a little bit of everything and an amazing dose of diversity – not just in skin tone, but in age and socioeconomic status, too.”

Since 1980, more than 62,000 people from 109 countries have moved to the state through the Arizona Refugee Resettlement Program, according to Arizona Department of Health Services data as of 2013. Maricopa County resettled the vast majority of those refugees, with many calling Phoenix home.

In many ways, it’s a region like the name of Phoenix itself suggests: Rising from the ashes and creating something new.

“When I first came here (in Arizona) there was only one lane down McDowell. … And it was how you would get over to downtown,” said Kimbly Deane, owner of Gourmet House of Hong Kong, a Chinese restaurant that has been in the area for more than 30 years.

The block was once described as one of the most glamorous streets Phoenix had to offer. In the 1950s, Phoenicians dubbed the street “Miracle Mile” because of the row of businesses from Central Avenue to 20th Street. Pedestrians walked down the narrow road, hopping from one store to the next.

Shore said businesses included a birdhouse vendor, McConnell’s Photography and the Miracle Mile Deli – although at the time, it was under another name.

“It would have been the bustling district,” Shore said. “It was the edge of town, and it’s where everyone did their shopping.”

Gov. George W.P. Hunt – the first governor of Arizona – once lived on the street, but his home was demolished in the late 1950s, Shore said.

The street’s vibrancy began to slip during the end of that decade.

City officials tried to revitalize the area. Newspaper articles from 1989 indicated Phoenix attempted to widen the street, but the construction devastated the little business hub. Business owners told the Arizona Business Gazette that construction led to the loss of 21 jobs.

In 1991, the city commissioned a public art piece – the white arch with a picket fence on top. The $47,500 project by artist Michelle Stuhl portrays the historic symbol to the entrance of downtown Phoenix.

“It didn’t seem to reinvigorate the area like they would have hoped,” Shore said. “But it showed that the city still found the area special and cared.”

The situation became even worse during the Great Recession.

One of these stores was La Mansion, a furniture store that catered to the Hispanic population. It was owned and operated by Colombian immigrants who came into the Phoenix area in the early 1990s.

“We were the leading Hispanic retailer at the time,” said Andres Fajardo, the owner of La Mansion. “We had five branches in the Arizona area. But not only were things happening with the economy, there were immigration policies that hurt our business, too.”

The McDowell Road store closed in the spring of 2008.

“Sometimes I look at (the development happening) downtown, and wonder, ‘When will this hit by me?'” Deane said.

Visitors can catch glimmers of the stretch’s heyday: original storefronts and some old signs, Shore said.

But local business owners said the area might be on the cusp of a renaissance as more entrepreneurs open shop along the strip. But unlike areas undergoing more traditional gentrification – with the chain stores that come along with it – the strip has attracted a diverse array of businesses that give it a unique international flavor.

“You are absolutely seeing people have this renewed value in that neighborhood experience,” Shore said.

For decades, Mexican-centric shops and restaurants, like mariscos (seafood restaurants) and mueblerias (furniture stores) have been a staple to the area.

But shops representing other cultures began appearing as well.

“Definitely the last 15 or 20 years, all of these immigrants came here,” Hassan said. “And through hard work, we created a community that’s growing tremendously. You can see a lot of people’s lives change because they came here for a chance to rebuild their life to live the American dream.”

Hassan’s shop boasts dishes such as sambusa and injera bread from his homeland. Hassan treats his new business as a labor of love, cooking side by side with his wife, Elsa, and making all the deliveries himself.

“I do my business not only for profit, but expressing that great culture … it’s a way to serve a community that has helped me get a better life,” Hassan said.

Deane moved to the United States from Laos when she was 22. She worked in manufacturing for more than 20 years, and she became interested in the food industry and co-owned a buffet in Mesa. Deane sold the business to buy her own restaurant, Gourmet House of Hong Kong.

“I worked really hard,” Deane said. “During slow hours, I would paint the walls, put in the ceiling tiles and clean.”

She has since run her restaurant as a local lunch hot spot.

The Fajardo family worked to keep its business alive. Six months after shutting its doors, La Mansion became “The Mansion.”

“We pride ourselves in offering a line of credit for smaller-ticket items,” Fajardo said. “We built a trust and loyalty among our customers in the community. And we still help them achieve the American dream.”

In the past two years, three new businesses – Ollie Vaughs, Smooth Brew and Nifty Thrifty – have made McDowell home.

Smooth Brew, a coffee and pastry shop, opened its doors this May. On a recent Saturday morning, the cafe buzzed with energy. Coffeemakers hummed, workers chatted with their regulars and classic music played while customers worked on their laptops.

Taking over the abandoned building that once housed a dog rescue, co-owner Kat Proffit said the spot is designed to add to the neighborhood’s diverse flavor.

In many ways, the menu reflects the diverse demographic of its customers. They offer a Horchata latte and a pinot burrito – a Filipino inspired dish.

The neighborhood reminds Profitt of her childhood, she said. She was born in the Philippines and raised in Guam.

“Guam is like a melting pot and so diverse in its cultural makeup that I feel like this neighborhood is the same way,” she said. “When you can walk down the street to get coffee, walk to get some Koskos and Ethiopian food, that just adds to your life. … It opens your perspective.”

And Smooth Brew is doing well financially, Profitt said. Since its first and second day of opening, she said the business has seen a 250 percent increase in revenue.

Shore said the diversity will restore the area to its former glory.

“(McDowell) keeps re-inventing itself. Now you have this rise of immigrants, this melting pot of a community, where it isn’t just of one thing,” he said.

Hassan said McDowell’s positive trajectory was the ultimate factor that led him to settle his business there.

“I could easily see a boom in the next five to 10 years. Business is a long-term benefit that you have to be invested within the area,” Hassan said.

“I love the fact that (Smooth Brew) brings in a completely different type of people in the area,” Fajardo said. “Hopefully, they will also drive by and see my business.”

As for the kinship between the local immigrant owners, Hassan said there has to be a special relationship. He recalled a South African tale of a visit from an anthropologist.

“(The anthropologist) had a basket full of fruit and gathered all the kids from the village. He told them that whoever runs here first will get the basket of fruit,” Hassan said. “But when he said go, no one was running. They walked together and shared that fruit.”

“We are all helping each other here (on McDowell),” he said. “We are immigrants of different backgrounds getting a hand to be a better person.”