The minnowlike Gila Chub, found in Arizona and New Mexico, is threatened by loss of habitat and has been listed as an endangered species since 2005. (Photo by Brian Gratwicke via flickr/Creative Commons) 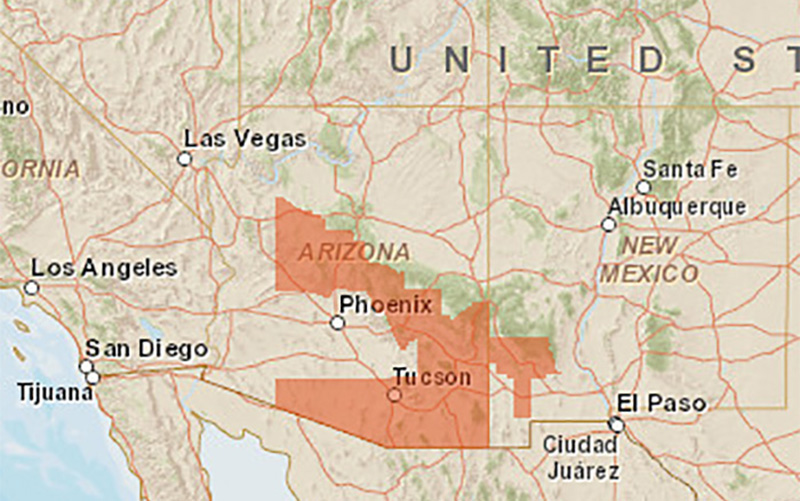 Range of the endangered Gila chub, which has seen degradation to as mnuch as 90 percent of its historic habitat in Arizona and New Mexico, officials say. (Map courtesy the U.S. Fish and Wildlife Service)

WASHINGTON – The U.S. Fish and Wildlife Service proposed a recovery plan Tuesday for the endangered Gila chub that seeks to reduce threats from nonnative species and protect the fish’s degraded habitat in Arizona and New Mexico.

The “small-finned minnow with a deep and chubby body” is still found in its native range, which stretches into northern Mexico, but nonnative fish and decades of human intervention have led to the degradation of its natural habitat, environmentalists said.

“The draft recovery plan addresses in a realistic way the chubs’ plight of living in populations that are isolated from each other, with nonnative fish that can eat chubs in the streams that are in between,” said Michael Robinson of the Center for Biological Diversity.

The government estimates that 90 percent of the species’ habitat has been degraded, which Robinson said is partly due to groundwater depletion. He said the species has also been “affected in particular by livestock grazing, which in many places has changed the hydrology of the streams.”

“Groundwater depletion reduces flows in the springs that are relied on by the Gila chubs,” Robinson said. “The Gila chub really needs conservation management at this point.”

The plan unveiled Tuesday by the Fish and Wildlife Service is “a recipe for recovery” that “paints a roadmap of what would be necessary” to get the chub off the endangered species list, said Jeff Humphrey, a spokesman for the service’s Southwest division. The fish was first listed as endangered in 2005.

Gila chub are found naturally in pools and small streams. The fish – females can reach 10 inches while males are rarely more than 6 inches – survive on aquatic or terrestrial insects and filamentous algae, according to the wildlife service. They are illegal to possess without a permit.

The recovery strategy calls for “ensuring that existing habitat integrity and genetic diversity of the species are adequately protected, represented, and replicated.”

That could mean protecting current populations, establishing new ones, monitoring them under scientifically based standard protocol and working alongside agencies, tribes and the government of Mexico, the proposal said.

Humphrey said the plan is expected to cost nearly $7 million for what will ultimately be “a decades-long proposition.” The service estimates it will take 50 years to repatriate Gila chub to protected streams and remove the fish from the endangered species list.

A spokesman for the Arizona Game and Fish Department said the agency had not reviewed the recovery plan and could not comment.

The Fish and Wildlife Service will accept public comments on the proposal until Dec. 28.