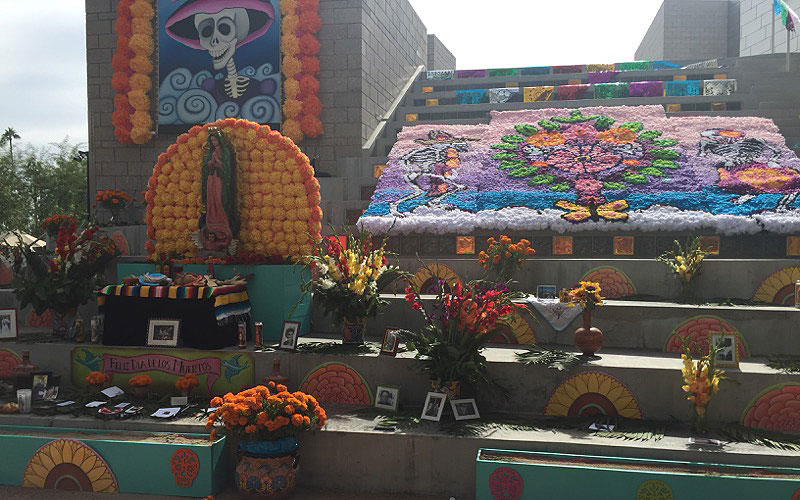 A huge community altar honoring the dead was the center of a Dia de Los Muertos celebration at the Mesa Arts Center. (Photo by Jennifer Soules/Cronkite News)

“I believe the Spanish, the Mexican influence has really pretty much taken off.,” said Eliseo Quiroz, an instructor at Ballet Folklorico Amistad.

The traditional dancers with colorful dresses and painted faces entertained a large crowd.

A huge community altar honoring the dead was the centerpiece of the celebration. Like smaller ones in Mexico it included photographs, mementos, and traditional marigold flowers. Families in Mexico leave a path of petals to guide spirits back home this time of year.

“I think the imagery is very popular among artists and art galleries,” said Artist Kyllan Maney.

Maney led the altar project. It took nearly 40 volunteers and ten hours to set up.

Caracas and calaveras, or skeletons and skulls, are a big part of Dia de los Muertos. They’re often dressed in festive clothes.

The early November holiday is commonly associated with Mexico but has roots throughout Latin America and now has a growing following in the U.S.

“People start to question what it actually means and they realize there is a deeper meaning and it’s not just some Halloween event,” Maney said.

It coincides with Halloween but is about more than candy and costumes.

“I hope that people walk away with a deeper understanding of Dia de los Muertos, also an understanding and respect for those who have passed on,” said Maney.