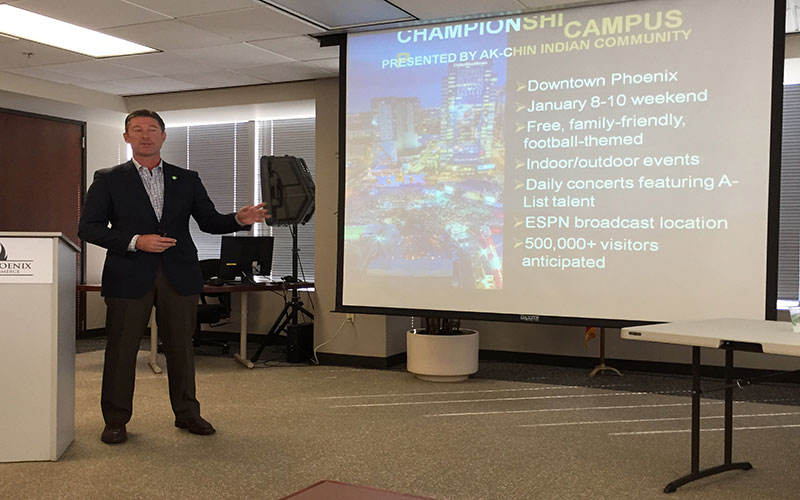 On the heels of hosting a Super Bowl that one study said brought the Valley $720 million in economic impact, Glendale also will host the 2016 College Football Playoff National Championship Game in January.

“If past BCS games and Super Bowls are an example – and I think they are – we’ll see our hotel rooms full, we’ll see our restaurants busy, we’ll see our golf courses and other amenities being taken advantage of,” committee co-chairman Brad Wright said at a Greater Phoenix Chamber of Commerce’s Economic Development Committee meeting on Thursday. “There’s the direct and the indirect activity that these events generate that’s really helpful.”

Several events held during the playoff weekend will add to that economic impact. One of them is Championship Campus, a three-day series of activities held across five blocks in downtown Phoenix that will feature concerts and a fan experience.

Phoenix will continue to bask in the national sports limelight in 2017 when it hosts the NCAA Final Four.

Dawn Rogers, executive director and CEO of the 2017 Phoenix NCAA Basketball Final Four, said she expects more than 100,000 visitors for the 2017 Final Four.

Rogers noted that the games will feature a music festival and fan fest similar to those at the Super Bowl. She said Arizona’s time zone also could work in its favor to spur economic impact.

“Because of our time zone, the games will actually be over earlier, and so fans will spill back out and go out and eat and go to bars,” she said. “The night life I think on Saturday will be larger than normal in other cities, so that just means that people are out spending more of their disposable income here in the Valley.”

“A lasting impact goes back to when someone comes to the state of Arizona, a corporation that is interested in what we have to offer as a state, and they decide to either relocate or expand here,” said Creedon, who also serves as the assistant vice president of community and municipal relations for Arizona State University.

It’s not just sporting events that aid the economy.

Jerry Harper, deputy director of sales and marketing for the Phoenix Convention Center & Venues, said that between 2009 and 2014, the convention center had a $314 million average annual economic impact and that last year, the center held more than 500 events.

But he also said his host committee depends on sponsors to help shoulder the costs of hosting the college football playoff game, and the committee hopes to raise more than $14 million.

“We are physically situated to host these events,” Wright said. “We’ve invested in the things we need to host them. And as long as we have the community support, I think it’s an opportunity to be successful in attracting them.”

An earlier version of this article contained inaccurate information about the title of the game, which game Arlington hosted and Dawn Rogers’ title. The game is the College Football Playoff National Championship Game. Arlington hosted the 2015 game. Rogers is the executive director and CEO of the 2017 Phoenix NCAA Basketball Final Four.