The north side of the Grand Canal in Phoenix is awaiting a $4.9 million beautification project designed to improve pedestrian pathways and tie the canal system into neighborhoods. (Photo by Eboni Johnson/Cronkite News) 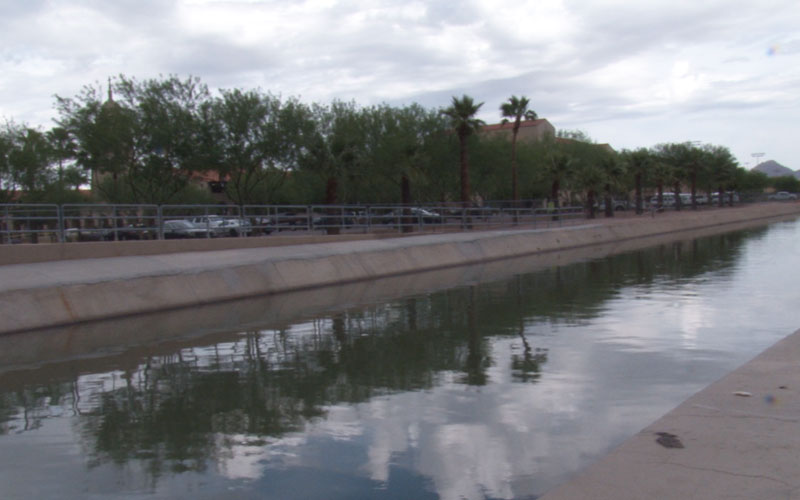 Phoenix is spending more than $4 million to upgrade the pedestrian experience along the Grand Canal. The city plans to improve trails, build bridges and install art by 2017. (Photo by Eboni Johnson/Cronkite News)

The Grand Canalscape project is designed to reinvent Phoenix by integrating the canals into neighborhoods and adding lighted pathways along the north bank.

“There are more miles of canal in greater Phoenix than in Venice and Amsterdam combined,” said Diane Brossart, CEO of Arizona Forward. “So there is a real opportunity to make those into destination points, points of pride for the community.”

Phase one of the project is expected to run along the Grand Canal from 15th Avenue to 16th Street and from Garfield to Van Buren. The City of Phoenix, Arizona Forward and SRP (Salt River Projects) are working together on the $4.9 million project.

Kerry Wilcoxon with the City of Phoenix said the city is looking for as much input from residents as possible.

“For this project to work we have to recognize that it’s really not my project, and it’s not the developers’ or contractors’ project, it’s not really even the city’s project, it’s the residents’ project,” Wilcoxon said.

SRP currently maintains and operates 132 miles of canal. Jim Duncan of SRP said it is important for residents to understand the canals and the Bureau of Reclamation, which owns the canals.

The $4.9 million budget includes $700,000 from the City of Phoenix public art funds, and $4.2 million from the SRP municipal aesthetics program. According to the city, all SRP aesthetic funds are on a two-year time cap and must be spent by September 2016.

Valley resident Will Novak said the project is a great first step and he is excited for the renovations to begin — but hopes they will extend to more than just the Grand Canal.

“My dream is that one day these canals will be linear parks that stretch all through our metropolitan area,” Novak said. “They could really be something special that people would know our city for.”

The project designs and community outreach started in 2015 and goes until 2016. The start of construction is on track to begin summer 2016 and the completion date is set for fall 2016.

“Phase two, depending on the funding source, we have a couple of options out there.” Wilcoxon said. “Phase two would build off of phase one and would extend the trail from about Indian School Road down to McDowell and that’s using aesthetics funds like we did in phase one.”

However, Phoenix has applied for federal funding, which would result in a much larger budget. Phase two of the project could then extend from the I-17 all the way down to Tempe. This project would be built in the next three to four years.

Information on upcoming public input meetings will be posted on grandcanalscape.com.