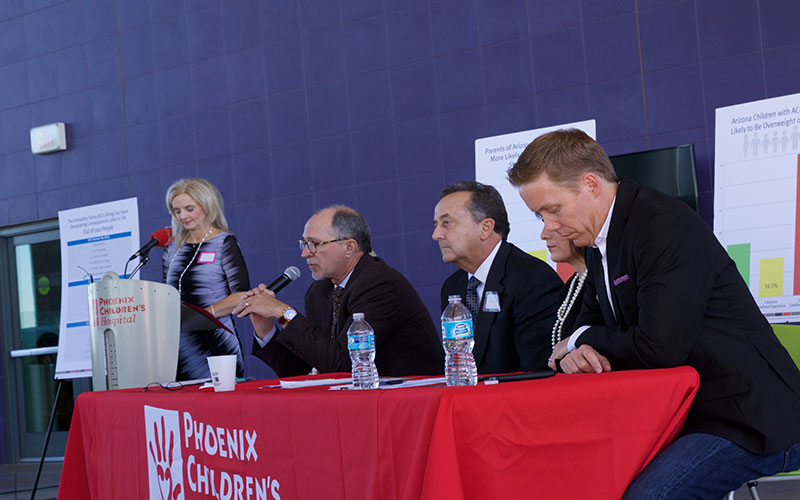 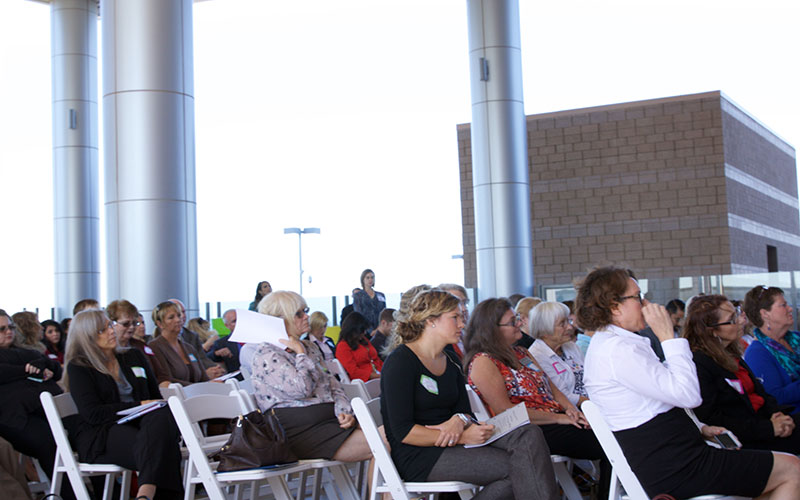 Childhood advocates from across the state gather Thursday, Oct. 22, 2015, on the roof of Phoenix Children’s Hospital to watch a panel of businesspeople discuss ways to combat childhood trauma.
(Photo by James Anderson/Cronkite News)

The panel acknowledged that adverse childhood experiences (ACE’s), which include abuse, neglect and family incarceration, impact not just Arizona youth but the state as a whole – to the tune of an estimated $23 billion annually. The amount, compiled by the Perryman Group and commissioned by the Dion Initiative for Child Well-Being and Bullying Prevention, includes costs for medical care, welfare and lost income.

“We’re talking about economics, but this is really what we’re talking about: kids that are out there and parents who want to do a good job but don’t have the resources to do it,” said Marcia Stanton, a senior injury prevention specialist at Phoenix Children’s Hospital.

The coalition discussed the same statistics in a conference last year but met this time to tackle the economic side.

The five-member panel representing companies in the educational, technological, marketing and entrepreneurial sectors agreed that those statistics can cause companies to avoid Arizona as a place of investment.

“They just needed an outlet,” Clarke said. “They needed an opportunity to display their creativity.”

Other panelists pointed to state funding and the lack thereof in their opinion. Arizona School Boards Association Executive Director Tim Ogle said K-12 education is the largest employer in the state, and he said its employees often could do better financially in another state.

“Professional employees are driving across the border into California, severing ties with our state and receiving financial packages that are up to 20 percent higher instantly,” Ogle said.

Nicole Stanton, who moderated the event and founded Stop Bullying AZ said it was important to “leverage the resources we have.”

“At some point, we just need more resources,” she said. She and other members of the coalition advocated for more evidence-based programs that help parents.

“How do we get children to stop experiencing these adverse experiences at home? Well, we change their home life, and we do that through education,” said Brad Snyder, who directs the Dion Initiative for Child Well-Being and Bullying Prevention.

Snyder leads the Arizona Youth Survey, which examines the experiences 8th, 10th and 12th grade students. He said some of the numbers that pertain to childhood trauma are actually going in the right direction.

“Substance abuse, violence is all trending in the right direction,” he said. “That doesn’t mean that we’re done. We have a lot more work to do.”