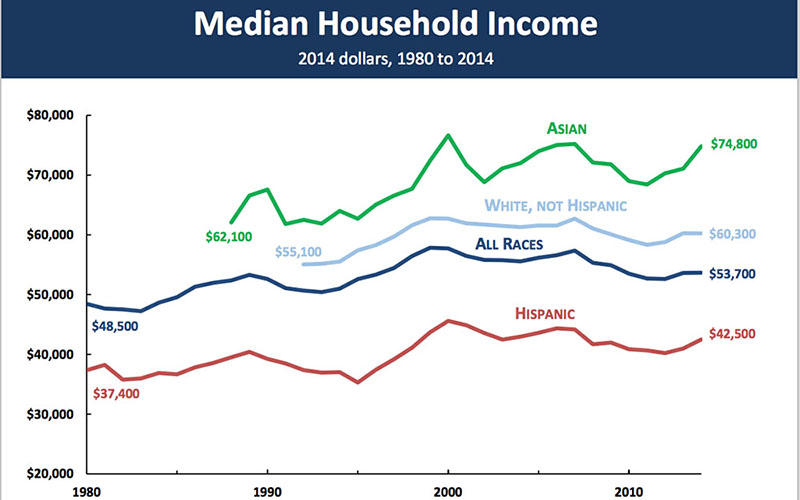 Despite rising high-school graduation and college enrollment rates, and more Latina businesses, Hispanics have not closed the income gap with other races, a new report says. (Chart courtesy the Joint Economic Committee of Congress) 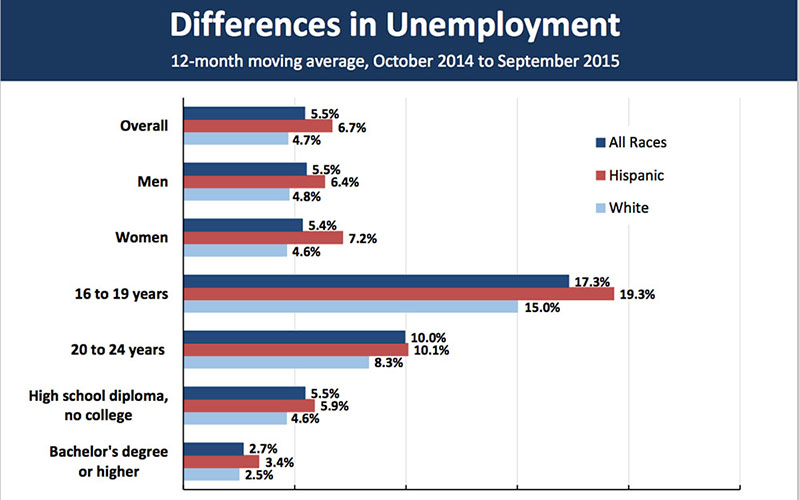 Hispanics had higher rates of unemployment over the past decade than most races, as well as across all age groups, according to the Congressional Hispanic Caucus. (Chart courtesy the Joint Economic Committee of Congress)

“Latinos are better educated than ever before. In many ways, we are moving forward,” said Rep. Loretta Sanchez, D-Calif., at the Congressional Hispanic Caucus’ release of “The Economic State of the Latino Community in America” report.

“But this last recession has really hurt the Latino-Hispanic community,” Sanchez said.

It certainly hurt Arizona’s Hispanics, who make up nearly one-third of the state’s population, said James Garcia, a spokesman for the Arizona Hispanic Chamber of Commerce.

“In terms of population proportion, we’re ahead of the national trend,” Garcia said. “But we’re also seeing some of the same trends in terms of economic impact.”

The report said the country’s Hispanics experienced less-severe losses than other groups during the recession, but that their job losses were significant nonetheless.

Garcia said rapid job growth over the past few years has led to a decline in unemployment among Hispanics, though the workforce isn’t necessarily the same as it was before the recession.

“One of the things that may have happened during the recession is that men, who were regular bread earners, got laid off,” said Garcia. “Women, it seems, stepped up.”

Garcia said Latinas own a majority of the 123,000 Hispanic-owned businesses his chamber estimates are operating in Arizona. But Latinas’ efforts have been “constrained by lower wages and fewer hours worked compared to white women,” according to the report.

Rep. Raul Grijalva, D-Tucson, said that is why Latino families continue to struggle to improve their economic well-being.

“The wage disparity – and wealth disparity – between Latino workers and their families compared to their white counterparts is staggering,” Grijalva said in a statement released by his office Wednesday.

The congressional report said the median household income for Arizona’s white population, at $55,300, was more than $16,000 higher than the median income of $39,200 for the state’s Hispanic households in 2014.

As a result, nearly 30 percent of Arizona’s Hispanic population lived in poverty last year, compared to roughly 11 percent of the state’s white population, the report said.

“Such inequality is immoral, unjustifiable and completely unsustainable for our society,” Grijalva, a Hispanic Caucus member, said in his statement. “This report highlights that fact, and hopefully will help lead to the solutions we desperately need.”

But Garcia said there are still “gains being made” by Hispanics in Arizona, despite the disparities.

For instance, he said, “more Latinos are seeking higher education” and “getting more educated.”

The college enrollment rate among Latinos nationally more than doubled over the past 25 years, and three in four U.S.-born Latinos now have a high school diploma, the report said.

“More of us are proportionately graduating from high school than ever before,” Garcia said. “There’s some good news … but we’re nowhere near where we need to be.”