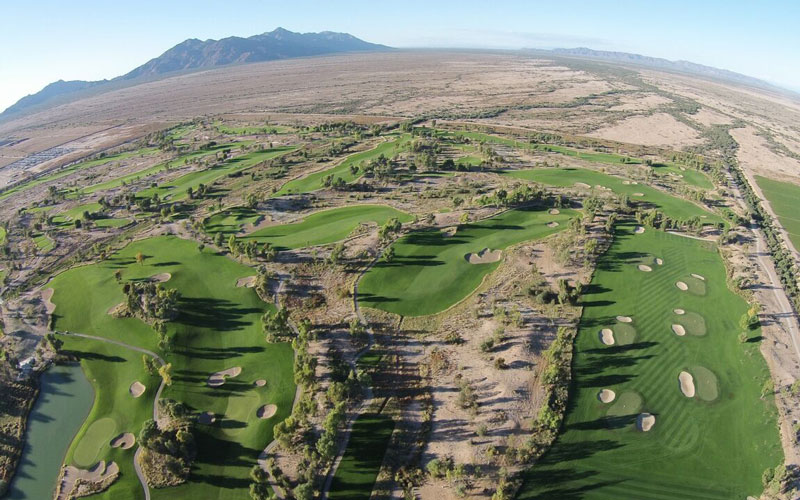 “There is, like, three major reasons that people don’t play golf. It takes too long, takes too much time and it’s too expensive, so #miniDunes eliminates those three issues,” said Rolland Vaughn, head golf professional at Ak-Chin Southern Dunes.

Southern Dunes is one of several golf businesses in the Valley attempting to reinvigorate the game through innovation and new business models. According to the National Golf Foundation, the United States has lost 5 million golfers in the past decade. In 2013, more golf courses closed than opened.

“The whole idea is to get people out there, with their phones, and listening to music, posting pictures on social media. The number one rule at #miniDunes is to have fun,” Vaughn said.

Troon North Golf Club in Scottsdale is also trying a different approach to attract golfers who simply don’t have the time to play a full 18-hole round of golf.

The Monument Express course offers a nine-hole experience that is significantly shorter in distance and time than the average round.

Mike Friend, director of sales at Troon North, said this concept helps players who are challenged on time and offers a less intimidating way for beginners to hone their game.

“We have changed things here to embrace the younger generation of golfer,” Friend said.

New technologies are also being used on the course as the game evolves.

“Our new fleet of carts that we have, actually have the USB port, so you can plug in your phone or plug in speakers and play music while you play golf,” Friend said.

Troon North unveiled new golf carts this month that are equipped with a GPS video screen to help golfers easily read distance to the pin and, ultimately, speed up their round.

Golf courses aren’t the only place where new ideas and technologies are changing the sport.

Topgolf, an international company based in the United Kingdom, opened in Scottsdale in 2014. Along with three bars and a restaurant, the two-level complex resembles a driving range and allows golfers to shoot microchip-embedded golf balls toward targets. Customers can engage in games like closest-to-the-pin and long drive challenges with scoring determined by the microchips.

“Topgolf can help the golf spectrum because it’s getting that club in people’s hands,’ said Jesse Hughes, director of instruction at Topgolf Scottsdale.

“It’s getting them right in the game, hands-on playing. It’s difficult for a beginner or somebody who’s not used to golf to make it to a golf course or a driving range without a specific purpose,” Hughes said.

Jeffery Sommer, an avid golfer who lives in Phoenix, enjoys the innovation and freedom at Topgolf.

“I just want to play, whether I am on the course for an hour or five, I just need to swing the clubs, anything to get people outside and off the couch is important,” Sommer said.

Sommer believes that Topgolf is introducing the game to a new demographic.

“This place offers a non-intimidating way to introduce the sport to the video-game generation at any skill level,” Sommer said.