Arizona scored well on a new national report card for programs that cut electric use, saving energy and saving consumers money on what one expert called a “rubber meets the road” measure of energy efficiency. (Photo by Michael Smith via flickr/Creative Commons) 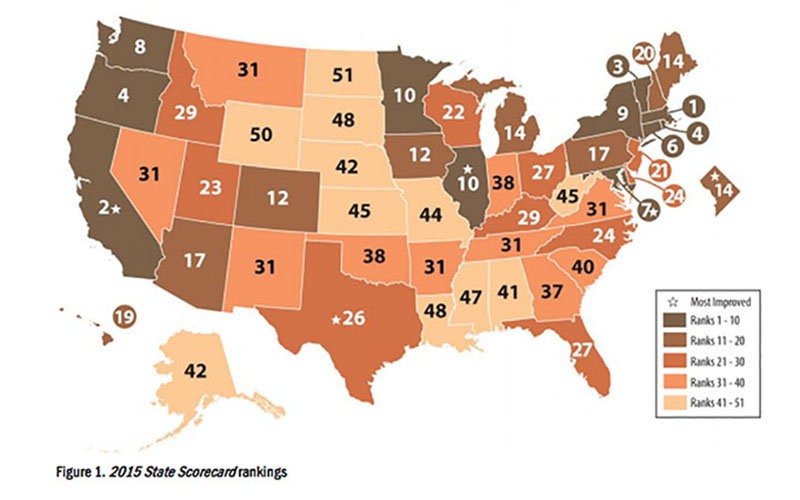 Arizona does several things well when it comes to energy efficiency, advocates say, but also has shortcomings that caused the state to slip to 17th place in an annual ranking. (Map courtesy the American Council for an Energy-Efficient Economy)

WASHINGTON – Arizona slipped two spots to 17th place in the 2015 State Energy Efficiency Scorecard released Wednesday, even though experts say the state still does very well in some areas.

The ninth annual report by the American Council for an Energy-Efficient Economy ranks states for public policy that improves “energy efficiency in our homes, businesses, industries and transportation systems,” measuring everything from building codes to mass transit to energy savings programs.

Arizona got 22 of 50 possible points, a drop of 1.5 points from last year’s report, falling into a tie with Pennsylvania. The report ranked all 50 states, Washington, D.C., Puerto Rico, Guam and the U.S. Virgin Islands in six categories.

Arizona’s score, and rank compared to other states and territories, on the six elements measured in the 2015 State Energy Efficiency Scorecard:

“On the most important rubber-meets-the-road criteria – actual savings delivered to customers – note that Arizona has a very high score,” Jeff Schlegal said in an email. Schlegal is an Arizona representative of the Southwest Energy Efficiency Project.

Schlegal pointed out that Arizona ranked fifth for electricity savings last year. The report said the state saved almost 1.2 million megawatt hours, or 1.57 percent of retail sales of electricity in 2014.

“This is a huge accomplishment for Arizona and the EE programs deliver large bill savings and other benefits to consumers and businesses,” Schlegal’s email said.

“Arizona has done a lot to move the ball forward on energy efficiency in recent years,” Bahr said. She said, however, that the state could improve transportation policies as well as building codes to encourage energy savings.

The scorecard said Arizona is tied with six other states at 43rd in terms of building codes and compliance – scoring just two points out of a possible seven.

“It is a harder task for a state government to ensure code adoption among 100 jurisdictions than it is to adopt a single code for the state,” said Annie Gilleo, the lead author of the 139-page scorecard. She also noted that there are two more recent version of the IECC – in 2012 and 2015 – so Arizona still lags behind.

Another area where experts said Arizona needs improvement is transportation policy, where the state finished in 25th place, getting a score of 3.5 out of a possible 10.

“There’s a number of places where good public transportation is not available” in the Phoenix area alone, Bahr said. She said the state needs to make an effort to build communities where “people can live and work and recreate … as opposed to driving long distances for everything.”

Only Massachusetts has a higher average annual target for electric savings for 2015 to 2020, with a goal of 2.6 percent in average annual savings. Arizona and Rhode Island were close behind with a target of 2.5 percent annual savings through 2020, according to the report.

“Arizona has some of the highest goals in the country,” Schlegal said.

“I’d just like to encourage us all to keep doubling down on these efforts for the coming year and build upon the tremendous progress we’re seeing across the country,” said Kathleen Hogan, the U.S. Department of Energy’s deputy assistant secretary for energy efficiency.

“We’ve made great strides and we have a good standard,” Bahr said of Arizona. “There’s always more work to do.”