House Majority Leader Kevin McCarthy, the front-runner in the race for House Speaker, pulled out of the race for the sake of unity for the fractured party. (Photo by CNN Newsource) 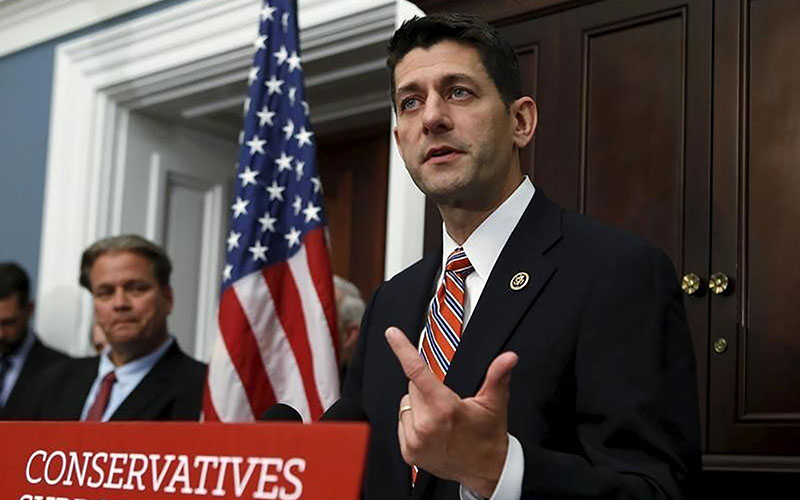 House Republicans are reportedly urging Rep. Paul Ryan, R-Wisc., to run for speaker, but Ryan has said he is happy as House Ways and Means Committee chairman. (Photo by Yuri Gripas/Reuters)

WASHINGTON – If most Americans see Congress as a joke, who better to lead it than a comedian?

That’s who Jeff Fearnow of Tucson suggested for the next speaker of the House – Sarah Silverman, a standup comedian, writer, producer and actress.

“Sarah Silverman (is) a woman who will have a comeback to every snide remark and have no shame when it comes to putting people in their place,” said Fearnow.

He added that he doesn’t reckon she wants the job. But she could have it if she did: As the House struggles to agree on a replacement for outgoing Speaker John Boehner, it has been noted that the Constitution does not require that person be a member of Congress.

So Fearnow and others who were asked by the Public Insight Network to suggest the next speaker, aside from a current member of Congress, didn’t hold back.

A previous version of this story misspelled the first name of the PIN respondent quoted in the sixth paragraph. His name is Joe Vazquez. The story has been corrected. Clients who used this story are asked to run the correction that can be found here.

“It takes a certain kind of personality to be speaker of the House,” said Joe Vazquez, an Arizona resident who suggested former late-night TV host and comedian Jon Stewart.

“He must have some free time,” Vazquez said of Stewart, whose more than 16-year tenure as the host of “The Daily Show with Jon Stewart” ended in August.

The role should be filled either by a “yes man” or someone who “for all intents and purposes won’t give a damn,” said Vazquez, who also suggested former Rep. Barney Frank and Sen. Alan Simpson, as well as Erskine Bowles, a former chief of staff to President Bill Clinton.

One thing all the respondents to the PIN query agreed on – they wouldn’t want the speaker’s job themselves.

“Herding cats is probably thankless and frustrating,” said Arizonan Simon Spanton, of a once-coveted position that is becoming increasingly difficult to fill.

Boehner announced last month that he would step down from the speakership after almost five years leading the fractious GOP majority and resign his congressional seat on Oct. 30.

Silent on the speaker

Article 1, Section 2, of the Constitution, does not require that the speaker be a member of Congress. It says only:

“The House of Representatives shall chuse their Speaker and other Officers; and shall have the sole Power of Impeachment.”

House Majority Leader Kevin McCarthy, R-California, the front-runner, withdrew just minutes before an Oct. 8 vote to select Boehner’s successor, after losing the support of the House Freedom Caucus, a group of approximately 40 conservatives who could have made the difference in the election.

Published reports say Rep. Paul Ryan, R-Wisconsin, the first choice of many House Republicans, may be open to running for the job after initially dismissing the idea.

James Thurber, director of the Center for Congressional and Presidential Studies at American University, said the speakership does not align with Ryan’s ambitions, however.

“At this point it seems that, Paul Ryan would rather remain as chairman of the Ways and Means Committee than take the speaker position,” Thurber said Monday.

For now, Rep. Jason Chaffetz, R-Utah, and Rep. Daniel Webster, R-Florida, are the only two who have officially announced bids for speaker.

Thurber said the state of the House is “really in full rebellion.” He said that there has not been another instance of such high drama surrounding a speaker’s race “in modern times, from FDR to present.”

The PIN respondents gave several explanations why finding a replacement for Boehner is proving difficult. Fearnow attributes it to “closet skeletons.” James Bennett, another PIN respondent, called the Republicans “a bunch of 4-year-olds.”

Vazquez sees the speakership as a sacrifice of power for some House members.

“Whether there are positions on current committees they are not willing to relinquish, or an understanding that most of the members of their own party would not listen to their leadership as speaker, any candidate for the position would a fool from a strategic political standpoint,” Vazquez said.

Whoever does secure the 218 votes needed to win the job of leading the “highly polarized” Congress will have a tall task according to Thurber.

“It’s hard to lead people who are … tribal in their behavior,” he said.