Paul Goldschmidt stands in the on-deck circle in a game against the Colorado Rockies on Thursday, Oct. 1, 2015. (Photo by Torrence Dunham/Cronkite News) 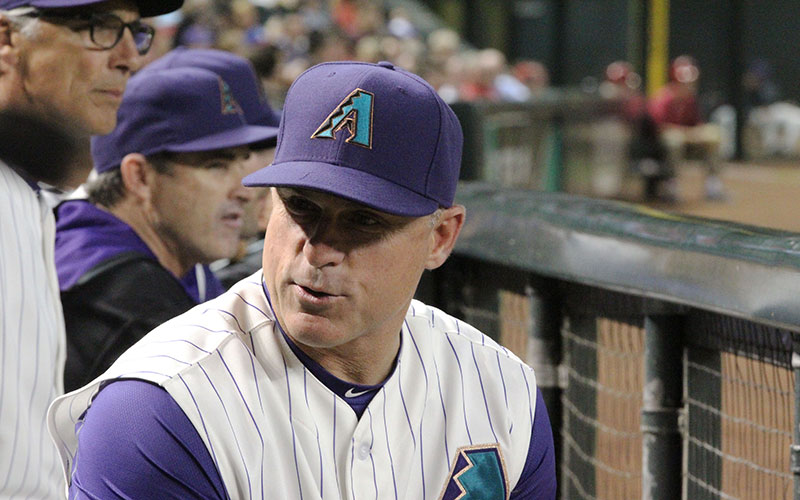 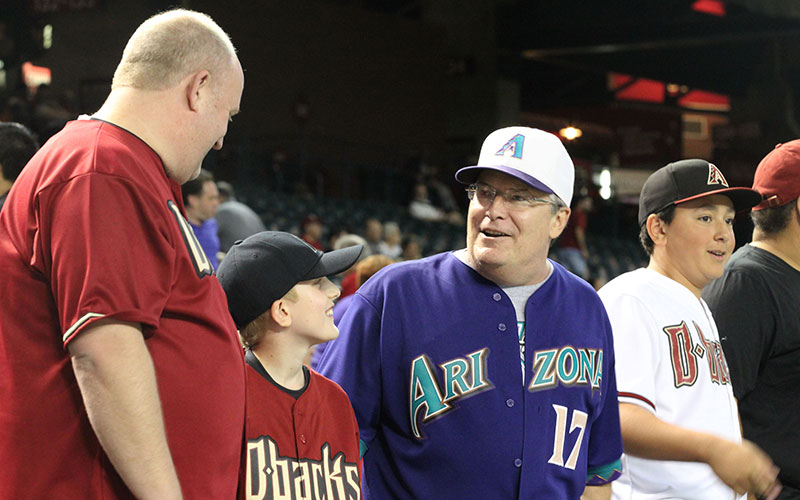 On “Throwback Thursdays” during the 2015 season a variety of Diamondbacks jerseys were seen in the stands. (Photo by Torrence Dunham/Cronkite News) 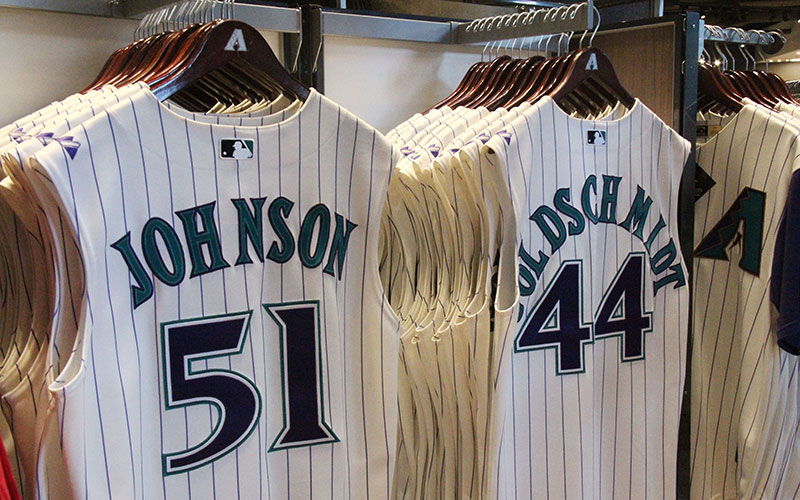 Jerseys of Diamondbacks greats past and present are available to purchase in the D-backs’ team store. (Photo by Torrence Dunham/Cronkite News) 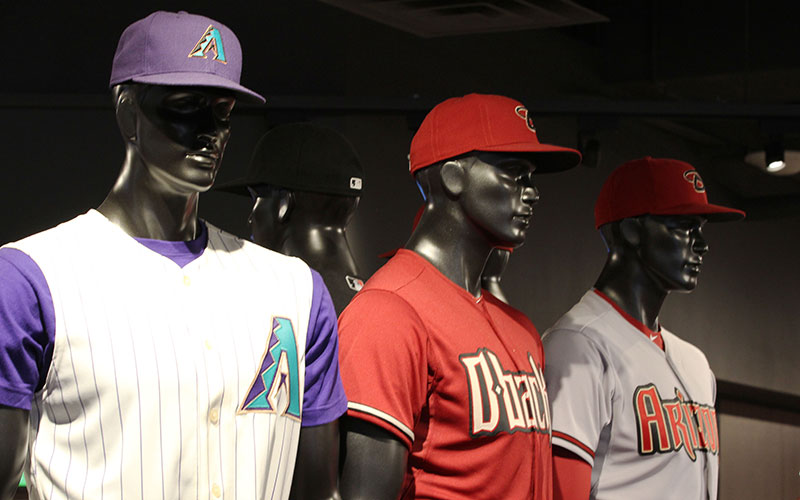 The Diamondbacks wore purple and teal jerseys until 2006, when they switched to their current Sedona red, Sonoran sand, black and white color scheme. (Photo by Torrence Dunham/Cronkite News) 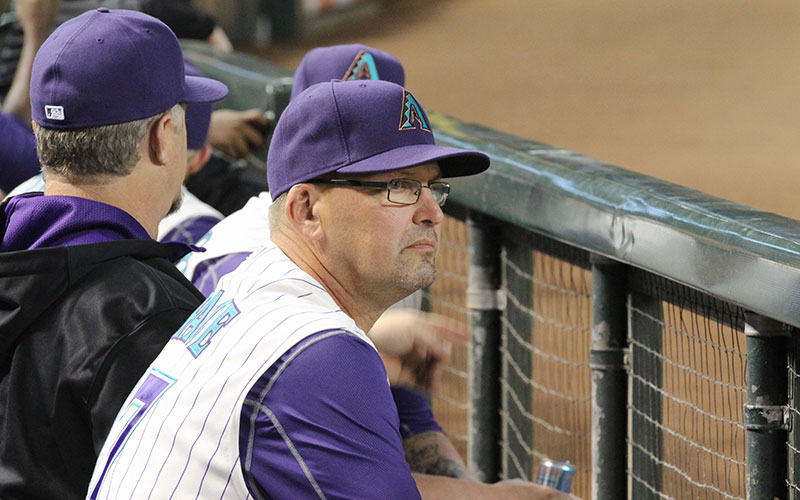 Diamondbacks assistant hitting coach Mark Grace looks on during a game against the Colorado Rockies on Oct. 1, 2015. (Photo by Torrence Dunham/Cronkite News) 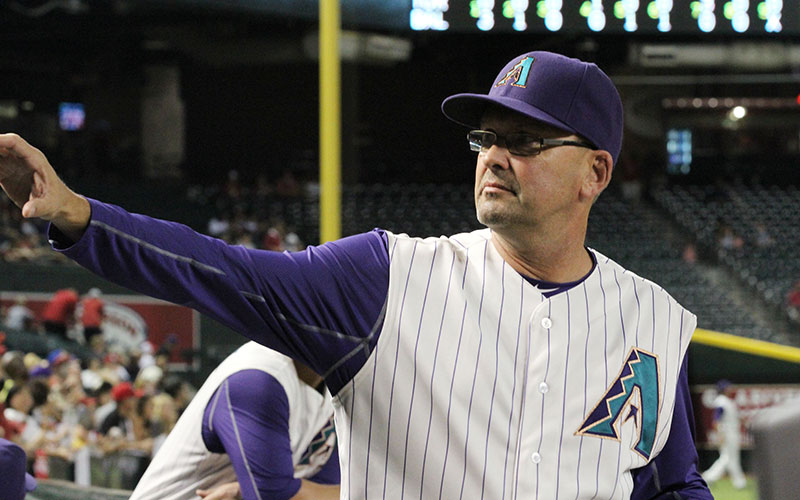 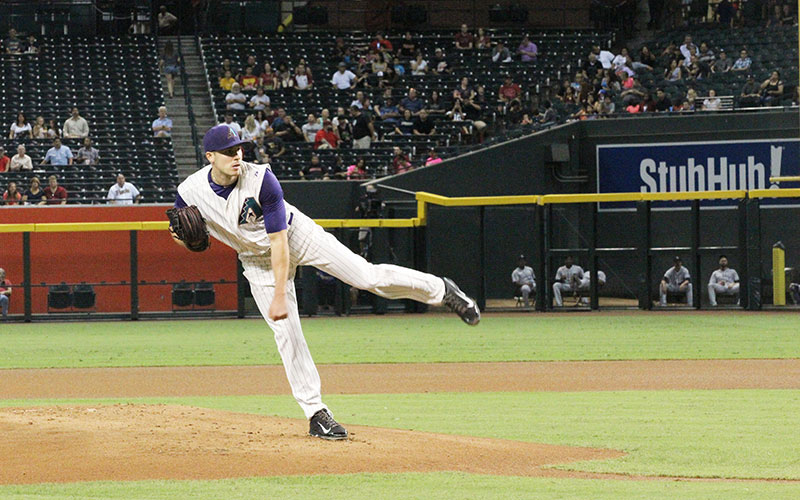 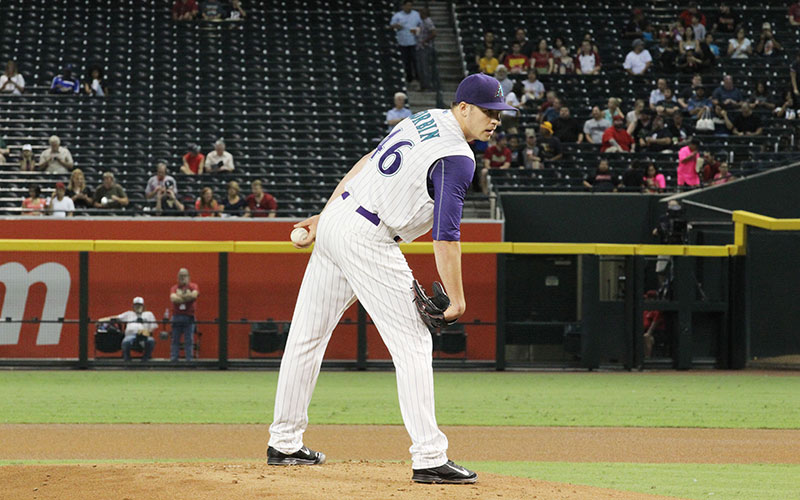 Patrick Corbin looks for signs from the catcher in a game against the Colorado Rockies. (Photo by Torrence Dunham/Cronkite News) 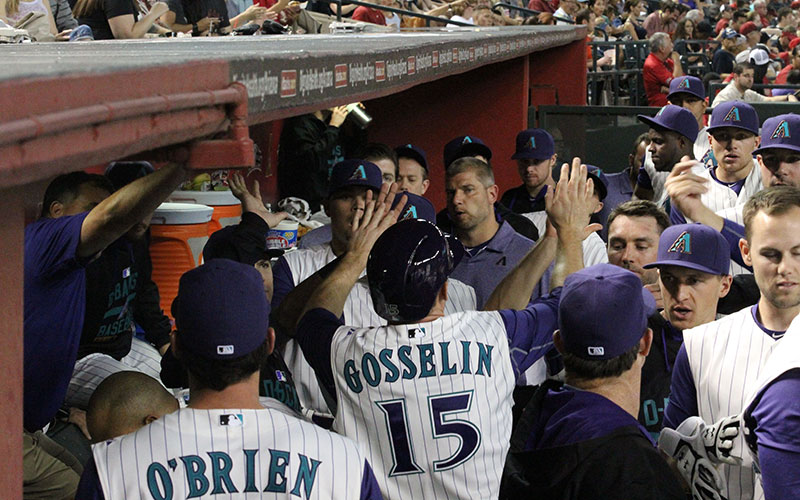 The Diamondbacks celebrate in the dugout during a “Throwback Thursday” game.(Cronkite News/Torrence Dunham)

Down by a run in the ninth inning of Game 7, Arizona’s Mark Grace started a comeback rally that would culminate in Luis Gonzalez’s World Series-winning broken-bat single. That game has been immortalized in Arizona sports history, along with the old purple-and-teal jerseys worn by the franchise’s only World Series winner.

“That uniform for me, represents one of the all-time great teams,” said Grace, now the Diamondbacks’ assistant hitting coach. “We were a great team and obviously beat a great team in the Yankees… so I proudly wear those colors.”

Fans of those colors rejoiced this year as the team wore throwback jerseys for each Thursday home game as part of its “Throwback Thursday” promotion.

The Diamondbacks wore the purple and teal from their inception in 1998 until the end of the 2006 season when the team switched to its current Sedona red, Sonoran sand, black and white color scheme. In addition to its only World Series crown, the team won its first three division titles in the purple and teal.

In the past, the Diamondbacks wore uniforms from their history on one weekend only as part of the franchise’s Reunion Weekend, which featured an alumni game with former Diamondback players. Fans were glad to see the old colors on a more regular basis this season.

“I loved it because I’ve been a D-backs fan from its inception and I really like the teal and purple combination,” fan Bobby Sullivan said. “When they said they were going to have ‘Throwback Thursdays’ it just was a perfect fit.”

“I watched the Diamondbacks as soon as the team started in ’98 because I lived here, and then all the way through college … my whole life really,” Gosewisch said.

The throwback games allowed him to put on the same jerseys he grew up watching on television.

“I think it’s cool and it’s neat for the fans,” Diamondbacks manager Chip Hale said. “And to let our players know there is a history here. Sometimes I think we forget. We got a World Series pretty quickly here and that’s what we are always striving for.”

“I like it. I like the idea of having it at least one day like they do,” Diamondbacks fan Terry Titus said. “Always remembering your past is a good thing.”