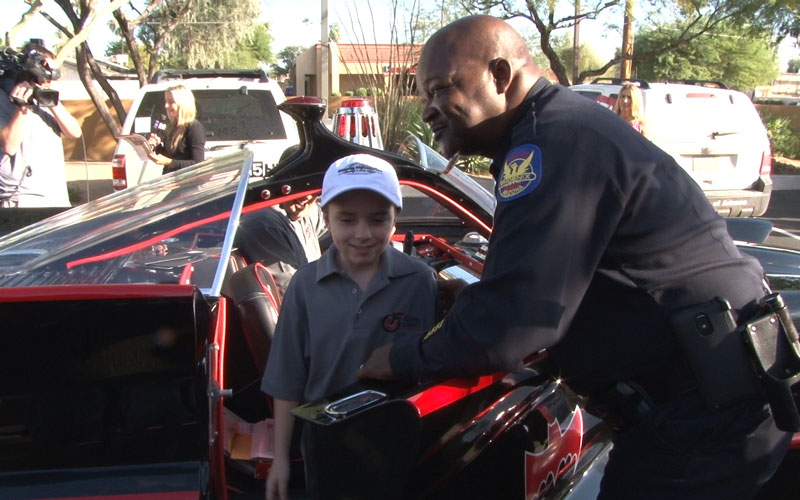 Tyson Copeland wanted to give back to the community. His one wish for his birthday this year was to raise money via mason jars to build a new bat cave with help from his community.

Charles Keller, the President of the Colton Cowell Foundation, believes that Tyson is a one-of-a-kind child, who wants to help the people around him.

“Tyson is such a special kid because what he has done is that he become part of a cause greater than himself,” Keller said. “Instead of being self indulgent on his birthday and worry about what presents he is going to get, he has gone out and raised 1,000 jars of change to help other kids just like him.”

Tyson has been battling medical issues since he was young. He was given the chance to visit the top-secret bat cave earlier this year. His experience was unforgettable and wanted to make sure other children could enjoy it as well.

“They have plans to build the bat cave bigger and there extending it and i wanted to help,” said Tyson. “It is just amazing that people decided to do this and i didn’t expect people to do this. Almost every state around the world is starting to fill jars and I’m like how to did it get to being like this.”

With contributions from the town of Gilbert, Phoenix Police and Midfirst Bank, Tyson has made a significant contribution to the Colton Cowell foundation.

“It just went all over,” said Tyson, who turned 11 years old on Wednesday. “People just started filling jars and I didn’t expect it to get this big immediately.”

The Colton Cowell Foundation, who is in charge of the project, hopes to submit plans for the new bat cave in early 2016.