The roundtail chub, whose dwindling range includes rivers in Arizona, would receive threatened status under the Endangered Species Act under a proposal by the U.S. Fish and Wildlife Service.
(Photo courtesy U.S. Forest Service) 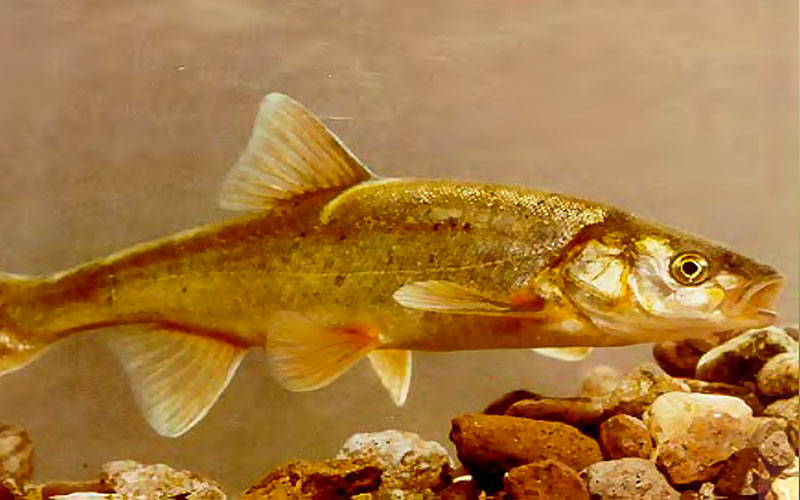 Roundtail and headwater chubs were added to a long list of endangered freshwater species in the Southwest, where most native aquatic and amphibious species that depend on the region’s streams and rivers are at risk.

Steve Spangle, field supervisor for the Wildlife Service, compared the minnows’ designation to moving a patient into an intensive care unit.

“We don’t consider listing the species as a win,” Spangle said. “You want to try to cure the patient before you have to use intensive care. But if you need to use it, you’re glad it’s there.”

Noah Greenwald, endangered species director at the CBD said in a press release that “Our long abuse of the Southwest’s desert rivers has taken a toll on the many plants and animals that depend on these oases, and these two fish are no exception.”

“I’m hopeful that Endangered Species Act protection for two more fish species will spur action to restore rivers that are the lifeblood of the region for people and other animals alike,” said Greenwald.

The Fish and Wildlife Service’s decision did not receive unanimous support.

Chris Cantrell, the chief of the fisheries branch for Arizona Game and Fish Department, said the finding was rushed and flawed.

“They failed to take into account all of the conservation efforts we’ve implemented in the past 10 years. The Service tracked the fish incorrectly, they did not take into account the ephemeral (seasonally dry) areas that these two species historically occupied,” Cantrell said.

The federal and state agencies have conflicting statistics on the areas these fish inhabit. The Wildlife Service said in its news release that the roundtail chub occupies 18 percent of its historical range. On the other hand, Cantrell said that the two species occupy about 50 percent of their historical range

“If the listing goes into effect, it will be the largest aquatic listing in Arizona’s history,” he said.

The roundtail chub, sometimes called the Verde trout, is an olive-grey minnow that grows up to 14 inches and was historically considered to be a common fish in the Lower Colorado Basin.

Headwater chubs are smaller, growing up to 8 inches with a dark-brown color. They inhabit tributaries of the Verde and San Carlos Rivers and parts of the upper Gila River in New Mexico.

The primary threat to these species is predation by non-native fish introduced to Arizona streams by fisherman looking to improve sportfishing, Spangle said. Headwater and roundtail chubs faced little predation previous to the introduction of smallmouth bass and German brown trout. With little instinct to escape, the populations dwindled as foreign predators hunted the chubs like fish in a barrel.

Members of the public are urged to submit comments and information concerning the proposed listing at www.regulations.gov under Docket No. FWS–R2–ES–2015–0148.