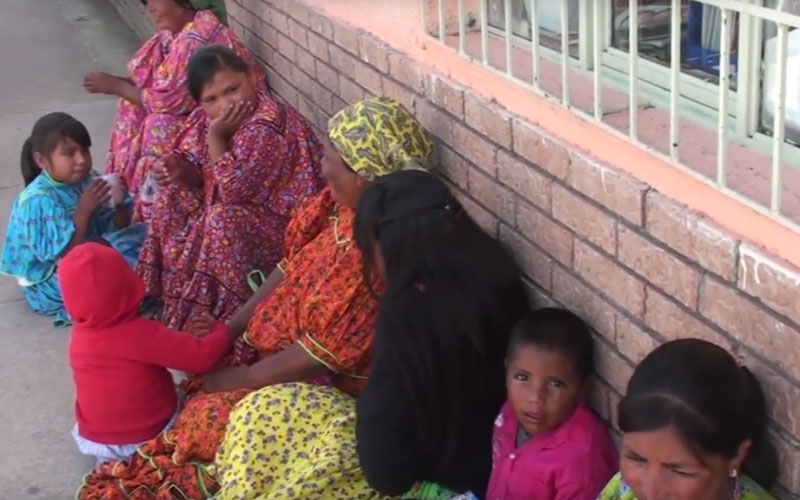 Natives are at risk of losing their indigenous languages in order to survive economically. (Photo by Yahaira Jacquez)

CARICHI, Mexico – Every fall Tarahumara Indians come down from their homes high in the Sierra Madre Mountains to help harvest apples.

“Knowing the language helped me a lot because before the Tarahumara didn’t know Spanish,” said Arsenio Jacquez, a native of Carichi.

Jacquez, my grandfather, learned the language as a child working on the family farm in the region. He’s served as an interpreter for several generations of Tarahumara families.

“You needed to speak in their language in order for them to understand you.”

And they needed help communicating with employers and others while in town.

“There are even indigenous schools. Their life is different now,” said Jacquez.

But there is a downside.

“It is estimated that, if nothing is done, half of 6000 plus languages spoken today will disappear by the end of this century,” according to a Unesco report.

And indigenous languages are among the most endangered as native people adopt the dominant language to survive economically.

“With the disappearance of unwritten and undocumented languages, humanity would lose not only a cultural wealth but also important ancestral knowledge embedded, in indigenous languages,” according to Unesco.
“It’s a lot harder for them to go on with their day-to-day lives just speaking that indigenous language so they adapt -similarly to immigrants here- and acculturate to the Spanish language” said Casanova. “So unfortunately that means losing the indigenous language,” said Saskias Casanova, an assistant professor at the School of Transborder Studies at ASU

The Mexican government passed the Law of Linguistic Rights of Indigenous People in 2003 and included the right to ask for documents in their native language.

“That law is very limited,” said Casanova. “The government in the translation from law to practice is lacking. It’s easy to have this law but it’s much harder to implement it across these communities.”

Casanova studies ethnic identity and the impact of acculturation on youth. Preserving native languages is not just about the past but also the future.

“This indigenous identity of these youth relies heavily on language because it is a huge marker of who they are,” she said.

My grandfather remains the only voice for Tarahumara people who do not speak Spanish in the small town of 1,600.

But these days many young people no longer need an interpreter.

“Sometimes I talk to them in Tarahumara and they answer back in Spanish,” he said.