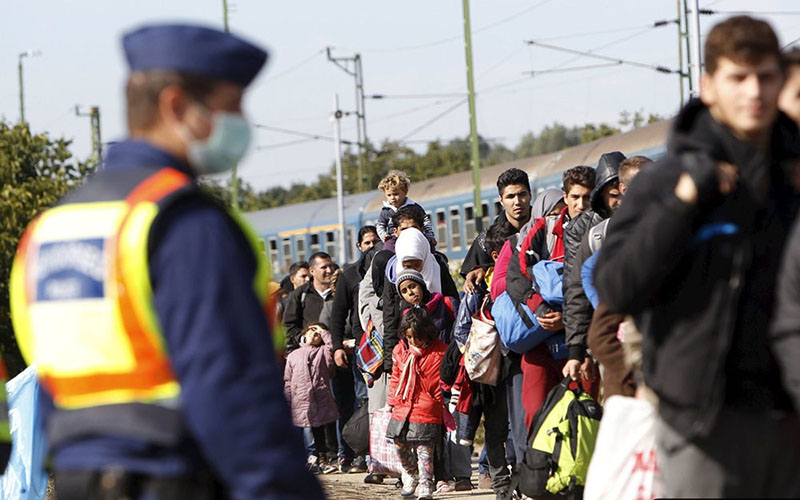 As a police officer looks on, migrants line up to board a train at the railway station in Zakany, Hungary, on Oct. 1.(Photo by Bernadett Szabo/Reuters) 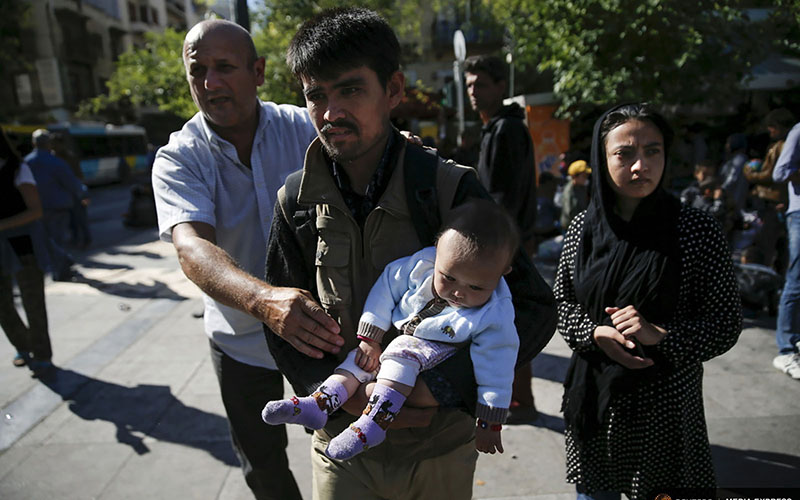 Afghan refugee Khodadad, 25, carries his baby as refugees moved from Victoria Square to an indoor stadium in Athens, Greece, on October 1. (Photo by Alkis Konstantinidis/Reuters)

WASHINGTON – The announcement this week that the U.S. will admit thousands more refugees in the coming year will likely mean hundreds more being resettled in Arizona – where relief agencies say they’re ready.

Driven by the crisis in Syria, President Barack Obama in his annual presidential directive to the State Department increased the ceiling on refugees from 70,000 in recent years to 85,000 for fiscal 2016, which started Thursday.

Arizona has received around 4.5 percent of the total refugees resettled in the U.S. over the last 10 years, for a total of more than 27,900 refugees in that time, according to figures from the State Department’s Refugee Processing Center, which tracks refugees resettling in the United States.

The numbers that Arizona will receive in fiscal 2016 are not known yet, but resettlement groups in the state say they expect to get the same 4 to 5 percent of the total, which would mean an increase of about 700 refugees this year.

“It will not be numbers that we can’t handle at all,” said Craig Thoresen, executive director of the Phoenix branch of Refugee Focus, a division of Lutheran Social Services of the Southwest.

He said the allocation of refugees follows “patterns have been established over many years,” and that the infrastructure is in place to Arizona to handle the higher numbers.

Lutheran Social Services is one of nine agencies that work nationally with the State Department to resettle refugees, four of which operate in Arizona. Donna Magnuson, executive director of the Phoenix branch of the International Rescue Committee, said the new refugee admissions ceiling announced this week “is a start.”

“The numbers could have been higher to include more Syrians,” Magnuson said. “This is only a drop in a very large crisis.”

Obama said the U.S. would accept at least 10,000 Syrians in the coming year and a State Department official confirmed that number, even though admissions by country are not spelled out in the president’s directive.

The order says the U.S. will admit 34,000 refugees from the Near East/South Asia region, where Syria is located. Other allocations are 25,000 refugees from Africa, 13,000 from East Asia, 4,000 from Europe/Central Asia and 3,000 from Latin America/Caribbean. The remaining 6,000 are not allocated to a specific region.

Number of refugees resettled in Arizona by fiscal year, according to the State Department’s Refugee Processing Center:

Arizona refugee organizations have helped resettle 140 Syrian refugees, or 7.6 percent of the national total of about 1,800 since the Syrian Civil War erupted in March of 2011, according to the Refugee Processing Center. Only four states have received more.

Some have raised concerns that Islamic militants might slip into the country under the guise that they are refugees. That argument was raised Thursday in a Senate Judiciary Committee hearing in which Sen. Charles Grassley, R-Iowa, said “ISIS and other terrorist groups have made it abundantly clear that they will use the refugee crisis to try to enter the United States.”

But State Department witnesses at that hearing said refugees go through a thorough background check before being admitted to this country. Magnuson said that even a fast-tracked application would take months and that it will more likely take 18 months for Syrians starting the process now to show up in Arizona in significant numbers.

Thoresen said the process can take even longer, citing one Syrian family that his group welcomed last month – three years after leaving Syria for Jordan.

“If you were ISIS there’s a lot quicker ways to come into the United States than a three-year process of getting refugee status through Jordan or Turkey or Lebanon,” he said. “Terrorists don’t come through refugee channels.”

Rep. Ruben Gallego, D-Phoenix, said that in addition to our “particular calling as a country to take in refugees,” the U.S. has a responsibility to accept its share. And we should welcome them, he said.

“Refugees when they come to the United States end up being the best citizens of this country,” Gallego said. “They’re so grateful to have the opportunity to live in a stable country that’s going to take care of them in their hour of need.”

Magnuson said her organization’s role is to help all refugees adjust to life in a “brand new environment,” emphasizing basic necessities of employment, education, language, as well as learning about things like leases and rent.

“The Syrians being one of those (populations), have done pretty well so far from what we’ve seen,” Magnuson said.

Gallego said the presence of middle class Syrians and other Middle Easterners would be a welcome addition to Phoenix. And Syrians have adapted to life well in Arizona, according to representatives from refugee processing centers in the state.

“We are a country of immigrants. We’re a country that took in some of the first refugees from all over the world,” Gallego said, “We should continue that legacy.”