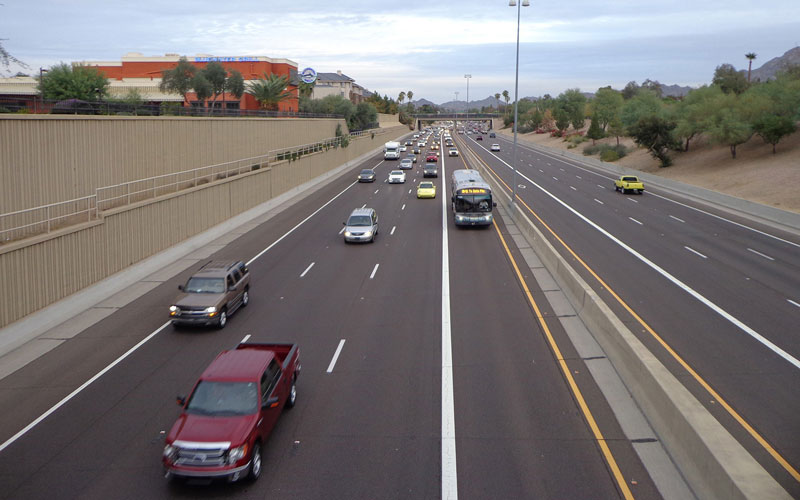 Congested streets cost drivers money by wasting time and fuel, and 41 percent of Arizona’s major urban highways are congested, according to the American Society of Civil Engineers.(Photo by Óscar A. Contreras/Cronkite News)

The Office of the Auditor General released an audit on Monday that projects a $62.7 billion shortfall through fiscal year 2035 if the state Legislature doesn’t pass new directives. The auditors recommended the state form a task force to address the problem.

State Rep. Karen Fann, R-Prescott, said something needs to change, even if voters don’t like it.

“People don’t realize it costs money to maintain roads,” Fann said. “The major problem we have with voters in our state is that they are predominantly for no new taxes.”

On its current course, ADOT will only receive $26.2 billion in revenue – from various federal and state taxes – by 2035. The department needs about $88.9 billion to maintain operations and develop new infrastructure, according to the audit.

ADOT officials said they were unavailable for comment. However, they said via email the department would help lawmakers look at potential solutions.

Fann, a member of the House transportation committee, said Interstate 11 – a proposed highway that could link Phoenix and Las Vegas – might make a good candidate for a public-private partnership. But without tolls, she said, it will be difficult to complete.

“It could be a very expensive project,” Fann said. “We could use some of our state resources to get it started, and I think we could attract a private investor. But then the question becomes, how do we pay them back?”

A state gas tax serves as one of the primary sources of revenue for ADOT, and it brings in 18 cents a gallon. Officials have not raised the tax since 1991.

Fann said this poses a problem because people are purchasing higher efficiency vehicles. Plus, Fann said since the tax is based on gallons purchased, higher fuel costs only hurt consumers at the pump without bringing in additional revenue for the state.

Every five years, ADOT submits a plan to the state that highlights priorities for the next 20 years. The department said it needs $260 million on preservation projects each year between fiscal years 2015 and 2025 to maintain the current system, according to the audit. Transportation officials likely will have trouble even meeting those obligations because they already have a backlog of projects.

The audit noted that driving on poorly maintained roads costs Arizona motorists about $1.5 billion annually in vehicle repairs and operating costs, according to the American Society of Civil Engineers.

The audit also noted that a well-designed transportation system “increases the mobility of goods in and out of the state, and transportation spending directly impacts the economy and job market.”

“Something is going to have to give,” Brossart said. “Transportation is critical to Arizona’s success. Cities and towns are starting to go it alone.”

“That doesn’t let the state off the hook though,” Brossart said.