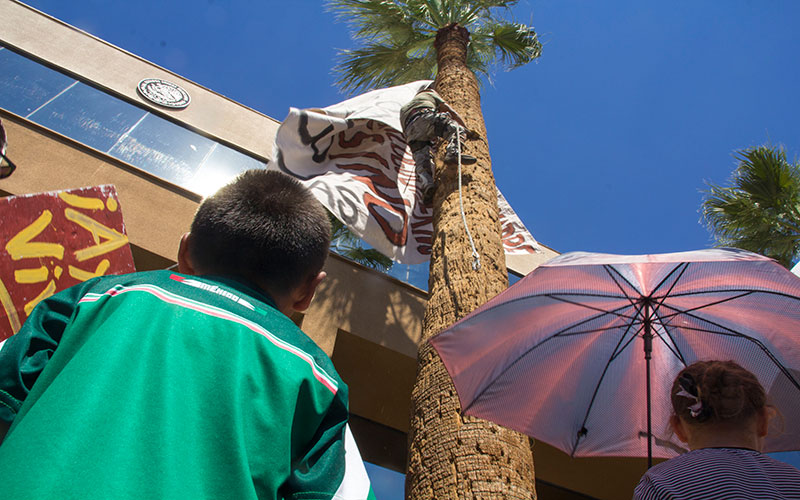 Children watch as Hector Gonzales hoists a banner up a palm tree in front of the Mexican Consulate.
(Photo by Alicia Clark/Cronkite News) 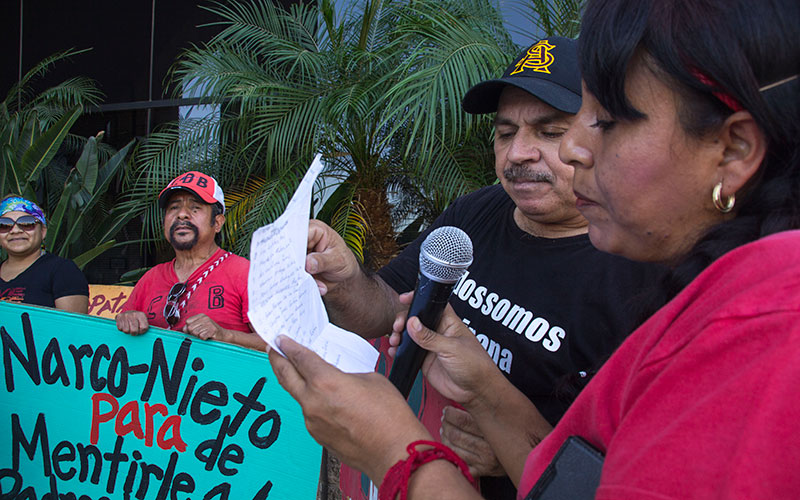 Raul Cordero assists in reading off the names of the missing students.
(Photo by Alicia Clark/Cronkite News) 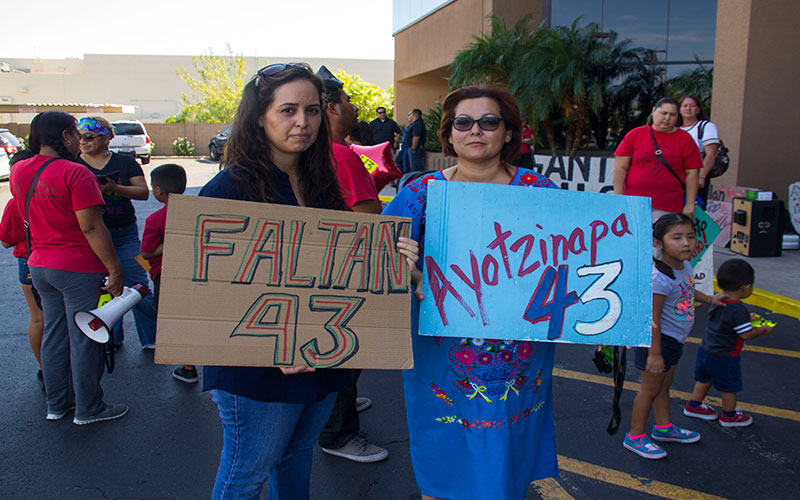 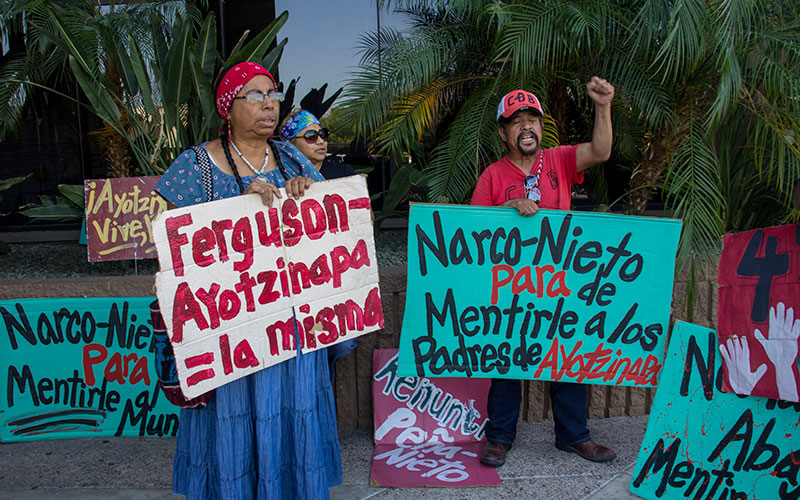 Sylvia Herrera holds a sign during a protest in front of the Mexican Consulate saying “Ferguson and Ayotzinapa are the same.” (Photo by Alicia Clark/Cronkite News)

“I’m not a very emotional person, but when I woke up this morning I felt very sentimental in my heart,” Gonzales said.
“Imagine if it was your child who went missing. Imagine if you didn’t know if your child was alive or dead if he was cold or hungry or thirsty.”

The pain of of tens of thousands of families in Mexico whose loved ones are missing is embodied in a case that stunned people on both sides of the border.

Saturday, Sept. 26, marked the one-year anniversary of the disappearance of 43 mostly indigenous students from Ayotzinapa Rural Teachers’ College in the state of Guerrero, Mexico.

A year later, their families, human rights groups and demonstrators on both sides of the border demand justice.

Protesters from the Comites de Defensa del Barrio, or CDB, an offshoot of Tonatierra, an organization advocating for the rights of indigenous peoples, congregated in front of the Mexican Consulate in downtown Phoenix.

It was just one of several demonstrations large and small taking place across the world on the anniversary of the students’ disappearance. CDB has been holding protests in front of the Mexican Consulate every Friday since the students disappeared.

Protesters carried signs, chanted and sang, denouncing the disappearance of the students and the Mexican government’s failure to fully investigate the case.

Many waved colorful handmade signs calling for the resignation of Mexican President Enrique Peña Nieto and demanding answers from the Mexican government.

“I stand in solidarity with the parents (of the missing students) because I have a son in university in Mexico,” said Cipriano Gonzalez, a Phoenix resident and CDB activist.

Gonzalez gave up a day’s wages to be at the protest and showed up wearing white painter’s coveralls . It was also his birthday. A year ago when the 43 students went missing he turned 43.

“For me it hurts and and it makes me think what if it was my son who had been taken? The pain and anguish the parents must feel,” Gonzalez said.

When he addressed the crowd several of the protesters were moved to tears including parents carrying babies and small children in their arms.

The older kids ran around tossing balloons in the air and waving signs.

Hector Gonzalez and Elvia Chavez, originally from Guerrero, brought their family of young children to the protest. The couple wanted to show their children the power of standing up for their beliefs.

“We want to set an example for our children not to be silent,” Chavez said.

Before starting their march to Tonatierra headquarters on Seventh and McKinley streets, Gonzalez buckled himself into a harness and scaled two palm trees to hang a large banner.

The protesters looked up into the bright sky shielding their eyes from the falling palm tree debris watching as Gonzalez strung the banner up on one tree and then the other.

The banner read: “We’ve had it up to here with the narco-government murders. We are missing 43 and more.”

“It’s important that we resolve this problem of disappearances, and it’s not just the missing 43 students,” said Raul Cordero, CDB member.

Cordero led most of the chants and songs and spoke of the international outrage over the missing students in Mexico.