Brad Wright and Phoenix Mayor Greg Stanton unveil the map of Championship Campus that will be in downtown Phoenix for the College Football Playoff National Championship Game. (Photo by Evan Webeck/Cronkite News) 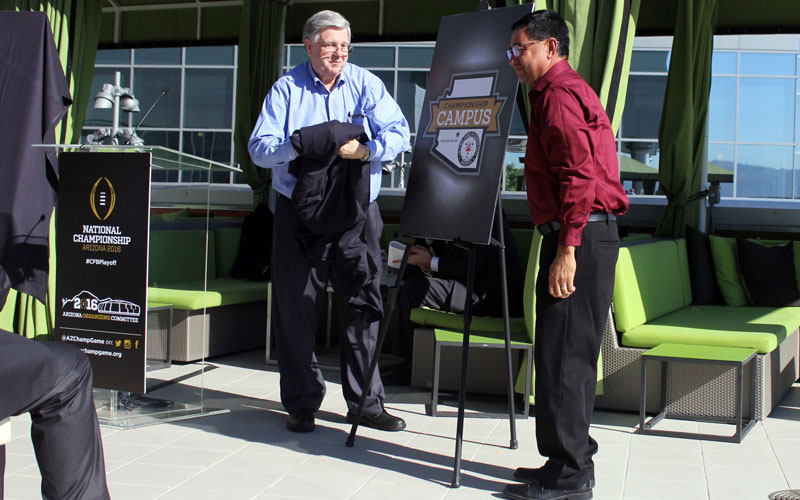 Win Holden and Robert Miguel unveil the official logo of the Championship Campus that will be in downtown Phoenix from Jan. 8-10 for the College Football Playoff. (Photo by Evan Webeck/Cronkite News) 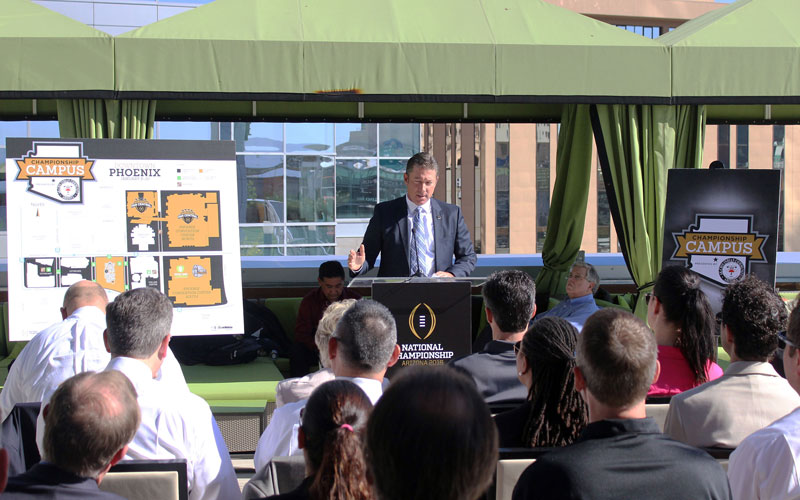 The Arizona Organizing Committee is trying to replicate the success earlier this year of the Super Bowl Host Committee. It held major events associated with Super Bowl XLIX in Phoenix, rather than near University of Phoenix Stadium in Glendale where the game was played and where the college championship game will be played in 2016.

Included in the Championship Campus, which runs Jan. 8-10, will be events similar to those staged at Super Bowl Central last winter. At the Phoenix Convention Center, in place of the NFL Experience, will be Playoff Fan Central. Adjacent to CityScape, where Pepsi hosted “Hyped For Halftime” concerts, will be “AT&T Playoff Playlist Live,” which organizers say will host shows featuring prominent artists.

The Super Bowl brought $720 million in economic impact to the Valley, according to a study by Arizona State University’s W.P. Carey School of Business. Brad Wright, co-chair of the Arizona Organizing Committee, expects the National Championship Game to have similar success.

“The last four BCS National Championship Games we hosted generated over $646 million,” Wright said. “We’re convinced that now this has moved to a four-day experience, this will generate a significant economic impact.”

Economic impact is both immediate and residual, Wright said. The influx of 1 million fans to downtown Phoenix for Super Bowl Central had immediate impact, while the opportunity to expose the market to companies outside of Arizona provides much of the residual benefit.

In addition to following in Super Bowl XLIX’s footsteps by hosting events downtown, the AOC is also repeating its CEO program, designed to bring in CEOs from across the country and showcase Arizona as a place of business and potentially attract companies to move to the state.

“We watched closely what they did last year,” Wright said. “We learned some of the things that worked well … and we’re trying to do our best to take those up a notch.”

The Super Bowl Host Committee reached out to Native American tribes around the state to help last year. Having jumped at the opportunity to partner with the Super Bowl, the Ak-Chin Indian Community was quick to once again place itself in the football spotlight.

Ak-Chin Council Member Robert Miguel said that sponsoring events such as the Championship Campus is a way of giving back to the community that gave the tribe’s economy a tremendous boost when it passed Proposition 202 in 2002, legalizing gaming in Arizona.

That took the Ak-Chin from what Miguel called a farming tribe to one whose name now adorns the Ak-Chin Pavilion and the Championship Campus and is able to provide services to its community it wasn’t able to before.

When the AOC approached the Ak-Chin about sponsoring the Championship Campus, its council voted a unanimous yes.

“It was kind of a no-brainer to support this,” Miguel said. For him, the perfect scenario would have included the University of Arizona or Arizona State, but “three weeks into the season, I don’t think that’s going to happen.”