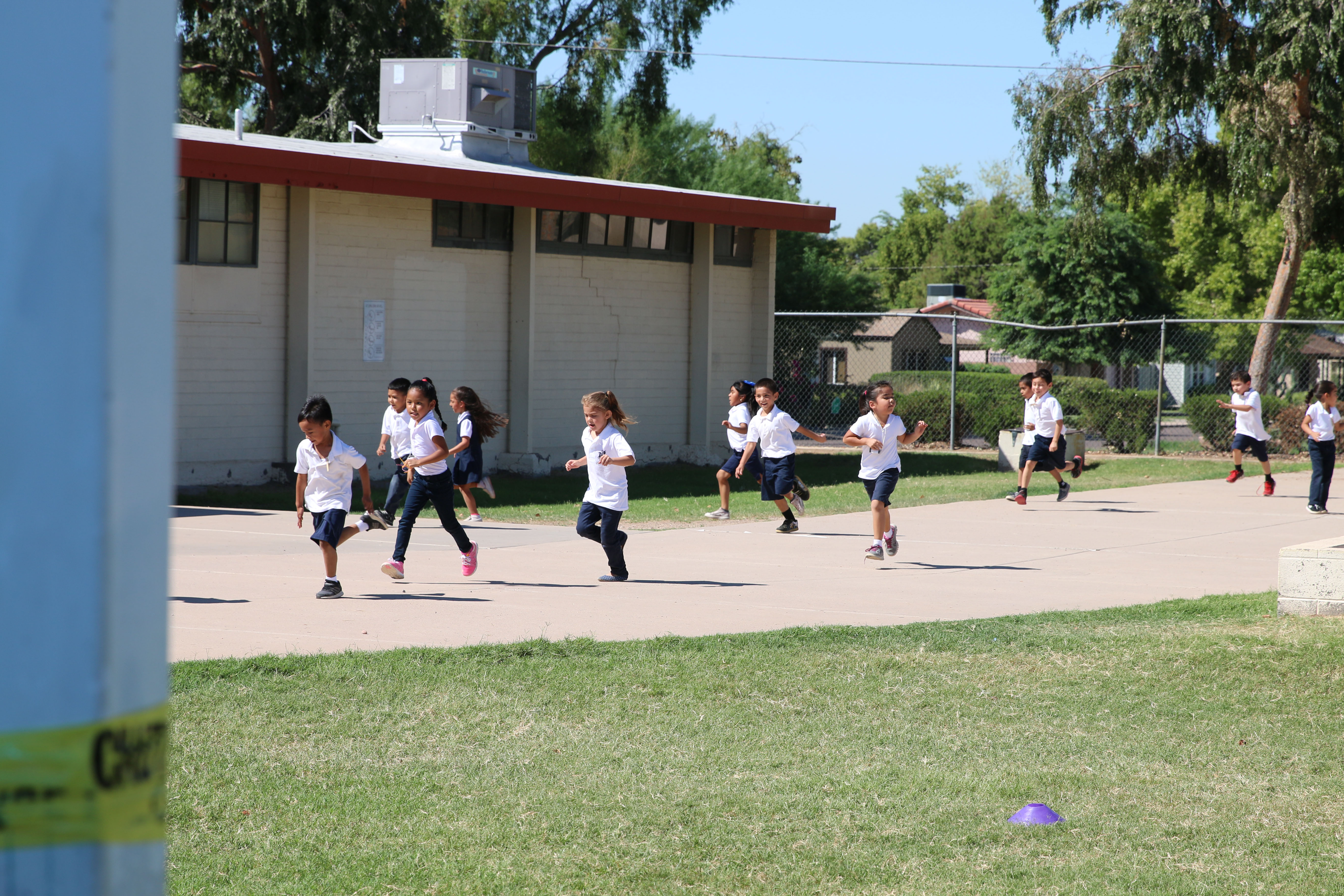 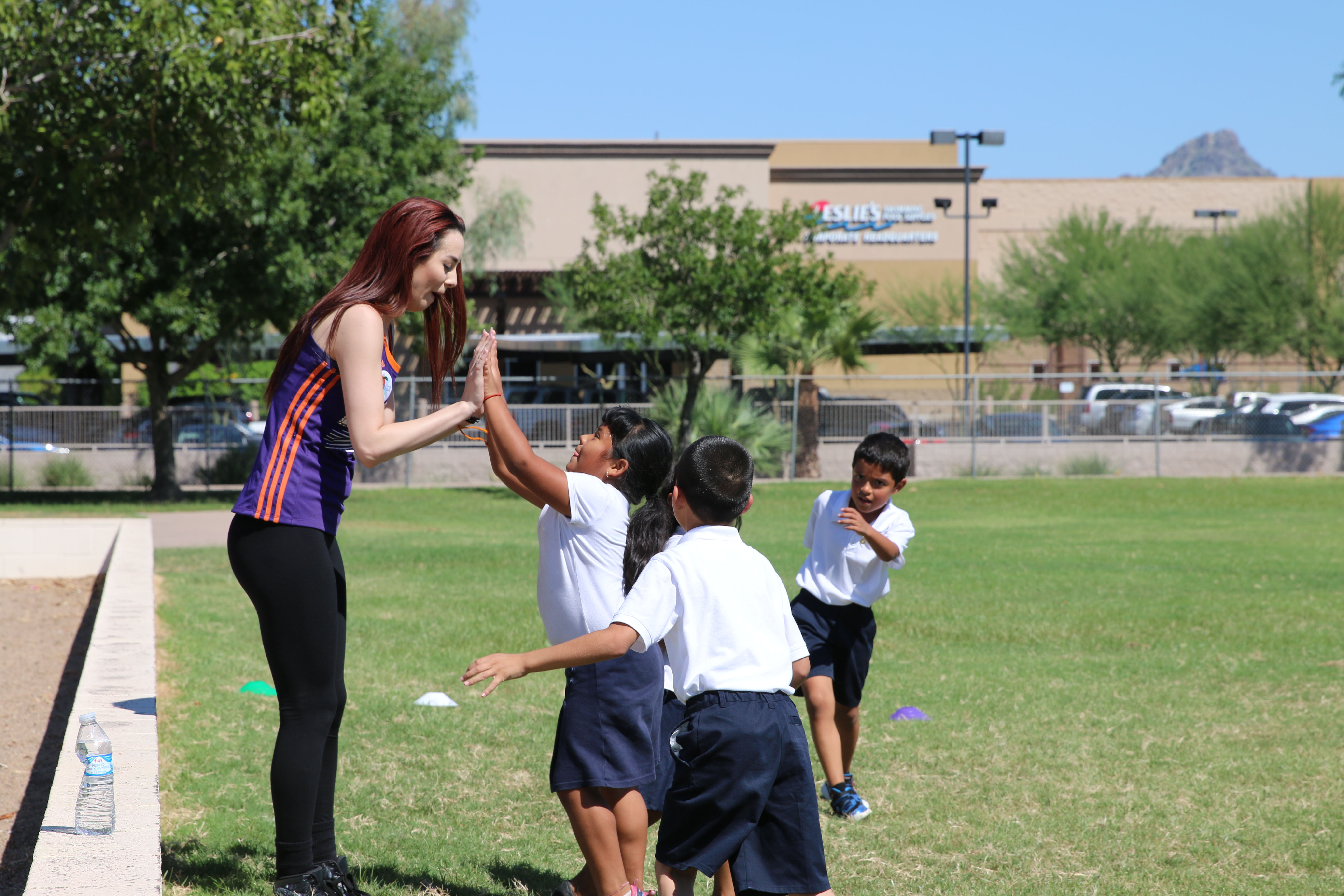 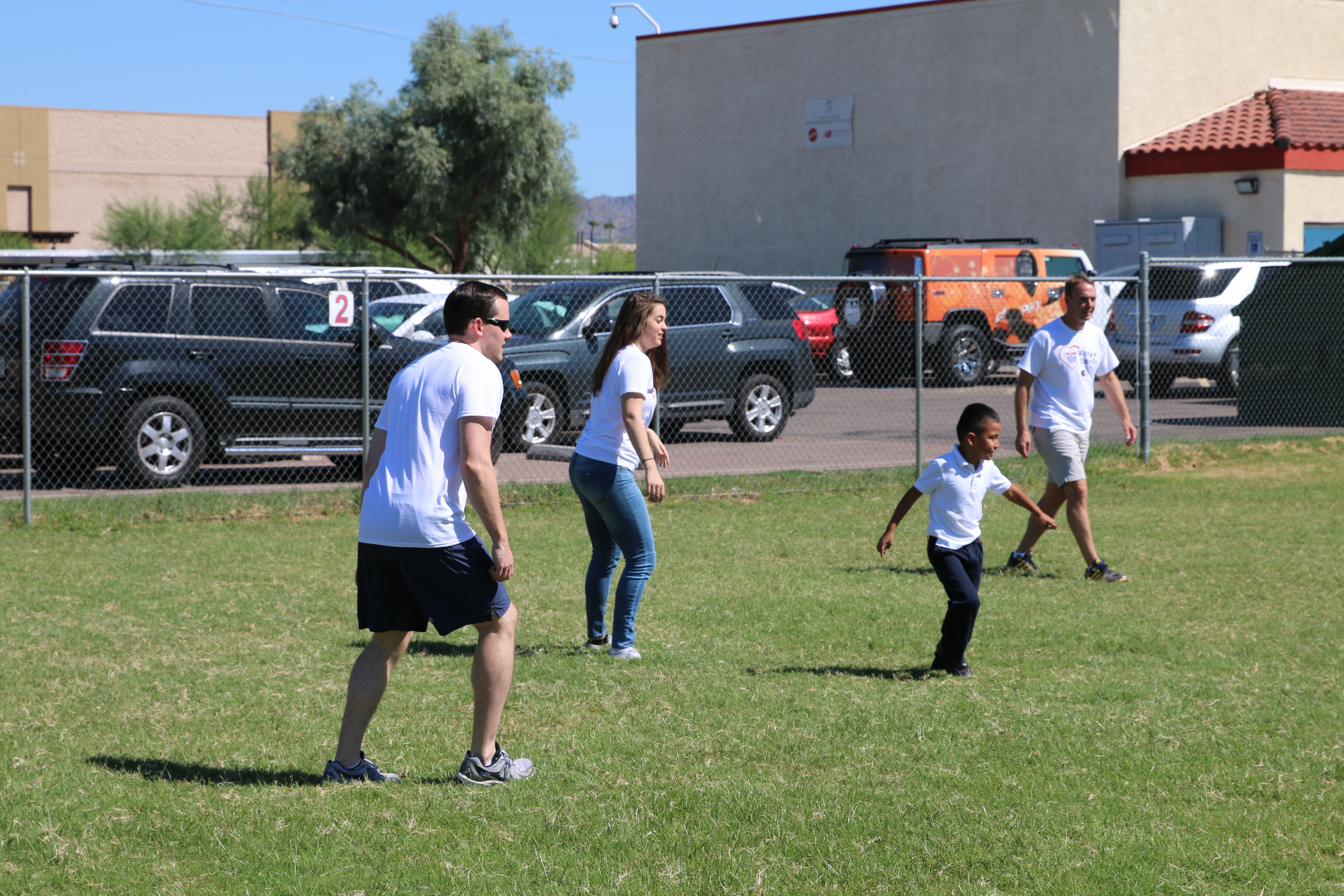 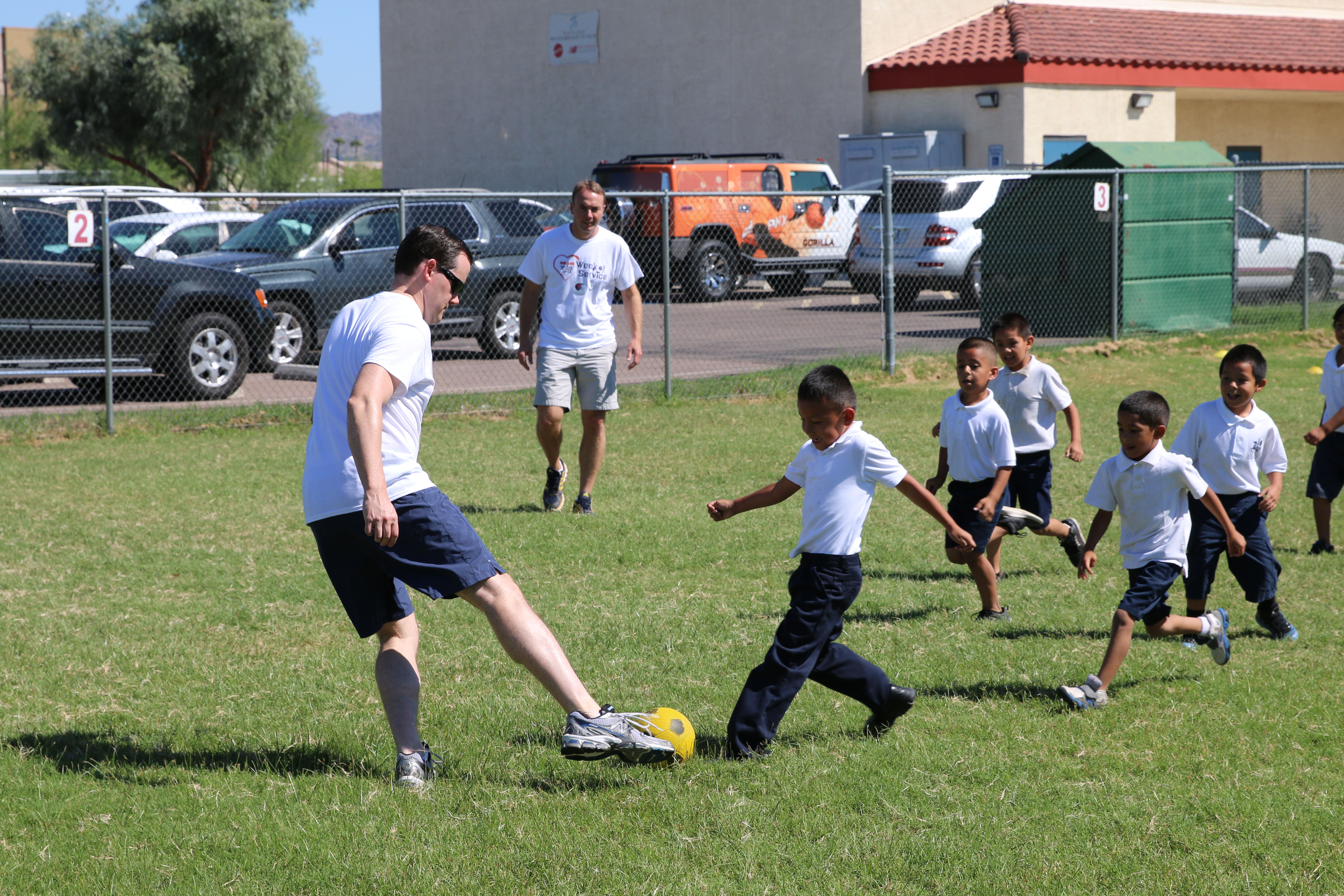 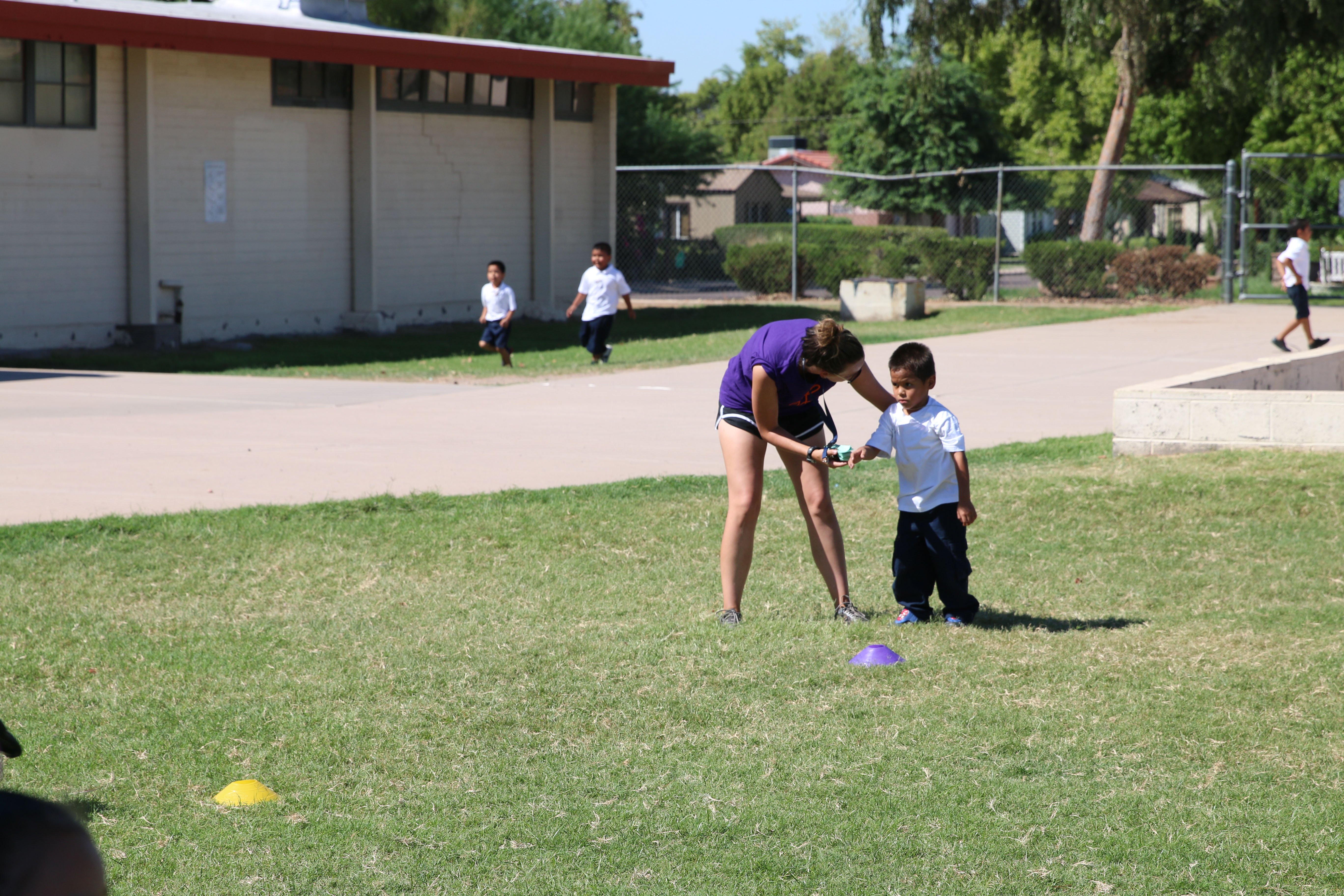 A Playworks coach talks with a student at Loma Linda Elementary. (Photo by Kevin Jimenez) 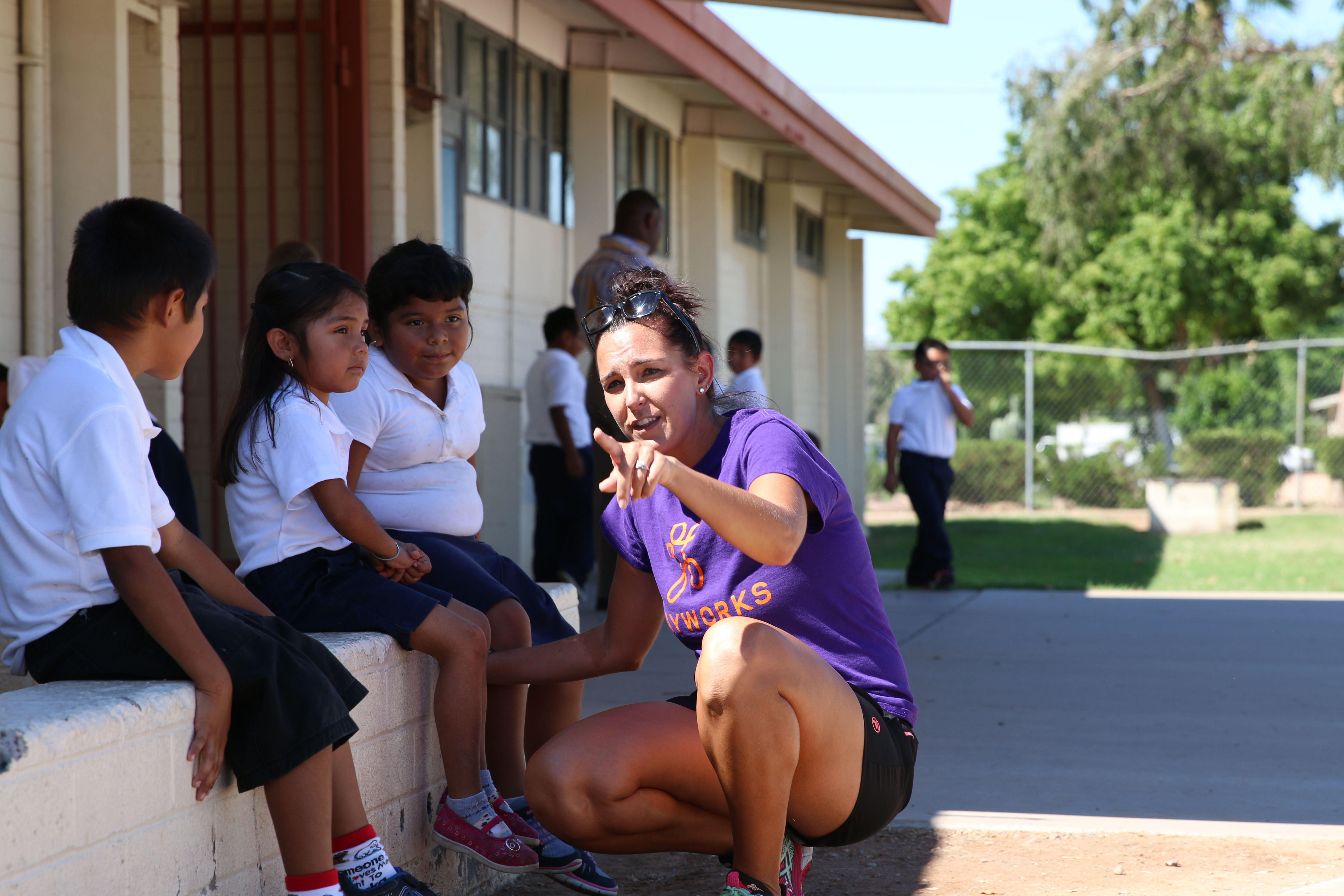 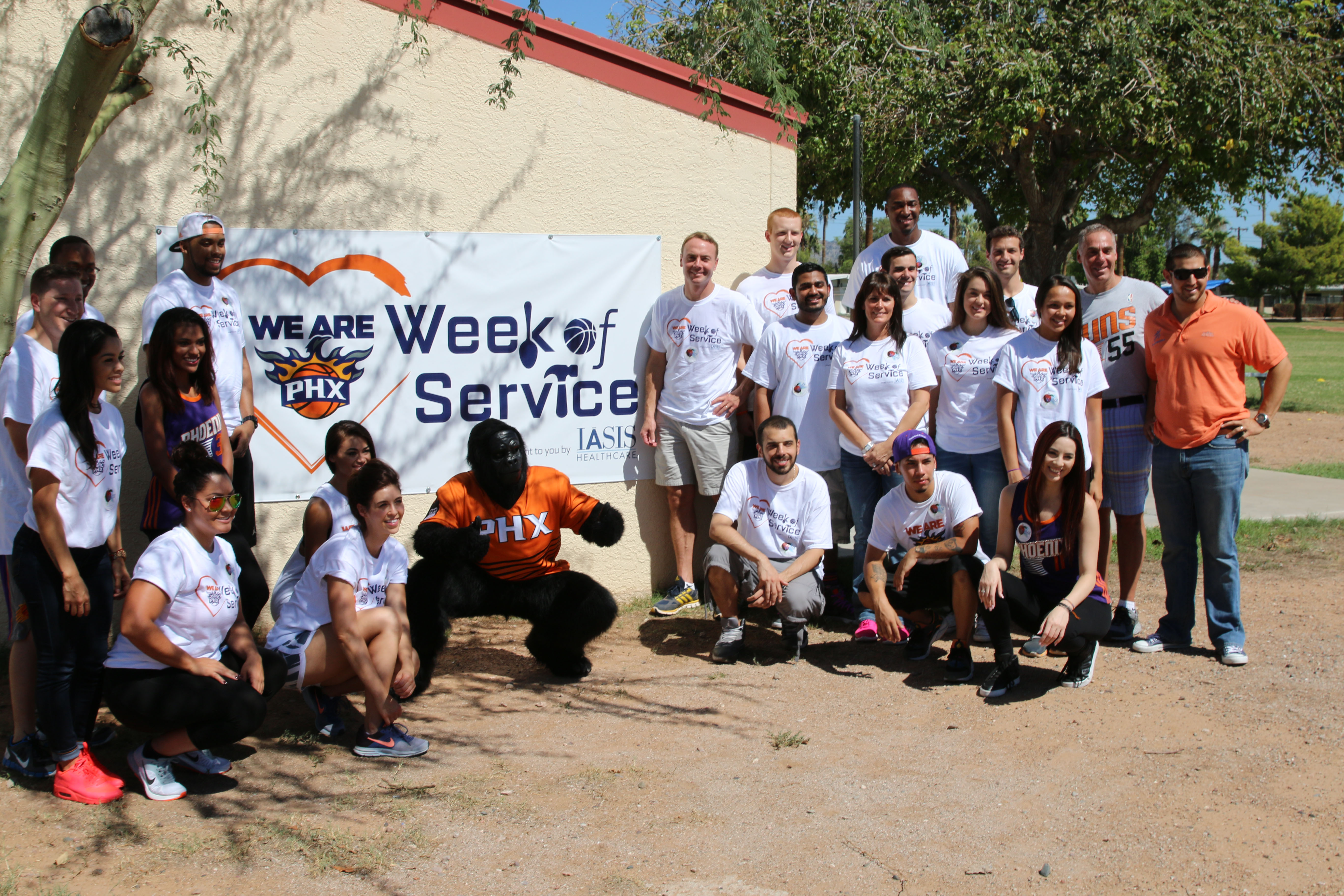 Suns volunteers take a photo for their week of service at Loma Linda Elementary. (Photo by Kevin Jimenez)

“It’s all positive. There is a lot of high-fiving a lot of congratulating each other, and these kids have unbelievable attitudes. I think it’s as fun and enjoyable for us as it is for them,” McDonough said on the team’s visit to the school with Playworks as part of the team’s Week of Service.

Founded in 1996 in Oakland, Playworks is a nonprofit organization that provides trained, full-time coaches focused on recess to hundreds of low-income schools in major urban areas.

Playworks works to change the culture of schools by integrating a full-time Playworks coach on campus. This coach enhances and transforms recess and play into a positive experience that helps kids and teachers get the most out of every learning opportunity.

“We teach kids the importance of rock, paper, scissors conflict resolution strategies. We engage them in play and overall create a safe environment that is emotionally safe and physically safe at recess,” said Paul Bork, program director for Playworks Arizona. “That way they transition back into the classroom ready to learn and there is less problems for administrators and teachers to deal with.”

This safe environment was something that did not exist at Loma Linda before Playworks arrived, according to Principal Stephanie De Mar, who said the school had a problem with bullying and safety.

“It wasn’t safe, especially the playground during recess time. It wasn’t a safe environment for kids. There were no opportunities for them to engage in games, De Mar said. “Whoever brought the soccer ball got to play and say who could play and everyone else was excluded.”

De Mar said things are different now after Playworks came into the school.

“We saw almost an immediate change. Almost within a few weeks you could see that kids were engaged in games because they had opportunities and they felt safe engaging in those opportunities,” De Mar said.

The quick improvement is not uncommon for schools that work with Playworks, according to Bork.

“We see results oftentimes within the first week. It can take a couple days, it can take a week, but really you start to see the results right away when you have a Playworks program come into a school,” Bork said.

The key to this is changing how the kids play during recess. Since Playworks came to Arizona in 2005 they have been integrated into 28 different schools and, according to the organization, these schools have seen bullying reduced by 43 percent.

“We have schools that before we go in they have 2,000 office referrals. We had schools the following year then have 200 referrals,” Bork said.