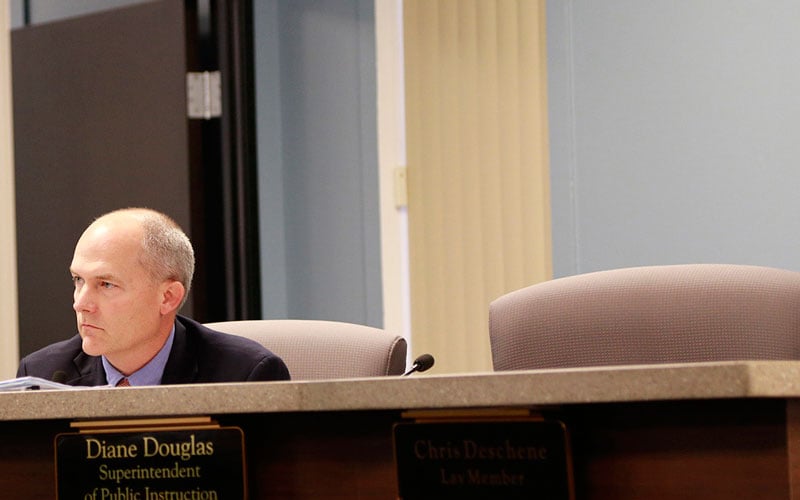 Superintendent of Public Instruction Diane Douglas missed Monday’s meeting of the Arizona State Board of Education, leading several members to note their disapproval.

“I am astonished and I find it regrettable that the department is not here, participating in work that is designed to enhance education for the children in this state,” said Reginald Ballantyne III, the board’s vice president.

He noted that Douglas had submitted an agenda item dealing with rulemaking procedures for structured English immersion programs.

“I’m concerned there we’re at our approval of policy and we have nothing coming out of our department on how it’s going to be enforced or even implemented,” Rottweiler said.

Douglas, a voting member who directs the state Department of Education, has been at odds with the board since taking office in January, including trying unsuccessfully to fire the board’s executive director and deputy director before Gov. Doug Ducey said she lacked that authority.

At its last meeting, which Douglas also didn’t attend, the board voted to authorize two lawsuits against the superintendent if she didn’t comply with longstanding directives to give board investigators remote access to department data and fully redirect traffic to the board’s independent website.

As Douglas’ disputes with the board continued, board staff members moved out of the Department of Education building and into the State Capitol Executive Tower.

“As an elected Constitutional officer, Superintendent Douglas sits on several education boards and commissions,” the email said. “She is not always able to attend every meeting of every board and always considers the matters being discussed when finalizing her schedule.”

The email said the board’s agenda “was once again full of items that will not positively impact Arizona students” and that Douglas attended an afternoon meeting of the Arizona State Board for Charter Schools.

The board’s president, Greg Miller, said Douglas needs to to be in attendance with solutions, clarifications and decisions on matters listed on meeting agendas and to be accountable for carrying out the board’s mandates.

“And her absence is case in point,” he said.