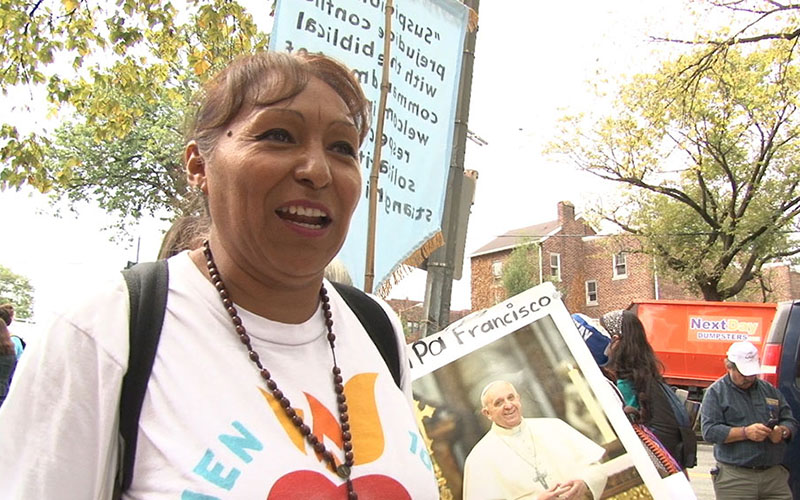 Maria Cruz Ramirez was one of 100 women who marched 100 miles from a deportation detention center in Pennsylvania to a shrine in Washington where the pope will speak. (Photo by Adriana Barajas) 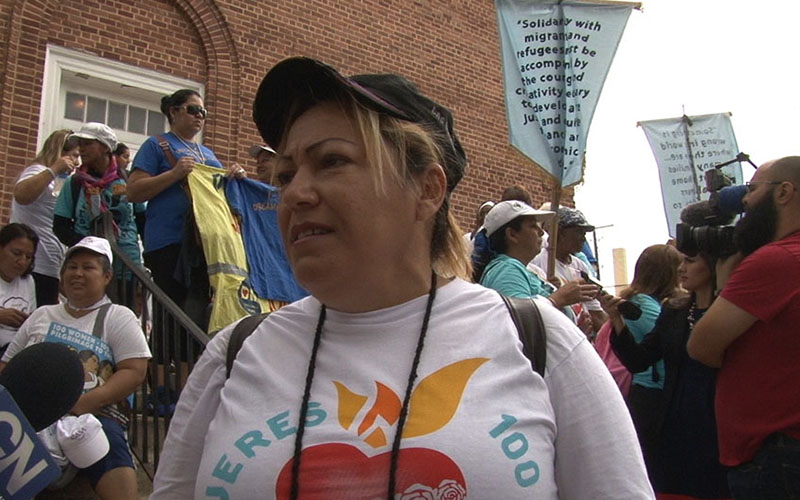 Maria Elena Apodaca of Phoenix said she has not seen her husband or brother-in-law since they were deported five years ago after being stopped for traffic violations. (Photo by Adriana Barajas)

WASHINGTON – They were tired, hungry and sleepy, but the 100 women nearing the end of a 100-mile walk Tuesday weren’t complaining.

That’s because they said they knew that others whose families have been separated by deportation were suffering more than they were.

“What motivated me was my family, my children, my community, and the pain and suffering of those families who, and people who, are in detention centers and who have left family, kids and spouses behind,” said Maria Cruz Ramirez, a Phoenix resident who was taking part in the march organized by “We Belong Together.”

The march began a week earlier at a federal detention center near York, Pennsylvania, where immigrants are held awaiting deportation. The 100 women came from all over the United States, including at least three from Arizona.

The marchers were among the tens of thousands who are expected to come to Washington this week for the visit of Pope Francis, on the first leg of a five-day tour that will include stops in New York and Philadelphia.

Many, like the women marchers, are coming to press an issue while the pope is in town, with causes ranging from social justice to pro-life reforms to climate change.

For women like Cruz Ramirez and Maria Elena Apodaca, they hope the march can bring injustices they said they have suffered under this country’s immigration system to the attention of Pope Francis – and the world at large.

“It’s been five years since my husband and brother-in-law were deported to Mexico,” after being stopped for traffic violations, said Apodaca, a Phoenix resident originally from Mexico.

The pain of that separation for her family was one reason she joined the march, in hopes of advocating for other families who may be going through the same thing.

“The other reason I came was because of the injustices that are happening in Arizona,” she said during a brief stop at church on North Capitol Street in Washington. “Deportations and families being separated.”

“It’s been almost one week since I’ve been walking,” she said. “I was one of many women who didn’t give up.”

Their ultimate goal was almost within sight, the Basilica of the National Shrine of the Immaculate Conception, where Pope Francis is scheduled to celebrate a Mass on Wednesday afternoon and confer sainthood on Junipero Serra.

Thousands are expected at papal events – he will also be at the White House on Wednesday and will address Congress on Thursday – and tickets for most events were gone long ago. The marchers said they knew they were not going to meet the pope – but they still hoped their message would be heard.

That message was to urge Pope Francis to advocate for immigrants and work to bring justice to those who are being affected by immigration policy. But they also hoped that other women would join their cause.

“Women of Arizona please don’t give up the fight,” Cruz Ramirez said. “We need to have the strength and power to make our dreams possible with our families here in the United States.”

Apodaca said she wanted to “tell those women to come out and to stop being afraid.”

“I was afraid once but I overcame that and I am here now,” she said, before starting down the sidewalk for the last leg of the journey.