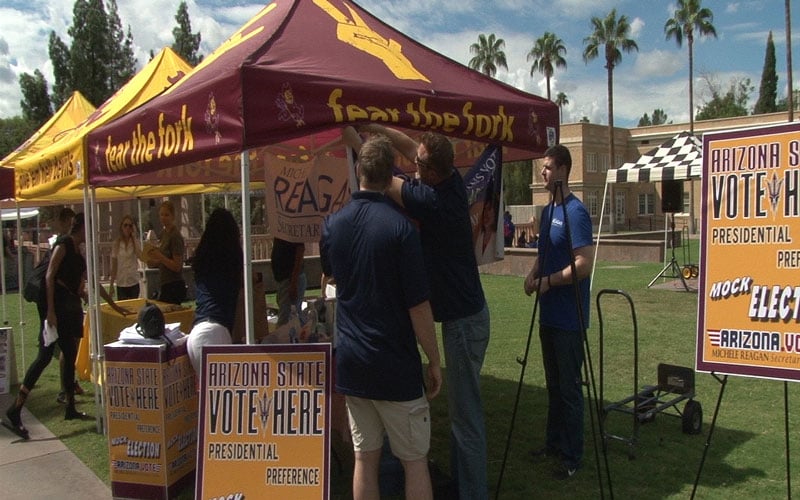 Tuesday was National Voter Registration Day. According to the Secretary of State’s Office, only 50 percent of Arizonans currently vote. The data also shows that in 2014 non-presidential election, only 3.9 percent of 1.5 million votes were cast by people between the ages of 18-25.

The Undergraduate Student Government at Arizona State University, along with the Secretary of State’s Office held a mock election on ASU’s Tempe campus. Tuesday’s event, with a theme of voter participation, was also an opportunity for people to register to vote in the upcoming primary election.

Marissa Fullford, vice president of services for the Undergraduate Student Government, was one of many who gathered outside to encourage her peers to register.

“Time and time again,” Fuller said, “students are the lowest turnout for voters, and I think we have a real opportunity to make a change if all the students went out and voted.”

CNN also made an appearance at the event, bringing in “Campaign Camper,” an RV that is traveling across the country. It has been converted into an interview booth where people can propose questions for the upcoming presidential debates.

CNN producer Topher Guak-Rouger said it’s important for people to register to vote and to participate in elections.

“Everyone needs to have their voice heard,” Guak-Rouger said. “Ultimately that’s what it comes down to. People do have the opportunity to be heard and to register to vote is really the only way to ensure that’s going to happen and make sure everything you care about is said and is out there.”