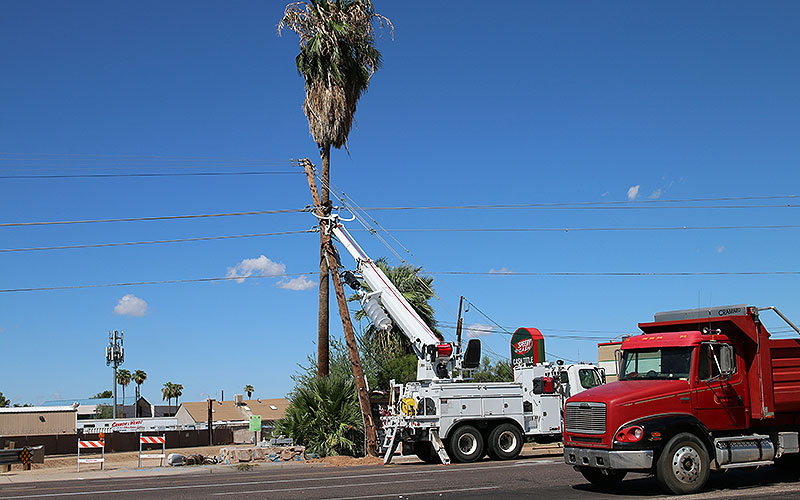 An Arizona Public Service truck works with a power pole broken at its base by a monsoon storm that hit Phoenix on Sept. 14, 2015. (Photo by Claire Cleveland/Cronkite News) 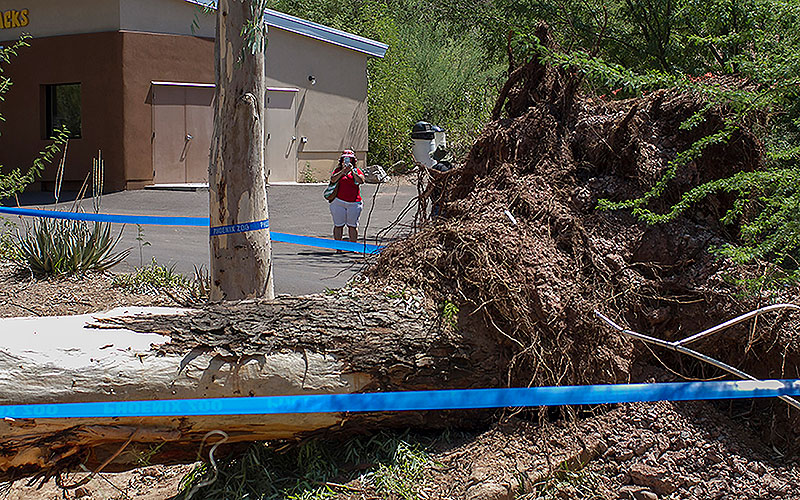 A visitor at the Phoenix Zoo takes a photo of a fallen tree Sept. 4, 2015, after a monsoon storm damaged the park. (Photo by Thomas Hawthorne/Cronkite News)

This year’s monsoon season has made headlines for downpours, damage and even tragedy, with the deadly flash flooding around Colorado City. But is its intensity worse than other years?

According to Zack Guido, a climatologist with the University of Arizona’s Institute of the Environment and Climate Assessment for the Southwest, it isn’t.

What makes this year’s monsoon seem different, he said, is more a function of where storms have hit.

“The 13 storms that have occurred this year are not more intense than they were last year,” Guido said. “On many days it’s raining somewhere, so if you are getting social media somebody is being like: ‘Big storm!’ And that’s occurring on a lot of days.”

In 2014, the National Weather Service recorded the third-highest precipitation since 1947 at its Phoenix Sky Harbor International Airport station, Guido said. Phoenix had 6.35 inches of rain, with 4.5 inches of it coming in September when remnants of a hurricane blew in.

“All monsoons have their own unique flavor,” he said.

For Arizona Public Service, where storms have hit, particularly of late, has been a challenge. The latest storm, which hit the Valley on Monday night, left 15,000 customers without power at its height due to downed power lines.

APS replaces downed wood poles with steel poles to better prepare for the next storm, she added.

While the monsoon season lasts from June 15 to the end of the September, rainstorms may well continue because of the El Niño weather patterns over the Pacific Ocean. Those are expected to alter the atmospheric flow and send more precipitation over the Southwest, said Ken Waters, a National Weather Service climatologist in Arizona.

“All indications are that it’s going to continue on right into the winter,” Waters said.