St. Mary’s Basilica, next to the Roman Catholic Diocese of Phoenix offices in downtown Phoenix, holds mass at noon during the week. (Photo by Bailey Netsch/Cronkite News) 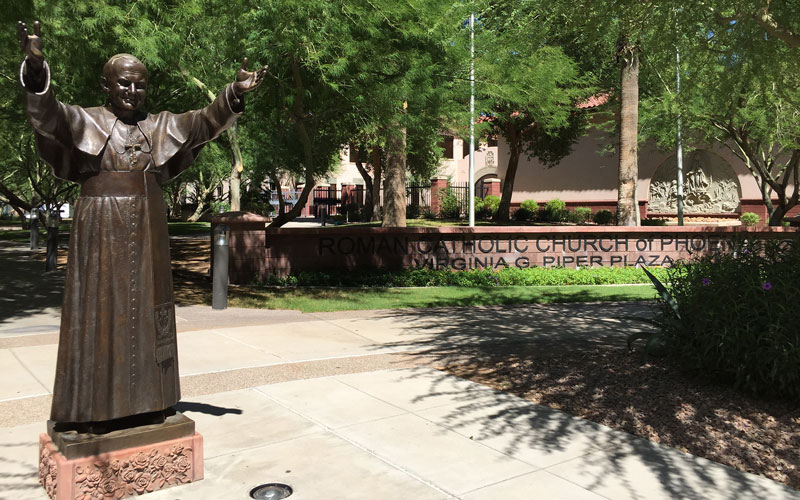 Pereyra was hired in 2014 by the Phoenix bishop to harness this growth and lead Hispanic outreach efforts including a large social media presence with websites and programs in Spanish. The goal is to make the entire diocese website bilingual.

“The first need is the need for language accommodation. It’s a great need, and it starts with the mass,” said Pereyra.

According to Pereyra, across Phoenix there are around 50-60 parishes that have a least one Mass a week in Spanish.

“That is one of the beauties of being a Catholic. No matter where you go, you have the same Mass, the same Eucharist, the same church,” said Rodrigo Vela, a Phoenix parishioner of St. Mary’s Basilica.

Over the last seven years, the number of Hispanic Catholics in America has grown in new ways, revealing new trends in how U.S. Catholicism is evolving. According to a recent Pew Factank report, Catholics are much more likely than other Americans to be immigrants or born to immigrants.

The portion of Catholics who are Hispanics has steadily grown. Around 42 percent of Catholics are either foreign-born or were born to at least one foreign parent. According to Pew, this immigrant growth can be explained because Catholicism “is more heavily made up of Hispanics.”

“Communication with parents has changed, especially because I speak Spanish and I am able to relate to their lifestyle,” said Esmeralda de la Rosa, 20, youth minister at St. Vincent de Paul. A majority of the parishioners at this parish are Hispanic and are excited about the Pope’s visit.

“To know he is Hispanic is the coolest thing ever. Especially for my family, we are able to relate. We should be proud. It’s exhilarating,” said de la Rosa.

St. Vincent de Paul in west Phoenix has five Masses every Sunday delivered by a Hispanic priest. Sometimes, as many as four of these Masses are delivered in Spanish.

“The Diocese of Phoenix is very vibrant. It’s dynamic, it’s a beautiful opportunity to be a Catholic here. We are one body,” said Albert Miranda, a parishioner. He’s a devout Catholic who attends Mass daily at multiple churches.

Inform our reporting: Should the pope meet with Congress?

Papal visits to the United States

He and others at noon mass on a weekday at St. Mary’s Basilica are eagerly awaiting the Pope’s visit.

“Just his presence, he is a world figure. It adds a spark, it rejuvenates Catholics,” said Tom Mooney, also a parishioner.

Pope Francis is not only a Latin American but also the child of immigrants, and he’s expected to highlight immigration issues when he appears before Congress.

“There is a great expectation in the Hispanic community that he will address this topic. By him doing this, as the Pope, there is a hope that those in power will do something about it,” Pereyra said.

De la Rosa is organizing a trip to Philadelphia for a group of 15 church members. They plan to attend different Masses throughout their trip but are most excited about seeing Pope Francis at the Festival of Families.

“He will be speaking a lot on loving your neighbor, how to create peace and how to be able to see people through Christ-like eyes instead of the eyes of immigration and ethnicity and discrimination,” de la Rosa said.

The Arizona, New Mexico and California dioceses have been leaders in Hispanic outreach. Now that the Hispanic Catholic population is expanding beyond the Southwest, more churches may follow their example.

“The face of the church is changing, and it’s looking a lot more like mine! We offer a good model at how to do outreach, we have definitely walked the walk for a long time,” Pereyra said.