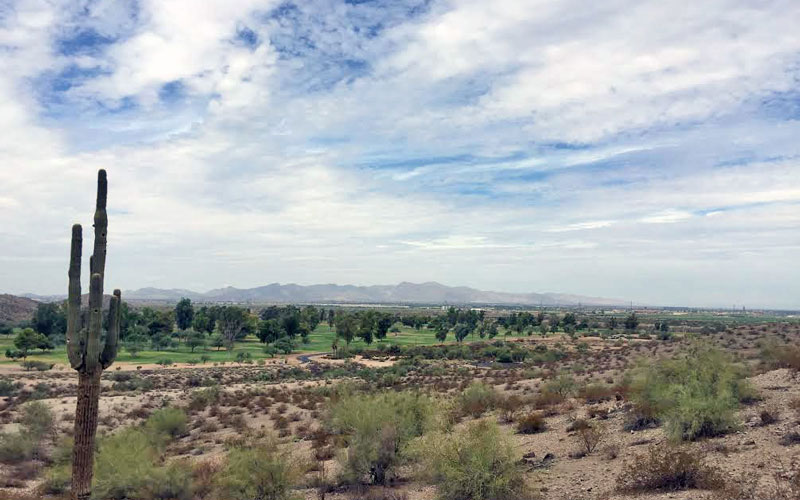 McDowell Mountain Cycles, a Fountain Hills bike shop, is one of the main beneficiaries of the regional park, which is the company’s namesake.

Manager Marty Coplea has had an annual pass to the park for 15 years. Coplea, who founded the Fountain Hills Cycling Club, represents the interests of many avid cyclists who treasure McDowell Mountain’s bike-friendly trails – and the fact the county owns the land.

“It keeps the developers from coming in and taking it over and losing access to the trails,” Coplea said. “It’s huge. It’s one of the reasons people tend to live out here, as well as come visit.”

With more than 120,000 acres of park land, Maricopa County has one of the largest open space park systems in the country. The county commissioned a study of these parks to estimate the economic impact of visitors.

Deepak Chhabra, an associate professor at Arizona State University’s College of Public Service and Community Solutions, led the project. The county and the Arizona Conservation Alliance jointly funded the $10,000 study.

Visitors spent about $13.72 million within 10 miles of the county’s eight open-space parks in 2014, according to the study.

“(Visitors) are looking for an outdoor experience,” Chhabra said. “Not just quality of life is enhanced for visitors and locals. … The quality of the experience is good for families.”

Gas and transportation and food and dining accounted for two-thirds of visitor spending, or $9.4 million. And visitors spent about $1.2 million on shopping.

The study did not factor in entrance fees, licenses and permits that go directly to the county into the economic impact data.

Locals make up the majority of the visitors, with most living within a 10-mile radius of each park.

However, nearly 15 percent of visitors came from outside of Maricopa County. This group accounted for $7.2 million of visitor expenses at hotels, retail stores and equipment-rental companies.

Lake Pleasant generated the highest economic benefit in terms of full-time jobs, labor income and gross regional product. Estrella Mountain made the lowest contribution of the surveyed parks, according to the study.

For every dollar the county spent toward operating costs, the parks generated 42 cents in economic benefit in the form of local wages or salaries, according to Chhabra.

However, the study was limited in scope because of funding, said Stacie Buete, coordinator at the Conservation Alliance and the Desert Botanical Garden.

Buete said they would have liked to chart visitor spending by economic sector and socioeconomic background, data they plan to gather in the future.

But Buete and Cardin could gauge from the study just how much residents utilize and enjoy their parks: Maricopa County residents surveyed had a 95 percent satisfaction rate.

Diaz said she hopes the county will spend additional money to make the descent from the trails safer and less steep.

“If there’s a regional draw, there can be a good economic impact,” Harris said. “If they’re coming from further away, they’re buying gas, food and supplies for their hike – even more so if they’re camping.”