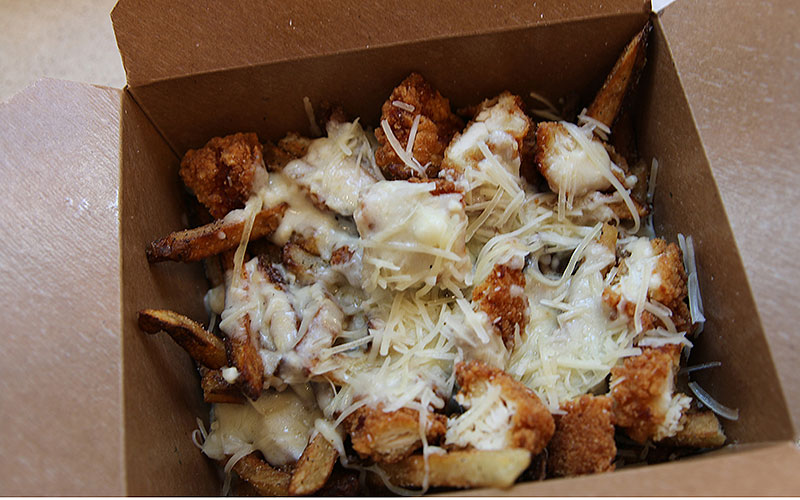 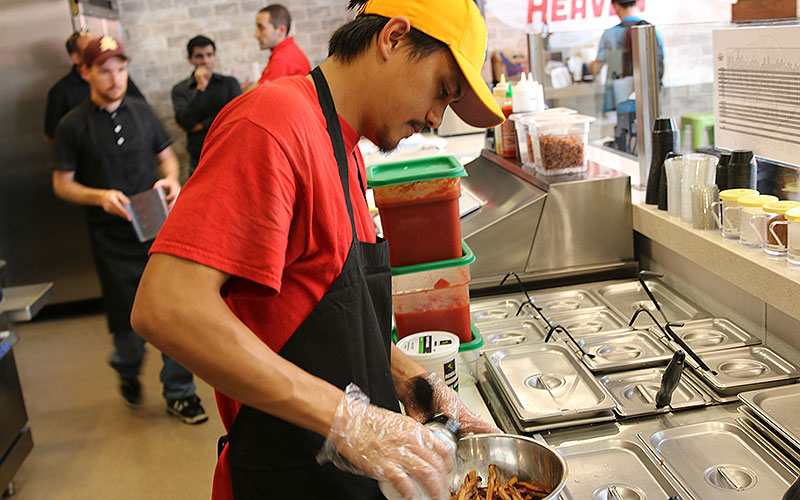 The restaurant’s originality and the variety of dishes kept the business communications major coming back. Patrons can order garlic Parmesan chicken, pulled pork and more served on beds of crispy fries.

“Most of the times I come here, I try to get something that I haven’t had before,” Haskin said while munching on what could be confused as a traditional breakfast platter. “Obviously, I’m eating an egg with French fries today and bacon. It’s kind of creative.”

Haskin’s dish, the sunrise, is part of a new direction for French Fry Heaven. The franchise chain’s Tempe location is its first to embrace the fast-casual market segment from the get-go. Part of that move entails offering more substantial meal-like menu items like shepherd’s pie and taco fries in addition to chili cheese and cheeseburger fries.

Locations: Seven, with about 30 in development

The initial inspiration for French Fry Heaven first came from street corner fry stands that founder and CEOfg (‘fg’ stands for fry guru) Scott Nelowet and his wife Jennifer observed while on a trip to Europe.

When Nelowet opened the first French Fry Heaven store in Jacksonville, Florida, in 2011, it was as a snack-food concept.

“What I found was, there was a couple big issues with snack concepts,” said Nelowet, who visited the Tempe location last week. “No. 1 is, you’re almost forced to go into a shopping mall sort of place, which is the most expensive real estate in the country.”

After bringing on an executive board and making new hires, Nelowet made the leap from snack concept to fast-casual concept (think Chipotle Mexican Grill, Panera Bread and Five Guys Burgers and Fries).

Fast casual as a segment is doing well. The fast-casual industry’s restaurant sales totaled $34.5 billion in 2013, according to market research firm Technomic. Data from market research firm Mintel showed that American fast-casual outlets’ combined sales increased 10.5 percent in 2014, while fast-food chains’ restaurant sales only rose 6.1 percent, according to an article in The Economist.

“It was the right call,” he said. “But we did it quick … all kinds of chains have done the exact same thing. We just did it really early.”

The franchise owners had to change some things to incorporate the fast-casual concept.

“This is the first store that’s with a new prototype essentially, where we’ve gone fresh on everything,” said Asmeet Kapoor, owner of the Tempe location.

“We use fresh-cut fries, we do fresh cut every day,” Nelowet said. “We fresh cut all the vegetables, we sauté all the meats. Everything we do, we do in-house.”

The shift to fast casual has brought the chain challenges.

While Nelowet specified that the chain currently has seven locations with about 30 in development, a 2013 New York Times article reported that Nelowet added 57 new franchisees that year. However, he clarified in an email that the company only opened 17 stores in four years.

“We allowed franchisees to close their mall stores, which we had recommended against originally and did something almost no franchiser has ever done, which is to completely wipe out their debt to us,” said Nelowet in an email when asked about the discrepancy.

“The new model has multiples in revenue potential, but requires increased startup capital, which is not for everybody,” he continued. “Wiping out their debt to us was the right thing to do, even though it cost us a fortune.”

Nelowet also said that a few of the chain’s existing French Fry Heaven stores were too small to fully update to the new concept.

“We went back to the past stores, and we advanced them as close forward as we could, but we’re really limited in what we can do with those,” he said.

The Tempe location, 681 E. Apache Blvd., doesn’t have much space to work with either.

“The location that we got is really small. It’s only 869 square feet,” Kapoor said. “So the challenge is figuring out how to make it work in that small space.”

This store holds personal meaning for Nelowet, an ASU graduate who enthusiastically described his college experience as a good time between attending great classes and making lifelong friends.

“That’s why I was so excited about doing this, is that this was a big deal,” he said. “I mean, this is my alma mater, this is the brand new design, prototype, the whole thing that we’ve been working on.”