About 650 volunteers participated in the search for people as Colorado City digs itself out from damage caused by a flash flood. (Photo by Becca Smouse/Cronkite News) 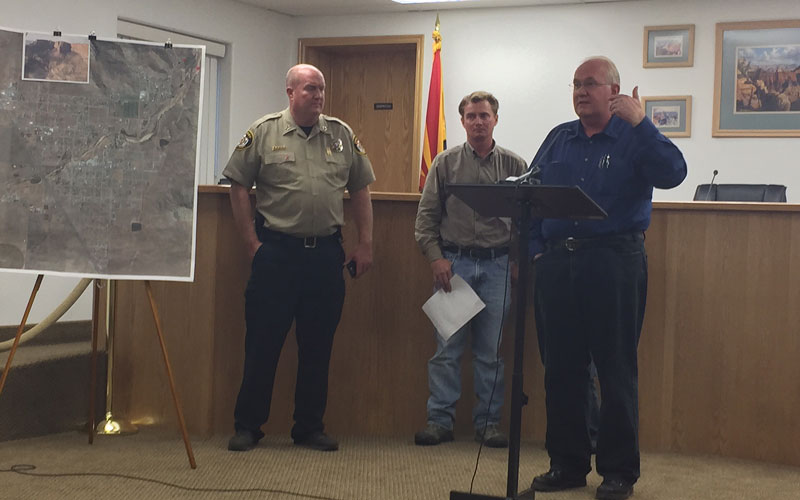 On Monday, storms dumped 2.5 inches of rain in the nearby hills during a brief period, causing intense flash flooding in a wash and sweeping two cars into the flow. In them were members of two related families, officials said.

“Now, in an instant, our families are gone,” Joseph Jessop, who said he represented the families, told reporters an afternoon news conference.

Names of the dead hadn’t been released.

Lying along the Arizona-Utah line, this remote enclave is best known as home to polygamists who are part of the Fundamentalist Church of Jesus Christ of Latter-day Saints, a sect that splintered from the Mormon Church. News coverage of the insular community often features its female residents wearing long-sleeved, pastel prairie dresses reminiscent of those worn by 19th century Mormons, their hair in long braids.

The water surged down a wash that city leaders had identified as having flood problems, Colorado City Mayor Joseph Allred said.

“We’re very well aware of that issue there,” he said. “The fire department has been anxious about that area for years.”

Allread said city officials have lacked funding to address the wash, including building a means of channeling floodwater under roads, some of which was potholed and strewn with mud and debris Tuesday.

Cory C. Pulsipher, sheriff of Utah’s Washington County, said 650 volunteers were participating in the search but that continuing rain was hampering that effort.

“We’re not going to give up until we absolutely have to,” he said.