Anthony Blakes of the Harlem Globetrotters talks with kids from local schools about what the Globetrotters call “The ABCs of Bullying Prevention.” (Photo by Kris Vossmer/Cronkite News) 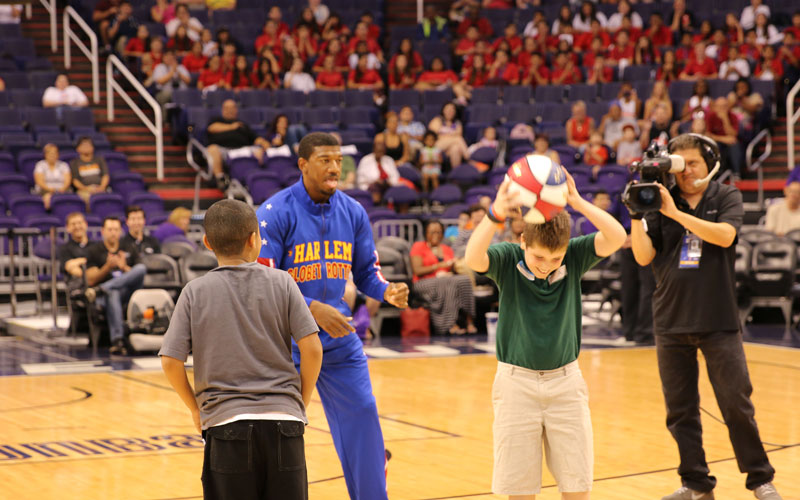 The trick show that Harlem Globetrotters’ Anthony Blakes put on brought smiles and loud applause from the young crowd as they looked on in awe. (Photo by Kris Vossmer/Cronkite News)

Her solution was to wear two shirts. But that wasn’t enough.

“Then they started making fun of me about two shirts, so it was rough,” Bass said.

Coming off a win against the Washington Mystics on Wednesday, the 6-foot-3, 31-year-old Bass could laugh off the memory. But back then she remembered middle school being the worst time of her life because of bullying.

On Wednesday, thousands of Phoenix-area students called US Airways Center their classroom as the Mercury hosted the team’s first “School Day” game, in part to raise awareness of bullying and how to prevent it.

The Mercury provided teachers with digital workbooks that will bring an educational element to the game of basketball by instructing students on STEM subjects – science, technology, engineering and math – as well as bullying prevention.

Kim Freudenthal, an English teacher at Finley Farms Elementary School in Gilbert, said bullying centers on a person’s continuous intent to make another person feel worse, powerless or less important than the bully.

“Not just on the outside but inside,” said Freudenthal, who attended the game, “when it hurts their self esteem and they don’t want to come to school because they don’t feel safe.”

Anthony Blakes, a member of the Harlem Globetrotters, held class during halftime of the game to teach Phoenix-area students about “The ABCs of Bullying Prevention.”

The Globetrotters help combat bullying through their “ABCs of Bullying Prevention” program, which focuses on making 6- to 12-year-olds aware of the three words represented by the “ABC” acronym: action, bravery and compassion.

Blakes asked children how they would approach certain aspects of bullying. He then gave his own tips.

“The biggest thing is compassion,” Blakes said, “feeling for those who are being bullied, not jumping in and being a part of bullying.”

Blakes said students that witness bullying should alert teachers or an adult, who will then handle the situation.

Freudenthal said teachers can combat bullying by pulling a student aside and finding out why they acted out. From there it depends on whether a student continues bullying before disciplining him or her.

The best way to avoid bullying sometimes is just to walk away, Blakes said. But it’s a several-step process. Students need to act if the bullying persists.

Bass said she believes confidence will trump the negativity that others bring.

“If a person can continually walk in confidence, then that deters another person from bullying, and then they naturally want to become your friend for that because you’re strong,” she said.

In that event, it comes upon the person being bullied to react in a manner greater than the bully.

“Give kindness, even though it’s hard,” Bass said.