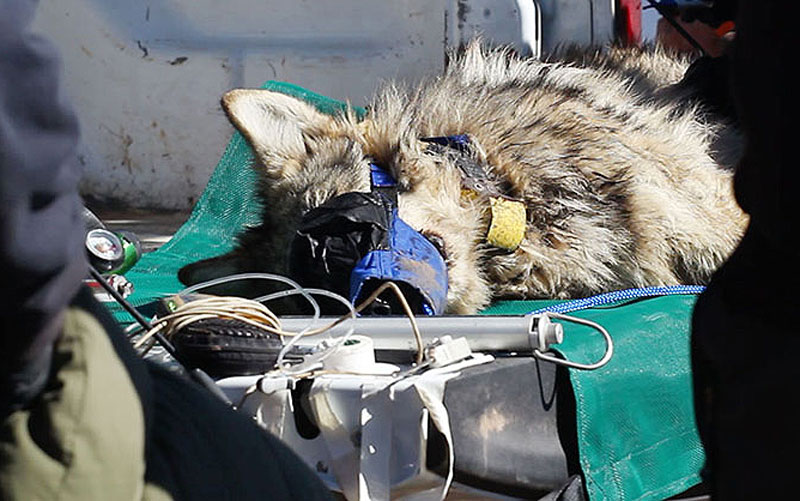 A Mexican gray wolf is tagged in preparation for release back into the wild in New Mexico. (Photo by Laura Sposato/Cronkite News)

NOTE: A previous version of this story erroneously referred to a different lawsuit filed by environmental groups and misspelled the last name of Mike Rabe of the Arizona Game and Fish Department.

PHOENIX – The state has filed a motion to involve itself in a lawsuit in which environmental groups allege that federal officials are failing to abide by the Endangered Species Act and environmental and administrative laws in a rule change to the recovery plan for Mexican gray wolves.

The motion, filed in a case brought by WildEarth Guardians,  New Mexico Wilderness Alliance and Friends of Animals, declares Arizona as a party with an interest in the case.

Submitted by Attorney General Mark Brnovich, the motion says Arizona has the right to defend a revised U.S. Fish and Wildlife Service rules cited in the lawsuit because its interest “is so situated that, without intervention, the disposition of the action may impair or impede its ability to protect that interest.”

The Mexican gray wolf once was common across the Southwest but was hunted to extinction in Arizona by ranchers protecting their herds. In 1998, the U.S. Fish and Wildlife Service and state officials began reintroducing wolves to eastern Arizona, sparking protests in the years since from ranchers fearing predation and from environmentalists who say officials aren’t doing enough.

At last count, the reintroduced population had reached 110.

The groups sued in July over revisions to regulations for the Mexican gray wolf population, which is considered nonessential and experimental. The suit alleges that the U.S. Fish and Wildlife Service has failed to determine whether the reintroduced wolves are essential to the existence of the species in the wild, hasn’t relied on the best available science and information and through the revised regulations has failed to provide for the conservation of the wolf in terms of population allowed, geographic restrictions and circumstances under which killing wolves is allowed.

The lawsuit also contends that federal officials have failed to abide by environmental and administrative laws in developing the revised regulations.

Sandy Bahr, director of the Sierra Club’s Grand Canyon Chapter, said she isn’t surprised that Arizona is intervening in the case.

“It looks like they are trying in every way to hinder wolf recovery,” she said.

Mike Rabe, who oversees the state’s role in the wolf recovery program for the Arizona Game and Fish Department, said his agency is doing its best to work with various groups that have concerns about the recovery effort.

“We are trying to thread the needle between stakeholders while doing what is best for this species and ecosystems in Arizona,” he said.