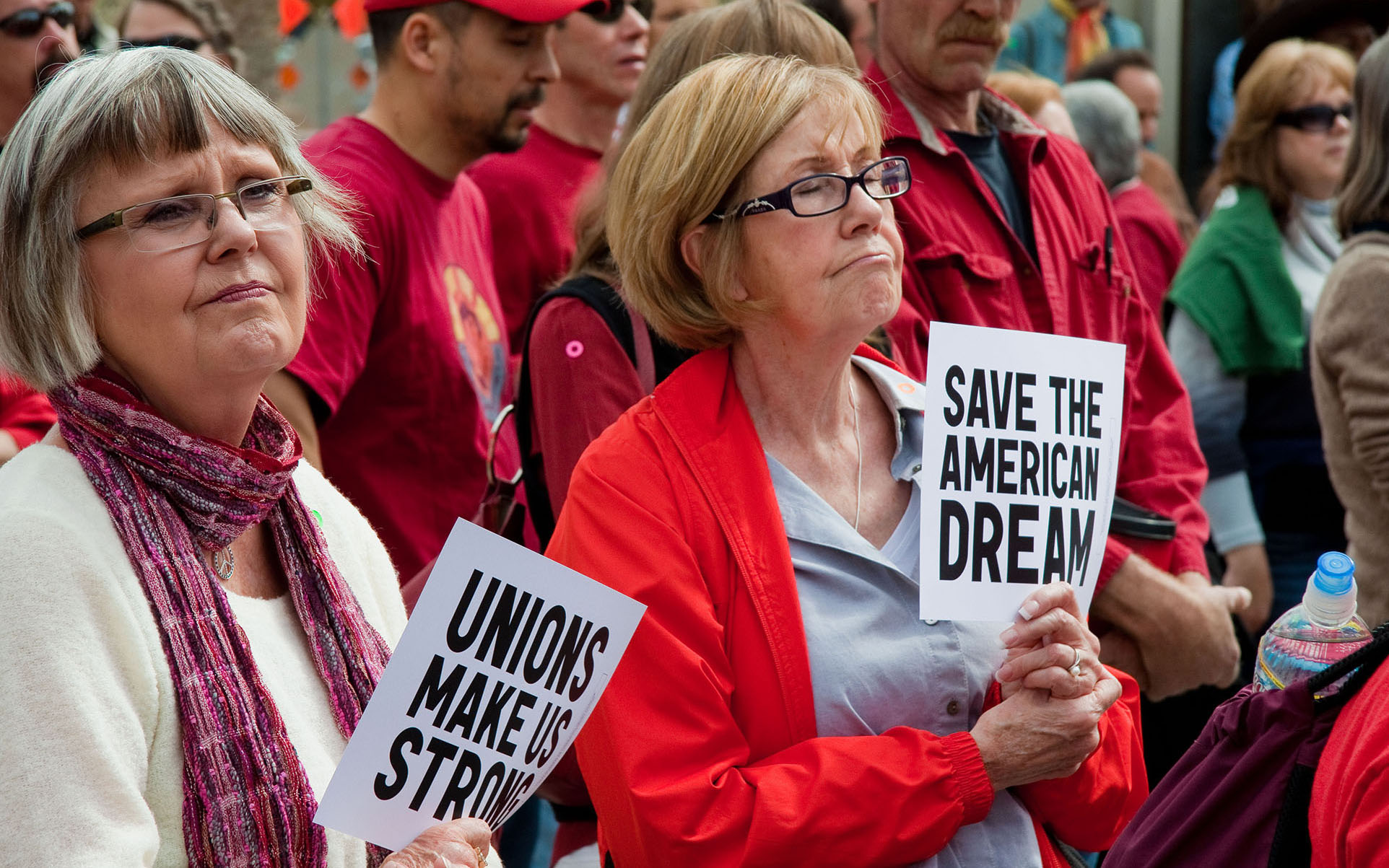 Protesters in Phoenix at a 2011 MoveOn.org rally in support of Wisconsin public employee unions, which have have been under fire in Wisconsin in recent years. Still, that state was slightly above the national rate of 11.1 percent last year, while Arizona was well below. (Photo by Sandior via flickr/Creative Commons)

WASHINGTON – Arizona labor unions have something to celebrate this Labor Day weekend, with union membership in the state rising last year for the first time since the start of the recession.

Unionized workers rose from 5 percent of the state’s labor force in 2013 to 5.3 percent in 2014, an increase of 16,000 workers over the year to a total of 138,000 union members, according to numbers from the Bureau of Labor Statistics.

But Arizona, a right-to-work state, still trailed 36 states and the District of Columbia for union membership rates, despite the increases it posted in 2014.

“But Arizona is just not going to be one of the leading states for union membership,” McPheters said.

That title goes to New York, which was tops in the nation in 2014 with nearly a quarter of its workforce being union members. It was followed by Alaska, Hawaii, Washington, New Jersey and California.

None of the top states have right-to-work laws, like Arizona, which give workers the option of joining a union in their workplace.

“In a right-to-work state, the presumption has always been that unions won’t grow,” said Suzanne Cummins, a senior lecturer at the University of Arizona’s Eller College of Management.

The percentage of unionized workers in Arizona has historically been below the national rate. It had climbed to 8.8 percent in 2007 and 2008 before the recession hit, when both union jobs and overall jobs declined. BLS said Arizona lost 312,600 jobs in the depths of the recession.

But not all unions said they saw declines in memberships in that time.

“We’ve been growing since 2008,” said Brock Henderson, a national representative for the American Federation for Government Employees. “We have upwards of 10,000 members in Arizona.”

Arizona had recouped 198,000 of those lost jobs by 2014, according to McPheters, who said that growth likely explained the increase of unionized workers in the state. But he does not expect to see union membership get much higher, noting that much of the job growth has been in fields that are not typically identified with unions.

“Some of the strongest growth is in finance, in insurance, in data centers,” McPheters said. “These types of jobs are not very highly unionized.”

The highest unionization rates nationwide were among workers in protective services jobs and in library, education and training positions, which stood at 35.3 percent each, according to BLS.

More than 35 percent of the nation’s public-sector workers were union members in 2014, according to the bureau, while just below 7 percent of the private-sector workforce was unionized that year. The overall rate nationally was 11.1 percent in 2014, down 0.2 percentage points from 2013.

“Arizona has been in and out of the bottom 10 states in terms of union memberships,” McPheters said. He does not expect that will changing any time soon.

“Given the structure … the history of the Arizona economy, this is typically going to be a state that is in the bottom half of all states in percentage of unionization,” he said.