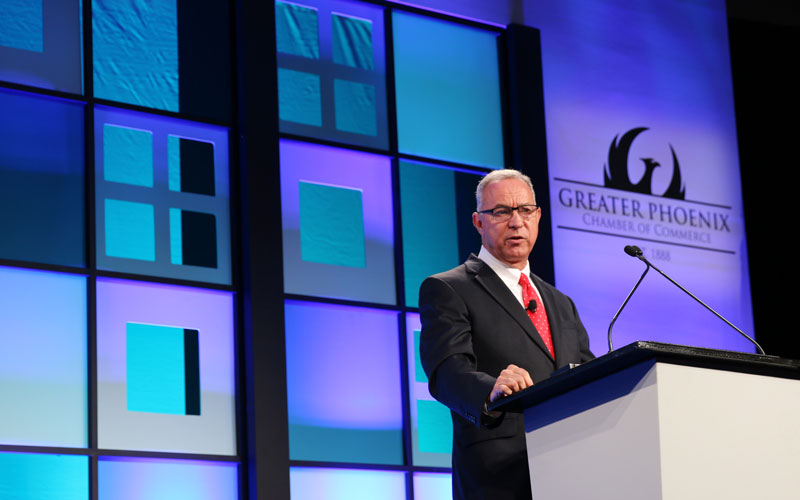 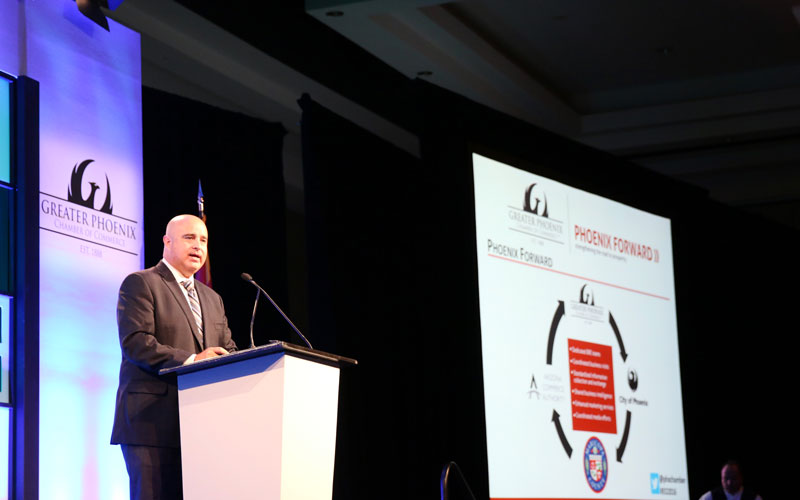 Todd Saunders, president and CEO of Greater Phoenix Chamber of Commerce, speaks at the podium for his company’s Economic Outlook 2016 conference in Phoenix. (Photo By Cammeron Neely/Cronkite News) 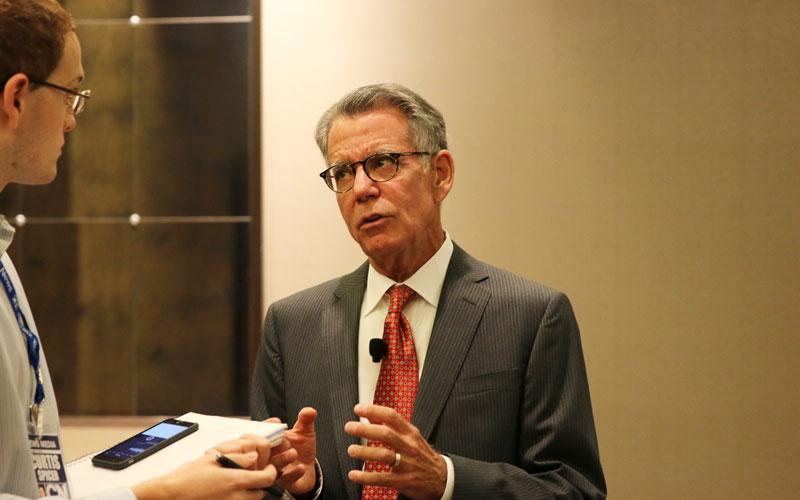 The economists, who spoke at a Greater Phoenix Chamber of Commerce event on Wednesday, said they expect millennials to fill some of the void created by the Great Recession. It’s just happening much more slowly than the boom-and-bust cycles older generations experienced, Scottsdale-based economist Elliott Pollack said.

“The millennials are delaying adulthood basically,” Pollack said. “So things like buying houses and getting married are getting pushed off. I think it’s by choice, because they can. It’ll all happen for them except they’ll be in their early 30s instead of their early 20s. It’s not a condemnation of it, it is what it is.”

A crowd of more than 800 people gathered at the Arizona Biltmore to hear about the local and national financial climate and projections about what might happen in 2016. Three experts discussed purchasing houses, attracting new families and making Arizona more appealing to business. Creating a place that’s livable for younger generations was a recurring theme.

Pollack, CEO of Elliott D. Pollack and Co., said student loan debt hinders millenials from buying homes because those loans are essentially like paying a mortgage. Plus, the desire to live in a lively downtown apartment instead of a quiet single-family home in the suburbs remains popular.

“That will change only when they get married and have kids,” Pollack said. “It’s too expensive in the central city, and it’s tough to raise your kids there.”

“Millennials have, in some ways, a more healthy point of view about life,” Pollack said. “They’re doing what perhaps their parents would have liked to have done, but couldn’t.”

Pollack said the prosperity of the housing market indicates the health of consumer spending as a whole, and people who cannot afford houses likely won’t spend money on things to fill those houses either.

The psychological effect of the recession was not lost on younger generations either, said Jim Huntzinger, chief investment officer of Oklahoma-based BOK Financial. From watching a parent lose a job to experiencing a foreclosure, these factors make recent high school or college graduates anxious when it comes to buying a home.

“They’ve been reluctant to step into that market because of what happened to their parents,” Huntzinger said. “But if you have a college degree, you’re finding work at reasonable levels of salary. It’s just takes time then for that to be translated into housing.”

“Phoenix is in the same boat as everyone else in terms of big trends,” Huntzinger said. “Housing has been a major missing piston in terms of economic recovery. It’s been slower than it has almost ever been coming out of any major recession.”

The national unemployment rate has fallen to 5.3 percent, making significant progress since that rate peaked at more than 10 percent during the 2008 recession.

The metro Phoenix area has a 5.7 percent unemployment rate now, and that signals a slow return to normalcy, Pollack said. However, he said there is still significant progress to be made and hurdles to overcome.

“Locally, you’ll see about 3 percent employment growth, and the unemployment rate is going to come down,” Pollack said. “Arizona is about 13th in terms of employment, but the reason it doesn’t feel that good is because normally, we are second or third (lowest).”

Since so much of Arizona’s economy depends on the housing market, attracting people to come and live in the state is critical. Domestically, Arizona places third in terms of where people relocate, Pollack said. Only Florida and Texas rank higher.

However, during the year controversial immigration measure SB 1070 passed, Arizona fell from eighth to 18th on the list of states most popular among people moving from other countries, Pollack said. He blames the stigma that came with the law. 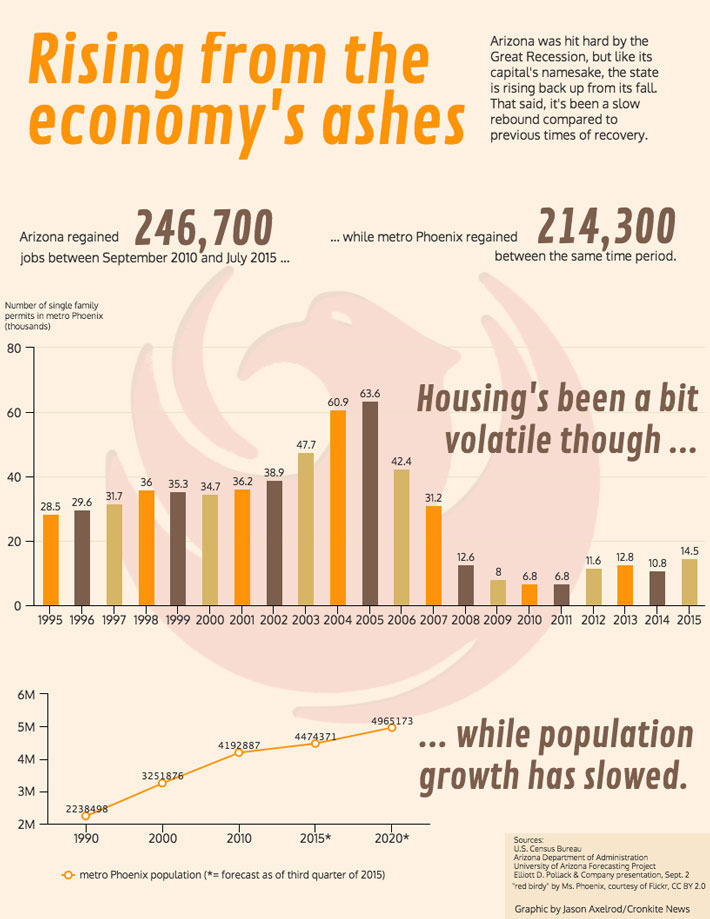