A man walks by an ad for a currency exchange in Hong Kong. China’s recent devaluation of its currency is expected to make it harder for U.S. firms to export to China, by making Chinese goods cheaper and U.S. products relatively more expensive. (Photo by Tyrone Siu/Reuters) 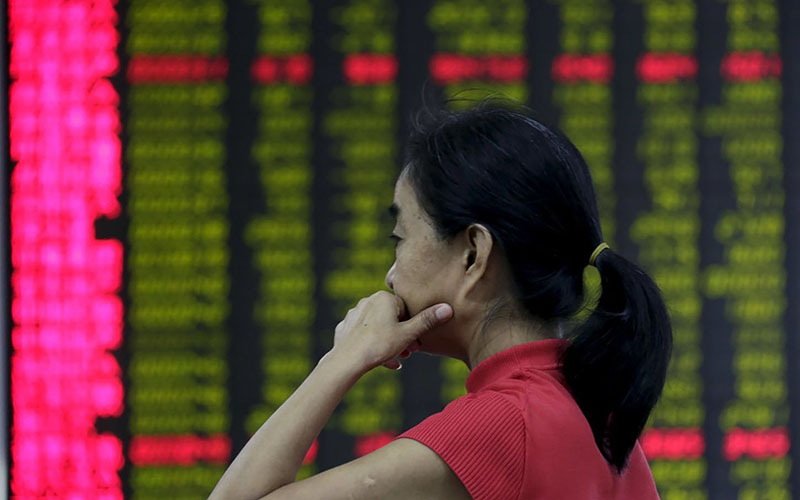 An investor looks at an electronic board showing stock information Wednesday at a brokerage in Beijing. Chinese markets have been falling in recent months, triggering market volatility in the U.S. and elsewhere around the globe. (Photo by Jason Lee/Reuters)

WASHINGTON – What happens in China, doesn’t necessarily stay in China.

For Arizona, which exported more than $1 billion to China in 2014, the economic turmoil currently being experienced by one of the state’s biggest trading partners could cause ripples that are felt back home.

But economists and business leaders said that although the slowing Chinese economy could be cause for concern, there is still a lot of potential for American companies for now.

“Everyone is paying close attention” to China, said Erin Ennis, the senior vice president of the U.S.-China Business Council. But none of the more than 200 companies that work with the council have changed course yet, she said, instead waiting in a “holding pattern” to see which direction the Chinese economy goes.

So far this year, China’s economy has gone in the wrong direction.

The People’s Bank of China has cut interest rates five times in the last nine months, most recently on Tuesday. China’s main stock index, the Shanghai Composite, began to slide over the summer and the People’s Bank devalued the currency, the yuan, earlier this month.

The turmoil in the Chinese economy triggered the recent volatility of U.S. stock markets, said Dennis Hoffman, an economics professor at Arizona State University’s W.P. Carey School of Business, in an interview earlier this week.

And while the devalued yuan makes it cheaper for Americans to buy Chinese goods, it makes it more expensive for China to buy goods from the U.S., said experts.

Kristian Richardson, the director of the Commerce Department’s U.S. Commercial Service in Arizona, said a stronger dollar is “doing nothing to help” U.S. firms seeking to export to China.

But Ennis said that China could still be a robust market for American companies. The International Monetary Fund said in July that the Chinese economy is expected to grow 6.8 percent in 2015 – significantly higher than the 2.5 percent growth forecast for the United States.

A report by Ennis’ council – which includes Honeywell and Intel, among other firms with operations in Arizona – lists China as the third-largest export destination for the state, behind Mexico and Canada. The Census Bureau put China in fourth place for Arizona exports, trailing the United Kingdom by $82 million last year.

China bought about 5 percent of all exports from Arizona in 2014, led by computers and electronics sales at $489 million and transportation equipment exports at $150 million, according to the report by the U.S.-China Business Council.

Richardson said that if things continue to go poorly in China, it could drag down the economies of the rest of Asia, which would be bad for Arizona companies looking to take advantage of trade relations with other countries in the Pacific region.

In the meantime, firms are taking a wait-and-see attitude.

“All this creates a really uncertain market for companies doing business in China,” Ennis said.