Sediment spilled from a mine colors the Animas River in Durango, Colorado, on Aug. 6. (Photo by La Plata County Emergency Management)

Sediment spilled from a mine coats a rock along the Animas River in Durango, Colorado, on Aug. 6. (Photo by La Plata County Emergency Management) 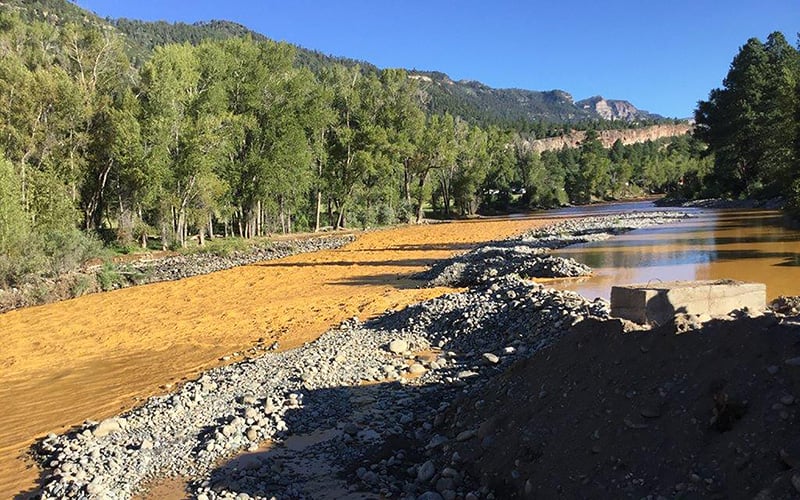 Sediment spilled from a mine colors the Animas River in Durango, Colorado, on Aug. 6. (Photo by La Plata County Emergency Management)

The groups, led by the Grand Canyon Trust, pointed to dangers from so-called zombie mines, those that reopen after not operating for long periods. The petition said regulations governing mining, particularly for uranium, fail to prevent water pollution, soil contamination, harm to sensitive species and more.

“Five million people visit the Grand Canyon every year. What if the water had arsenic or uranium in it?” said Kevin Dahl, Arizona program manager for the National Parks Conservation Association. “Every visitor would have to bring in his own water. We would have to close up the park. Can you imagine closing one of our national landmarks due to toxic waste?”

The petition, addressed to the directors of the Department of the Interior, Department of Agriculture, U.S. Bureau of Land Management and U.S. Forest Service, seeks regulatory changes to:

• limit approved plans for mining to 20 years, with the option to renew for 20 years;

• require regular inspections by the BLM and Forest Service;

• require supplemental environmental reviews and new approvals to resume mining at sites that have been out of operation for at least 10 years.

• and add deadlines for launching and completing reclamation at inactive or closed mines.

“These are companies that make large amounts of money off of what is essentially a public resource,” she said. “These are lands owned by the American people, so any costs related to these new and important regulations will go to the companies making the profit.”

Three million gallons of wastewater containing zinc, copper, iron and other heavy metals spilled Aug. 5 into the Animas River from the Gold King Mine near Durango, Colorado. The Environmental Protection Agency was inspecting the mine at the time.

The Animas flows into a river that drains into the Colorado River at Lake Powell.

Emily Beyer, a spokeswoman for the Interior Department, which includes the BLM, said in an email that the agency is aware of the petition. While not commenting on it, she directed a reporter to a news release announcing that the Bureau of Reclamation will lead the department’s investigation of the Gold King Mine spill.

A spokeswoman for the U.S. Forest Service, which is part of the Agriculture Department, didn’t respond to an email and phone call seeking comment.

The petition includes letters from the Coconino County Board of Supervisors as well as the Board of Commissioners in Colorado’s San Miguel County. The Havasupai and Hualapai tribes, whose reservations include parts of the Grand Canyon, offered letters supporting the petition.

Sandy Bahr, director of the Sierra Club’s Grand Canyon Chapter, said testing technology has improved to the point that uranium mining sites deemed safe decades ago could be dangerously radioactive.

“That’s why we call them zombie mines,” she said. “You think they’re gone because they haven’t seen any activity in 20 years, then they come back more dangerous than ever.”