Traders on the floor of the New York Stock Exchange on Tuesday, when stocks rebounded from a historic drop before falling again sharply at the end of the day. (Photo by Brendan McDermid/Reuters) 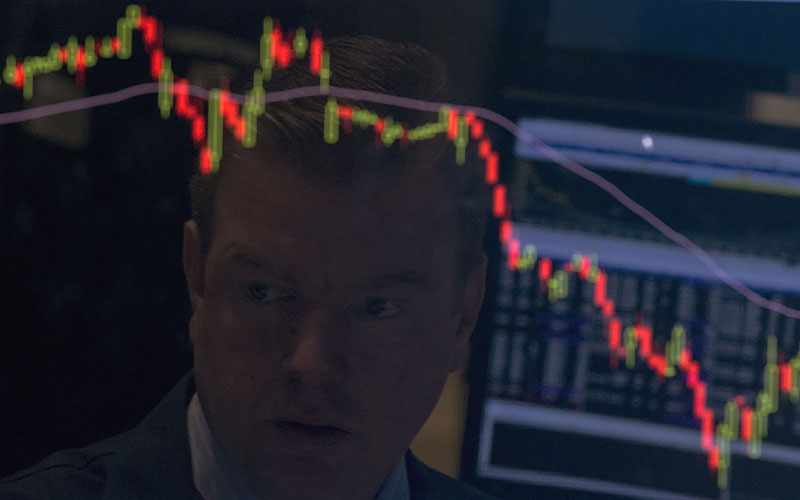 A specialist trader is reflected in a New York Stock Exchange screen during Tuesday’s hectic trading. Experts are urging investors to look at the long term.(Photo by Brendan McDermid/Reuters)

WASHINGTON – The stock market has been buffeted by historic drops over the last week, but economists and financial advisers in Arizona were telling investors Tuesday that it’s still “too early to be concerned.”

They said volatility is normal in the markets and pension funds and other investments are designed for the long term. While sustained declines could be a problem, they said, investors who get spooked now and pull their money out of the market are probably making a mistake.

“The stock market is volatile – it’s not a steady rise,” said Michael Bond, a senior lecturer in finance at the University of Arizona, adding that this week’s swings in the market pale in comparison to those of the 1920s and other times.

After losing more than 9 percent over the past week of trading, the Dow Jones industrial average rallied Tuesday, only to fall precipitously in the last hour of trading. The highs and lows:

After weeks of falling stocks in China, the Dow Jones industrial average began to tumble last week, going from 17,509 at last Wednesday’s open to 15,882 when the markets opened Tuesday, a 9.3 percent drop. The Dow Jones fell 588 points on Monday alone.

The market rose 441 points Tuesday, before reversing direction in the last hour of trading to close at 15,666, for a net loss of 205 points from Monday’s close.

But a spokesman for Arizona’s Public Safety Personnel Retirement System said there is always volatility somewhere in the world, pointing to the crisis in Greece and the recent concerns over China. And there are ways to decrease exposure to it, he said.

“We plan for long-term investments through a highly diversified portfolio,” said Christian Palmer, the spokesman. He said the system’s clients benefit from a portfolio that is able to “withstand” market volatility.

Dennis Hoffman, a professor of economics at the W.P. Carey School of Business at Arizona State University, said the Arizona State Retirement System has also shielded itself from the tumultuous week in the market. The fund, with more than 550,000 members and a total market value of $35.6 billion, focuses on the long term so members shouldn’t worry, Hoffman said.

Persistently low equity markets would certainly be a drag for the fund, Hoffman said, but it’s “too early to be concerned.”

Not only is it a bad time to get out of the markets, Bond said, but it could be a great opportunity to add to a portfolio. He compared a correction – defined as a drop of at least 10 percent in a given index – to a sale at a shopping mall.

The major stock indices have climbed strongly and steadily since 2009. Hoffman said he does not expect anything like the financial collapse of 2008, but he also wouldn’t rule out a 10 or 20 percent correction now.

Market volatility can have impacts beyond direct investment.

“The major impact of equity price fluctuations on Arizona would be in the attitudes of consumers and in consumer confidence,” Hoffman said, adding that there is a clear correlation between the Standard and Poor’s 500 index and consumer morale.

Thursday to Monday marked the biggest three-day point decline in the Dow’s history, according to CNBC reports, with Tuesday marking the biggest one-day downward reversal since October 2008.

Darin Shebesta, a wealth adviser for Jackson/Roskelley Wealth Advisors Inc. in Scottsdale, said this downturn in the markets will pass. Citing the Cuban Missile Crisis and 9/11, Shebesta said negative moments such as this end up as “blips on the radar,” adding “the market has never gone to zero.”

Shebesta said he sets up a plan with his clients to minimize panic during abnormalities in the market. While many planners are getting calls from clients who want to change their portfolios, Shebesta said the worst thing to do on a rollercoaster is to jump off.