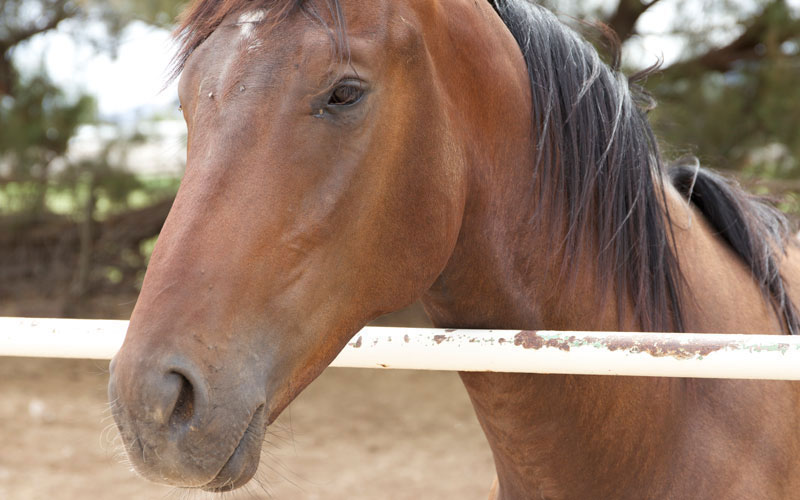 Hercules, a thoroughbred, has his own pen at the University of Arizona’s Equine Center. (Photo by Chris Wimmer/Cronkite News) 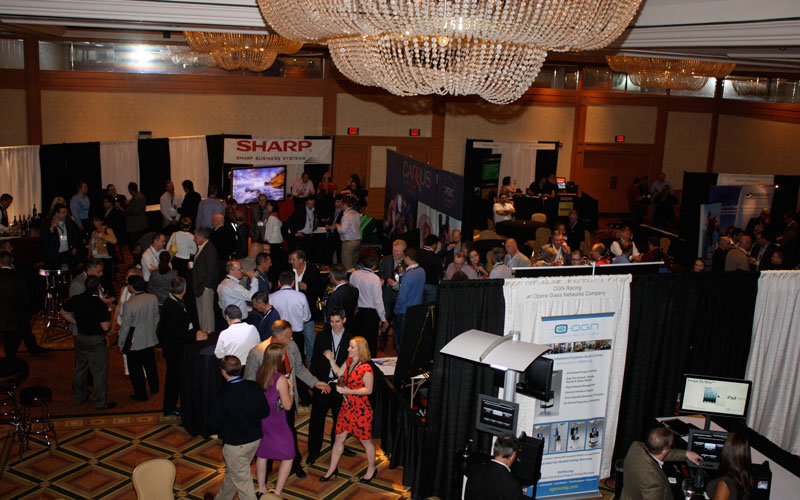 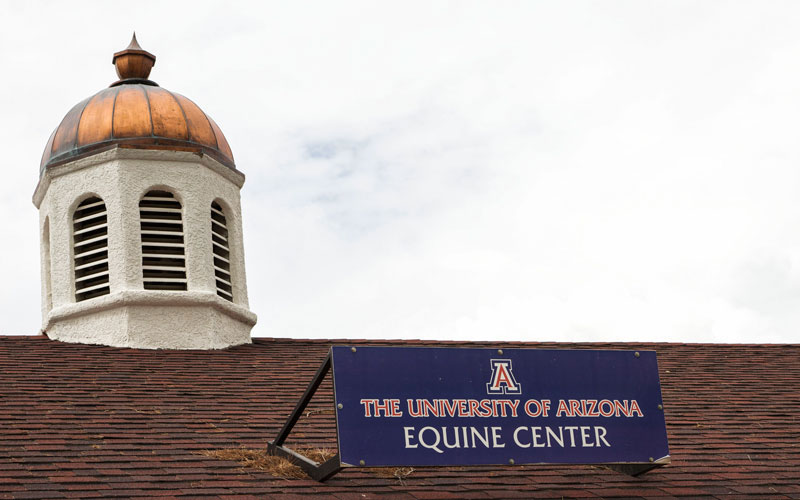 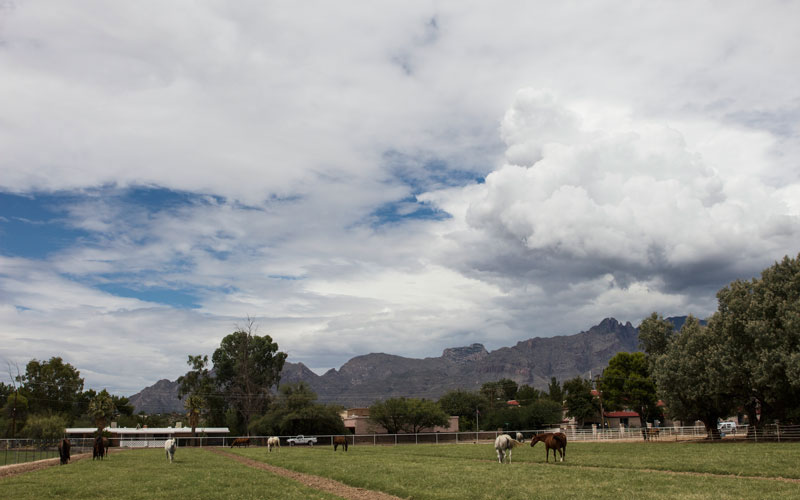 The University of Arizona’s Equine Center includes 16 acres of pasture land for the horses. (Photo by Chris Wimmer/Cronkite News)

Baffert, a native of Nogales, who guided American Pharoah into the history books, is the most recognizable alumnus of the Race Track Industry Program at the University of Arizona. But he is just one of the nearly 700 graduates of a program that is one of a kind.

The program is small — usually less than 30 total students combined between undergraduate and graduate levels — but its alumni permeate every layer of the racing industry, from Del Mar, California, to Lexington, Kentucky, to Saratoga Springs, New York.

They are CEOs, presidents, directors, and racetrack managers. They are farm managers and stewards and breeders. They are thoroughbred trainers like Baffert and Todd Pletcher.

Pletcher has amassed a staggering list of victories and awards. As a trainer, he currently ranks No. 1 in earnings for 2015 and for all-time, according to Equibase Co.

The program, which offers both bachelor’s and master’s degrees, is firmly established and well respected inside the close-knit racing business, yet its faculty joke that most of the University of Arizona students who cruise the palm-tree-lined sidewalks of the campus have no idea it exists.

But the program’s profile was definitely raised after American Pharoah clinched the Triple Crown at Belmont Park in June and Baffert was interviewed by as many media outlets as could wrangle a minute of his time.

Despite the slight rise in celebrity, the RTIP is staying true to its roots. Those roots go back to the early 1970s when a group of horse-racing insiders had a unique idea. The idea was a long shot, but what began as a speculative startup in the Arizona desert has grown into a respected piece of the industry.

“The program is a real jewel in the crown,” said Shane Burgess, the dean of the College of Agriculture and Life Sciences, which houses the RTIP.

Training and experience
It started as an experiment.

Frank Vessels Jr., the son of the founder of Los Alamitos Race Course near Anaheim, California, and a small group of likeminded individuals thought the industry could benefit from a collegiate program to train young men and women who wanted to be in the business. The ideal situation would be to find a land grant institution with year-round racing for horses and greyhounds.

Vessels, who was president of the American Quarter Horse Association at the time, and his group shopped the idea to universities across the country.

Then the University of Arizona agreed to a five-year pilot program and in 1974 the Race Track Industry Program was born. There were 15 students, three classes, no textbooks and a lot of skepticism about the program’s potential for success.

There was also a major stipulation by the university: The racing industry needed to provide most of the funding for the new venture.

Vessels and his partners secured financial commitments from the Los Alamitos Race Course, the American Quarter Horse Association and the American Greyhound Association to start the program. The RTIP was placed in the School of Animal and Comparative Biomedical Sciences within the university’s College of Agriculture and Life Sciences.

For most of its history, the program only offered bachelor’s degrees and students pursued two specialized tracks: bloodstock and business.

The bloodstock track focuses on the horse itself. Students learn about breeding, training, riding and caring for the animal. Coursework is split between studies in a traditional classroom setting and hands-on experience at the Equine Center on a farm located several miles north of campus that is owned and operated by the university.

The centerpiece of the bloodstock path is commonly referred to as the yearling project. Under the guidance of Kacee Adams, an equine sciences instructor and manager of the Equine Center, the students help wean, raise and ultimately sell a horse over the course of a year.

Adams, a graduate of the school of animal sciences herself, can instantly rattle off the names of every one of the 60 horses on the farm and said the sale is an emotional moment for the students.

“I remember when I took the classes, I bawled and I cried,” she said. “It’s an important lesson for the students to learn also that even though they’re animals and we need to take care of them and we need to have compassion for them, it’s also a business.”

This side of the industry is the one pursued by trainers like Baffert and Pletcher, and more recent graduates like Chance Timm, who has been the director of stallion seasons and shares at the prominent Lane’s End Farm in Kentucky for a year and a half.

Timm maximized the opportunities for hands-on experience both inside the program and outside of it.

“I had an awesome experience there because I was really hungry,” Timm said. “I wanted to do a lot, I wanted to see a lot and every time I wanted to do something more, everyone there did everything they could to help me.”

While he was in school, Timm worked the starting gate at Rillito Park, a small local track in Tucson.

RTIP has recently partnered with Rillito Park in the hope of benefiting both the track and the program. Mike Weiss, the general manager of the track, is an alumnus of RTIP and, according to the program’s director, Doug Reed, wants to get the students as involved as possible.

“We’re trying to make that a working lab for the students,” Reed said.

Timm said his “horsemanship improved exponentially” during the time he worked at Rillito. He was also flown to Belmont Park in New York by United Tote, a company that produces electronic betting machines for racetracks, to help train tellers on new software for the machines.

Timm gained even more real-world experience before he graduated when he worked with a bloodstock agent who bought and sold horses at a sale in Pomona, California. He is still close friends with the agent today.

The opportunities that crossed Timm’s path were not unique to his experience in the program. Numerous graduates listed jobs and internships they earned while still in school, while also highlighting the level of training within the program.

The program constantly evolves to keep pace with new technologies and developments in the industry. In 2006, Reed saw an opportunity to elevate the program by offering a master’s degree that focuses on business operations.

“We felt like we were getting that caliber of student anyway and all we could offer all these second-career people was a second bachelor’s,” Reed said. “We thought it would enhance the attractiveness of (the program).”

Erich Zimny, now the vice president of racing operations at Hollywood Casino at Charles Town Races in West Virginia, recognized the unique benefits of the RTIP’s master’s program. He was part of the inaugural class that graduated in 2007.

“They brought the pragmatic experience of working at a racetrack into the classroom incredibly well, and in academia that’s not always easy to find,” Zimny said.

Like many students who enter the RTIP, he made a career change when he moved to Tucson.

Zimny always loved racing and worked at Suffolk Downs in Boston after college. Then he earned a law degree from Rutgers University and practiced law in New York for several years. But he knew his true interest still laid in horse racing.

“I think the whole time I really knew my heart was in this industry,” Zimny said. “This was where I wanted to be, and when I started researching how I could make that happen and how I could get back in it, the program came up as a very viable option and the more I talked to people, the more it was recommended.”

In the future, Reed would like to add an endowed chair to the faculty to work with graduate students. His goal is to bolster the staff with a person holding a Ph.D. to help fully develop the business research side of the graduate program. For the moment, Reed must wait until the money to pay for the position becomes available.

The program’s funding structure reduces its need to rely on state money from the university. To remain mostly self-sufficient, the program relies on revenue generated by the annual Global Symposium on Racing and Gaming that the RTIP hosts every December.

A conference and networking bonanza
The RTIP’s primary source of funding is the annual event that began in 1974, the same year the program launched. Reed estimates 65 to 70 percent of his budget comes from endowments, donations and dollars generated from the conference that regularly draws around 500 attendees.

The symposium serves several purposes. It is a full-fledged conference where hundreds of professionals from all areas of the racing industry meet for four days to hold panel discussions on various topics and set up exhibits to display new products or ideas.

Alex Waldrop, president and CEO of the National Thoroughbred Racing Association, sits on the board of advisers for the Race Track Industry Program and has attended the symposium virtually every year since 1992, when he was hired as general counsel for Churchill Downs.

“When I first joined Churchill Downs, one of the things I was told I must do is go to the racetrack industry symposium in Tucson, Arizona, in early December,” Waldrop said. “They had to twist my arm once to go, but once I was there, I was hooked.

“It brought together tracks, horsemen, breeders, owners, trainers — a wide variety of participants in the game — and gave me a chance to make some of my first friends in the industry,” Waldrop said.

For the students, the symposium is also an incredible opportunity to network with a who’s-who of industry professionals and sit in on real-world discussions about the business.

“We actually cancel classes those two days (during the week) and tell them, ‘You’re better off up there listening to the content than you’re going to be listening to my lecture,'” Reed said.

The focal point of the networking opportunities is the mentor luncheon. Students can review a list of attendees in advance and set up one-on-one meetings over lunch with industry leaders who have agreed to volunteer their time.

Zimny met with the current CEO of Churchill Downs Inc., William C. Carstanjen, when Zimny attended the luncheon as a student.

“You have to make the most of the opportunity yourself,” Zimny said. “If you’ve got the energy and you’ve got the determination to get out there and make those contacts, those people are available for you to speak to and I know many people whose jobs derived from their experiences at the symposium.”

The alumni, the dean of the college and advisers like Waldrop credit the success of the program to a dedicated and passionate faculty that brings decades of racing experience to the classroom. Three members of the faculty are also graduates of the program and they routinely recruit industry professionals as guest lecturers.

“This entire program is really run by a very few people who are visionary, and not just visionary, but they actually deliver in a very structured way,” said Burgess, the dean. “They are the example of the kinds of people that higher education needs to employ.”

Forty years after the group led by Vessels decided the racing industry needed a collegiate program to help train new generations of young men and women, the experiment has been a success.