Brewers from Arizona Wilderness Brewing and THAT Brewery toast a joint creation. They are two of the scores of Arizona’s craft brewers helping drive growth of the beer industry and its economic impact on the state. (Photo by Alan Levine via flickr/Creative Commons) 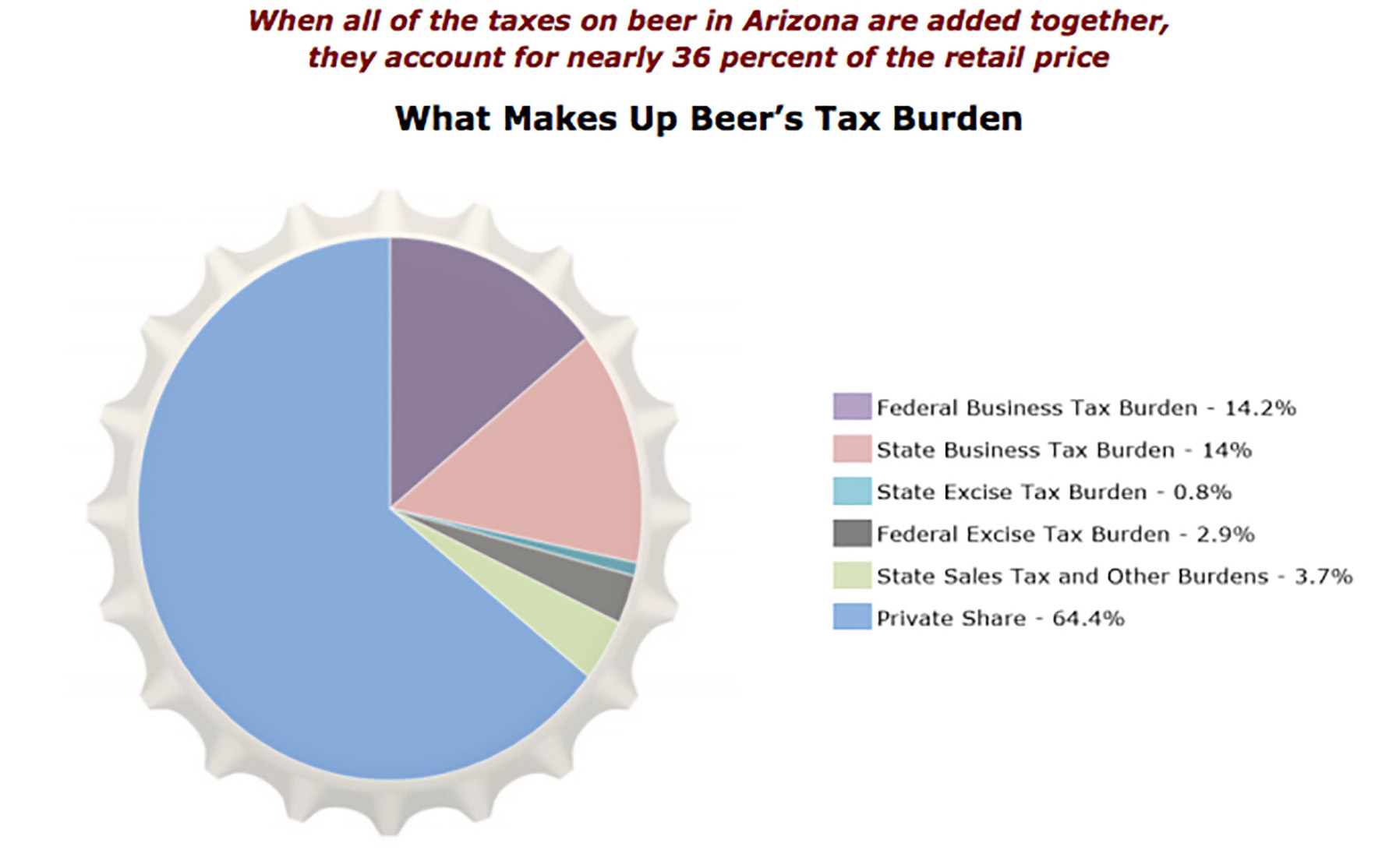 The beer industry in Arizona generated more than $800 million in state and federal taxes in 2014, according to an industry report. It said Arizona’s overall tax level was slightly below the national 40 percent average. (Chart courtesy “Beer Serves America”)

WASHINGTON – When Rob Fullmer, the executive director of the Arizona Craft Brewers Guild, says “everything is improved by the presence of a brewery,” he’s talking about the economic buzz it brings and not the alcoholic kind.

“Anytime you can put a business between two breweries, you’ll see a much more foot traffic in that area, and you’ll see a real benefit to your employees,” said Fullmer – not to mention “the lunches and happy hours.”

New industry-generated numbers appear to back up that claim that beer brings economic growth and prosperity.

A recent report by the National Beer Wholesalers Association said the beer industry in Arizona – from brewers to drivers to bartenders – had an economic output of almost $4.3 billion in 2014, generated more than $800 million in federal and state taxes and was responsible for 38,627 jobs in the state.

“Arizona’s beer industry is doing slightly better than most,” said the association’s chief economist, Lester Jones. “It’s marginally above the national average in terms of its economic output, wages, jobs – which is not a bad place to be at all.”

With a gross state product in Arizona of just over $279 billion in 2013, according to the U.S. Bureau of Economic Analysis, the beer industry accounted for roughly 1.5 percent of the total GSP. Arizona’s beer industry had the 21st highest economic output in the country and was 19th among the states in terms of wages and jobs, according to the report.

Nationally, the beer industry generated 1.75 million jobs in a U.S. labor force close to 149 million, and had an economic impact of nearly $252.58 billion on a gross domestic product of $17.3 trillion.

The study looked at the three traditional tiers of brewing, wholesaling and retailing and accounted for everything from the cost of equipping breweries, to the salaries for truck drivers who deliver it and bartenders who serve it.

The report said that for every retail dollar of beer sold in Arizona, the state and federal governments get nearly 36 cents in taxes. In other words, if a consumer pays $2 for a beer, about 71 cents goes to the government. Arizona was slightly below the national average of a 40 percent tax burden.

Despite the bite by the government, industry officials say the business is booming in Arizona, particularly among local craft breweries and craft beers.

Fullmer said Arizona is a “hot” for brewing, in more ways than one.

“I think Arizona’s numbers are better than what the NBWA is reporting,” Fullmer said. “They underrepresent the craft beer industry which has been particularly strong in the past few years.”

That was echoed by Chip Mulala, who goes by the title minister of craft beer at SanTan Brewing.

“There has been a tremendous amount of growth in the Arizona craft beer scene in the past few years,” Mulala said in an email.

“Just five years ago there were less than 20 breweries in the state and today there is almost 60,” his email said. “I believe most are flourishing and experiencing solid growth.”

The beer industry has gotten large enough in Arizona to have its presence felt at the state Capitol: Gov. Doug Ducey in March signed SB 1030, dubbed the Arizona Beer Bill, that raises the production cap for craft brewers above 200,000 barrels of beer a year and lets them operate more retail shops under the same microbrewer license.

“SanTan was very involved in passing SB1030, the Arizona Beer Bill earlier this year. The central tenet to this bill was jobs, jobs, jobs,” Mulala said.

“Every drop of beer that is locally produced creates jobs in this market, and a community that can be self-sufficient and rely less on beers imported from other states and countries will be a stronger community as a whole,” Mulala said.

And Fullmer sees more opportunity for the state going forward.

“We’re going to be known as a beer state because we have similar growth rates as big states and we’ve done so despite having only one large metropolitan city and having a desert-like geography, which is special,” he said.