The Animas River runs yellow with toxin-tainted wastewater that was accidentally released from the abanoned Gold King Mine near Durango, Colorado. (Photo by Colorado Parks and Wildlife Department via Reuters) 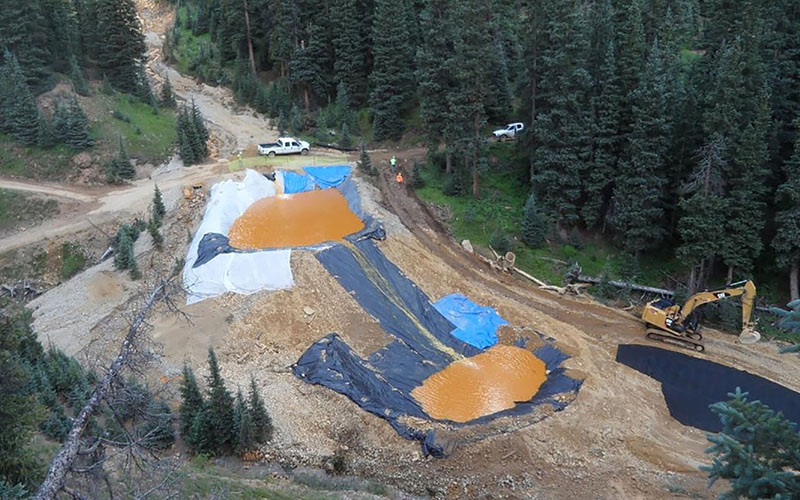 Mine waste from the Gold King Mine collects in holding pools in San Juan County, Colorado, in this Friday photo. An estimated 3 million gallons of waste have escaped. (Photo by Environment Protection Agency via Reuters)

WASHINGTON – Arizona officials continue to monitor a massive spill of toxic sludge that is heading toward the Colorado River, but most were hopeful Tuesday that it will have little impact by time it reaches the state.

An Environmental Protection Agency cleanup crew “triggered a large release of mine wastewater” last Wednesday from the abandoned Gold King Mine near Durango, Colorado, sending about 3 million gallons of wastewater so far into the Animas River.

The spill has turned the Animas, a tributary of the Colorado River, a sickly yellow as it heads downstream carrying its load of lead, iron, zinc and arsenic, among other contaminants.

“We are closely monitoring it,” said Michelle Moreno, a spokeswoman for the Arizona Department of Water Resources. “But at this time, we won’t know what the impacts are until it reaches Lake Powell and Lake Mead.”

That could be soon, according to EPA officials. They said on a conference call Tuesday that the toxic plume is an estimated 300 river miles away from Lake Powell and is continuing to flow out of the mine at a rate of 500 to 700 gallons per minute.

The EPA said it is treating water at the mine site and has given assurances to officials downstream.

“Currently, we’re hearing it will be diluted before it gets too far into Coconino,” said Trish Lees, a spokeswoman for Coconino County’s Public Health Services District.

Lees said county officials have held meetings to address the issue, but “at this point,” she said, they can’t do much more than monitor the situation and gather information from the EPA.

But EPA assurances did little to assure Rep. Matt Salmon, R-Mesa, who charged in a letter Tuesday that the agency was being “tight-lipped and reluctant to share vital information with local residents who are suffering in the wake of this spill.”

“These millions of gallons of toxic sludge … not only threaten the integrity of Arizonans’ limited drinking water resources, but also surrounding farmland and ecosystems, including the world-renowned Grand Canyon,” he wrote in a letter to EPA Administrator Gina McCarthy.

Navajo Nation officials declared a state of emergency in the San Juan River valley over the weekend and issued “do not use” warnings in response to the spill, according to the EPA, which said it is working with the tribe to deliver drinking water to affected areas.

In southern Arizona – where the Central Arizona Project draws drinking water from the Colorado River – officials said they were confident any threat from contamination would be diluted by the time it got that far.

Fernando Molina, a spokesman for Tucson Water, noted that water coming through the Central Arizona Project canal is “constantly monitored.”

While the discolored river is understandably alarming, Molina said that it’s important to remember any CAP water from the Colorado River has to travel through tens of millions of acre-feet of lake and river waterways before it ends up in Tucson.

Even if “there is a contaminant detected in the CAP,” he added, “we always have the ability to simply not take the water.”

That’s not an option at the Grand Canyon, but businesses that rely on the park for tourist dollars said they have not seen any fallout, despite widely broadcast images of the spill.

“It’s not something that we have been too worried about,” said Joanne Hudson, a spokeswoman for the Flagstaff Convention and Visitors Bureau. But she said they, too, are keeping an eye on the situation.

But environmental advocates across the state called the spill a wakeup call, even if it didn’t start in Arizona.

“It highlights the need to address the pollution from mines,” said Sandy Bahr, director of the Sierra Club’s Grand Canyon Chapter.

Arizona needs to “ensure that these mines clean up after themselves,” Bahr said in an email.

“It is a reminder of the importance of clean water in our rivers and streams,” she said. “We all live downstream, and we all benefit from having strong protections.”