A firefighter walks past a line of fire that was set in a 2008 controlled burn in the Coconino National Forest. Advocates say burns like this head off bigger fires later. (Photo by Ian Horvath/U.S. Forest Service) 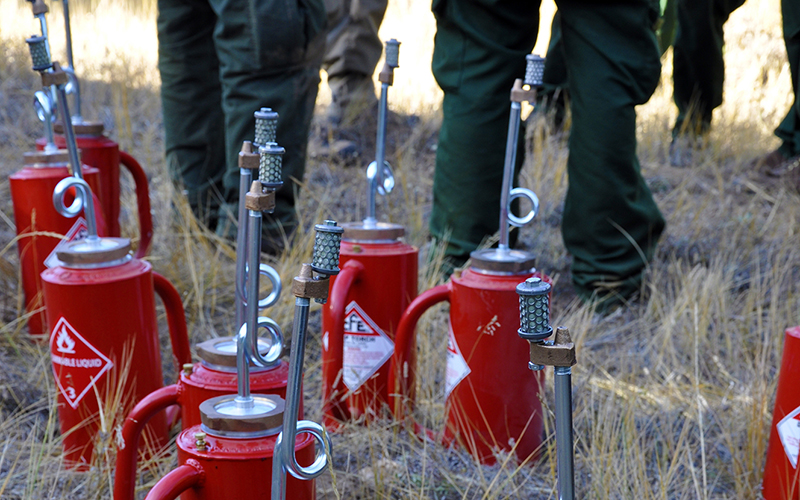 Firefighters use drip-torch cans like these, in this 2009 file photo from Coconino National Forest, to pour out fuel and light a controlled line of fire for a prescribed burn. (Photo by Brady Smith/U.S. Forest Service) 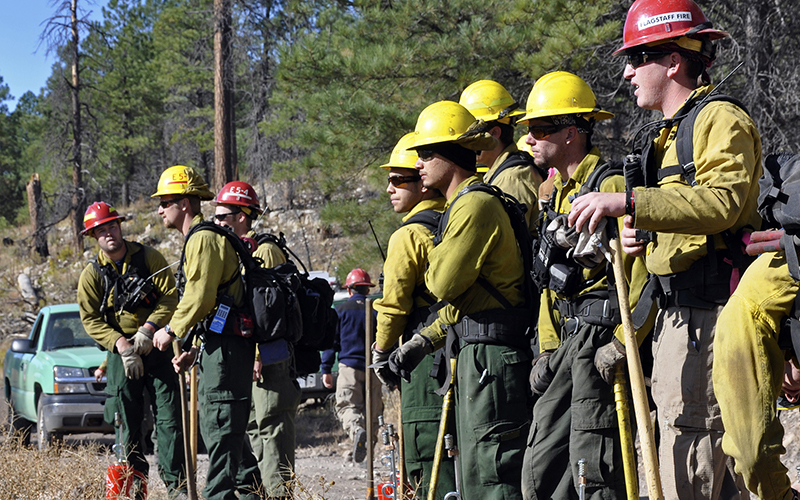 Firefighters from the Mormon Lake Ranger District line up with their gear in preparation for a prescribed burn in the Coconino National Forest in this October 2009 file photo. (Photo by Brady Smith/U.S. Forest Service)

WASHINGTON – As bureaucrats in Washington were complaining about growing costs of wildfires Wednesday, forest officials in Arizona were lighting a forest fire – but the two groups are working toward the same goal.

The “prescribed burn” that was set in the Apache-Sitgreaves National Forest was put out Wednesday evening after burning 73 acres of scrub that could otherwise have served as fuel for a future wildfire.

“The fire acts as a janitor in the forest,” said Brady Smith, a spokesman at the Coconino National Forest.

Prescribed burns are just one in a “a whole suite of restoration activities” that aim to reintroduce natural cycles to forests and head off future catastrophic wildfires, said Dick Fleishman, assistant team leader for the Four Forest Restoration Initiative.

There can be risks to prescribed burns – after some burns spread onto private property in other states, it led to a Senate bill calling for more review by state and local government officials before prescribed burns are set.

“Foresters had no business starting those fires,” Thune said at a hearing on his bill last month, adding that a more thorough approval process could prevent such mishaps.

But some lawmakers at the hearing worried that the bill might hamper what one called “the Forest Service’s ability to conduct important wildfire mitigation work.”

And officials on the ground in Arizona said Wednesday that there are already plenty of safeguards built into the approval process for prescribed burns in the state.

Before a specific burn plan is even drawn up, officials conduct pre-surveys to make sure wildlife and rare plants are not affected. Fleishman said “it takes a lot of prep work” before any restoration actions can be taken.

Specialists from archaeologists to fire managers look over the plan, Smith said, and “prescribe what the forest needs.” Then the air quality division of the Arizona Department of Environmental Quality has to weigh in.

Air quality division Director Eric Massey said land management agencies have to submit a prescribed burn plan at least two weeks before the desired burn date. That plan must include basic information on the duration and location of the burn, as well as details on the types of fuel in the area and possible emission reduction techniques.

The Forest Service also has to call ADEQ “about one business day before the fire is set,” Massey said, so his agency can study predicted wind patterns on the burn dates and potential smoke impact.

Massey called prescribed burns critical for Arizona forests “so if a lightning strike hits, it’s not a case of horrible destruction.”

He said Wednesday that he is not familiar with Thune’s bill, “but I can tell you that from environmental quality, we are looking very carefully at smoke management.”

While the process may seem counterintuitive, advocates of prescribed burns said they literally fight fire with fire, by burning up woodland fuels in a controlled manner instead of waiting for wildfire to come and then burn out of control.

And Fleishman said that “ironically, the more we burn, the less smoke” is released.

A first prescribed burn consumes large forest debris like logs so that on subsequent passes, he said, prescribe burns or wildfires burn “finer fuels and grass,” resulting in fewer emissions and less likelihood of disastrous fires.