The Clean Power Plan released by the Environmental Protection Agency aims to cut carbon emissions nationwide. In Arizona, where Four Corners Power Plant is located, the goal is to cut carbon from 1,552 pounds per megawatt hour in 2012 to 1,031 pounds by 2030. (Photo by Tony Bennett/APS) 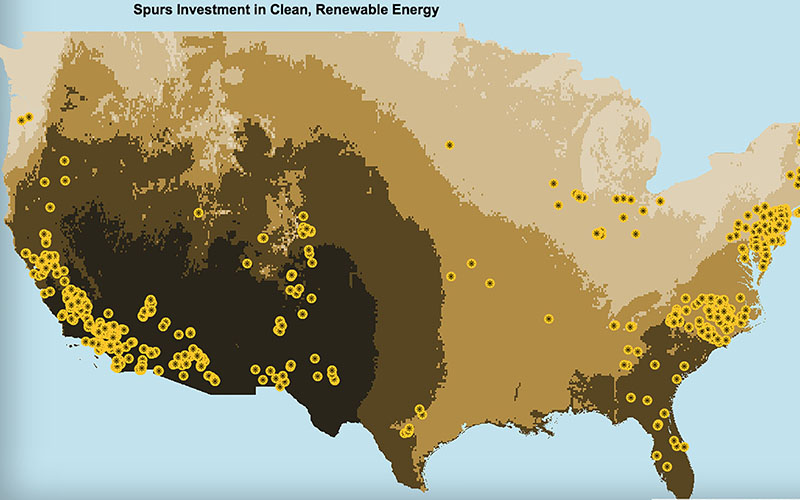 WASHINGTON – Arizona environmental groups cheered the final version of the Clean Power Plan unveiled Monday by the Environmental Protection Agency, a first-ever national standard that aims to cut power plant carbon emissions by a third by 2030.

“Today marks the end of an era for dirty power plants that have spewed dangerous pollution into our air without limits for too long,” Sandy Bahr, director of the Grand Canyon chapter of the Sierra Club, said in a prepared statement.

But Arizona utility companies and state environmental officials both were more cautious Monday, saying they need time to study the plan that has been more than a year in the making.

“We really need some more time to study the rule and then we’ll have more opportunity to see how this will impact us in Arizona,” said Patrick Ledger, CEO of Arizona Electric Power Cooperative.

The plan was officially announced Monday by President Barack Obama, who said action needs to be taken now to protect future generations from climate change caused by greenhouse gases.

Under the plan, each state will have a target for reducing carbon dioxide emissions from their power plants by 2030. States’ final emission goals will range from 771 pounds of carbon emissions per megawatt-hour generated to 1,305 pounds per megawatt-hour.

“We’re setting fair, consistent standards across the country. And we’re giving states and utilities the time and the flexibility they need to adopt strategies that work for them,” EPA Administrator Gina McCarthy said in a conference call discussing the plan.

McCarthy stressed the flexibility the plan offered states to achieve their carbon reductions as they see fit, customizing the plan to their own needs and requirements.

“States and utilities told us they needed more time than the proposal gave them, and we listened,” McCarthy said. “That’s why in the final rule … the required pollution reductions don’t kick in until 2022. That’s a two-year extension (from the original plan).”

Earlier versions of the plan would have required that Arizona achieve some of the steepest carbon-emission reductions in the nation.

Under the final version, Arizona’s 2030 goal is 1,031 pounds of carbon emissions per megawatt-hour, down from 1,552 pounds per megawatt-hour in the benchmark year of 2012. That puts Arizona about in the middle of the range for states in the final Clean Power Plan.

If implemented, the plan would cut carbon emissions from the power sector by 32 percent below 2005 levels by 2030.

“It seems like the new plan has become a little more lenient but nothing has been confirmed yet and I know the other utilities are in the same boat as us right now,” Ledger said. “It’s all up in the air.”

But others said Arizona has an opportunity to lead the nation by developing alternative energy sources to meet the plan.

“With the Clean Power Plan now final, the question is not whether to reduce carbon emissions from the electric power sector in Arizona but how,” said Amanda Ormond, Arizona representative for Interwest and Advanced Energy Economy, in a statement from the clean-energy trade association.

Renewable energies like solar, wind and geothermal will be at the heart of Arizona’s attempts to reduce its carbon footprint and comply with the new national strategy, advocates said.

“Arizona is in a great position to meet these final federal targets with solar energy projects already being planned,” John Shepard, senior director of programs at the Sonoran Institute, said in a prepared statement. “Accelerating solar and other renewable energy ultimately will give consumers more stable rates, contribute to a healthier environment and strengthen Arizona’s economy.”

In addition to the climate benefits, supporters pointed to the health benefits of cleaner air.

“The Clean Power Plan isn’t just a program to help stabilize the climate and modernize our energy sources, it is also a valuable investment in Americans’ health and well-being.” Barbara H. Warren, director of the Arizona chapter of Physicians for Social Responsibility, said in a prepared statement.

While officials wanted time to study the plan, advocates said now is the time to act.

“Our public officials should stand with countless Arizonans throughout our state by siding with more clean-energy jobs and cleaner air and water by supporting the Clean Power Plan,” Bahr said.