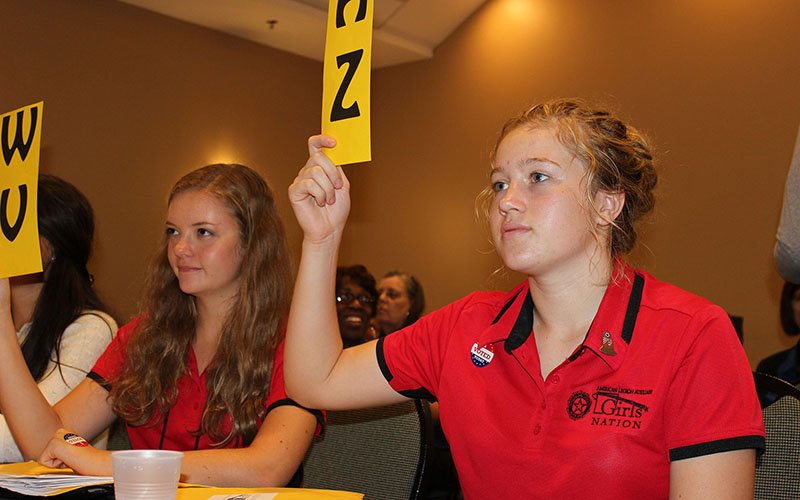 Lora Delahunt, 17, a senior at Apollo High School in Glendale, said Girls Nation has helped her see the different ways she and other ‘senators’ can serve the country. (Photo by Stacy Poca/American Legion Auxiliary) 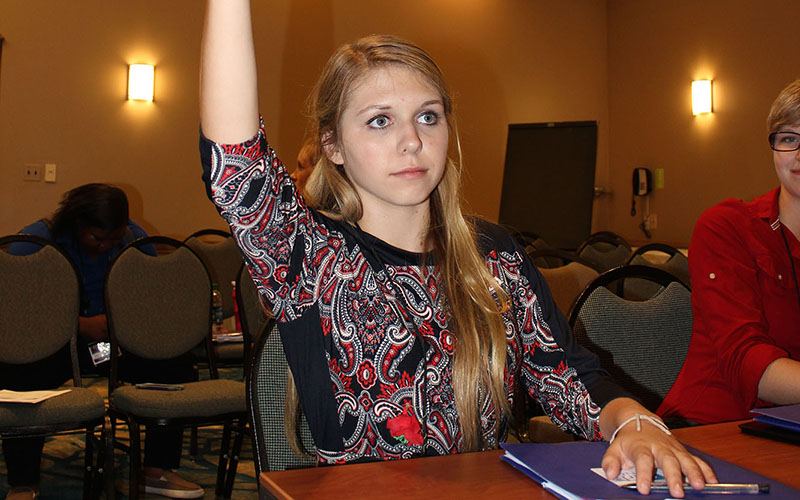 Kennedy Prock, 17, a senior this fall at Mountain View High School in Mesa, casts a vote as one of the two ‘senators’ from Arizona in Washington for Girls Nation. (Photo by Stacy Poca/American Legion Auxiliary)

WASHINGTON – Over the course of three days this week, Arizona teens Kennedy Prock and Lora Delahunt helped draft a platform for their party and debate bills they had written themselves for the Girls Nation Senate that was meeting here.

Compromise was essential to that process of legislating, leading Prock to offer a message to the grown-up lawmakers in this city of partisanship and divisive politics.

“Compromise is not a bad word,” said Prock, 17, a senior this fall at Mountain View High School in Mesa.

Like other senators at Girls Nation, Arizona teen Kennedy Prock had a button honoring her grandfather, a veteran. (Photo by Nihal Krishan)

She and Delahunt, also 17, and a senior at Apollo High School in Glendale, were among 100 “senators” in Washington for a whirlwind week of activities for the Girls Nation, a mock legislature sponsored for 69 years now by the American Legion Auxiliary.

The conference brings together two girls from every state, who are elected or chosen in Girls State sessions around the country and sent to Washington to learn about the government, civic duty and how to become the leaders of tomorrow.

The American Legion runs a similar program for boys, Boys Nation, that was in Washington last week.

“The objective of Girls Nation is teaching them about the U.S. government, why they should take pride in the country they live in,” said Stacy Poca, a spokeswoman for the American Legion Auxiliary.

“A lot of the girls develop an interest in the government and they’re blown away by what they learn in D.C. and find it to be a lot of fun,” Poca said. “Oftentimes they change their career paths into something related to government or politics. We may have the future president amongst our group of girls, you just never know.”

Delahunt and Prock were elected from more than 300 girls at Arizona Girls State held in Tucson in June. They got nominated, went through “a primary and then got elected as senators – just like in real life,” said Penny Maklary, director of Arizona Girls State.

Lora Delahunt, an Arizona teen representing the state as part of Girls Nation, with her grandfather, a veteran. (Photo by Nihal Krishan)

Besides holding their own legislative sessions in Washington, the Girls Nation senators get to see the government in action. Prock and Delahunt met their real-life counterparts, Arizona Republican Sens. John McCain and Jeff Flake, attending a Senate Armed Services Committee with McCain on Wednesday.

They also went to the White House, where all the Girls Nation senators got to meet with President Barack Obama on Thursday.

The program aims to help the girls discover ways they can serve the country going forward, empower them to be better citizens, get them more involved in government and help them give back to their communities.

The two Arizona teens, wearing their official red Girls Nation uniforms, appeared completely at ease as they waited Wednesday for a meeting with Flake.

Prock, who hopes to return to D.C. as a political reporter one day, dropped the word “awesome” frequently as she described who excited she was by Washington’s beauty, history and political culture and the overall experience with Girls Nation.

Delahunt, who hopes to be a doctor, was slightly more reserved, but appeared just as enthusiastic about what she has learned from the program.

Prock is an Arizona Girls State legacy: Her mother, Kimberly, attended Arizona Girls State when she was in high school in 1991. But she and Delahunt both said they had to pinch themselves several times during the week to make sure the experience was real.

“You can serve your country in so many ways,” said Delahunt. “That selfless attitude, asking, ‘Wat can I do to help others?’ is really important.

“In some ways I got to learn this from getting to see how the real Senate works and functions with Sen. McCain. That’s an experience I won’t ever forget,” she said.