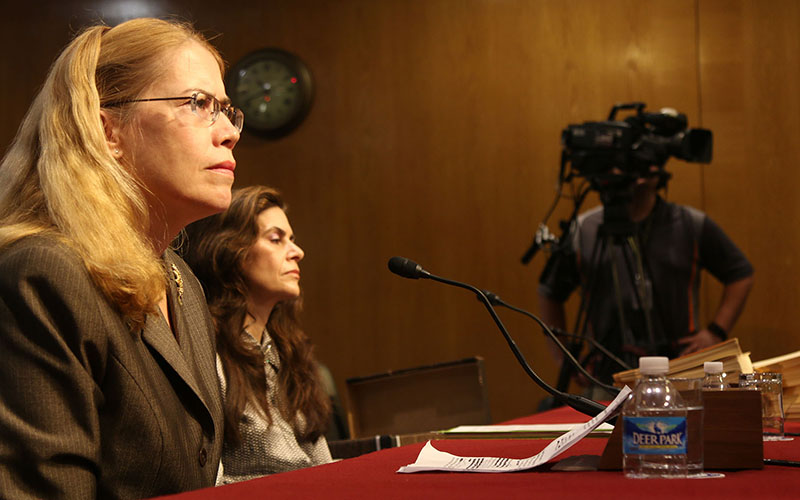 Dr. Katherine Mitchell, right, and Dr. Lisa Nee, who blew the whistle on Veterans Affairs facilities in Phoenix and Illinois, testify to a Senate committee on veterans care issues. (Photo by Jamie Cochran) 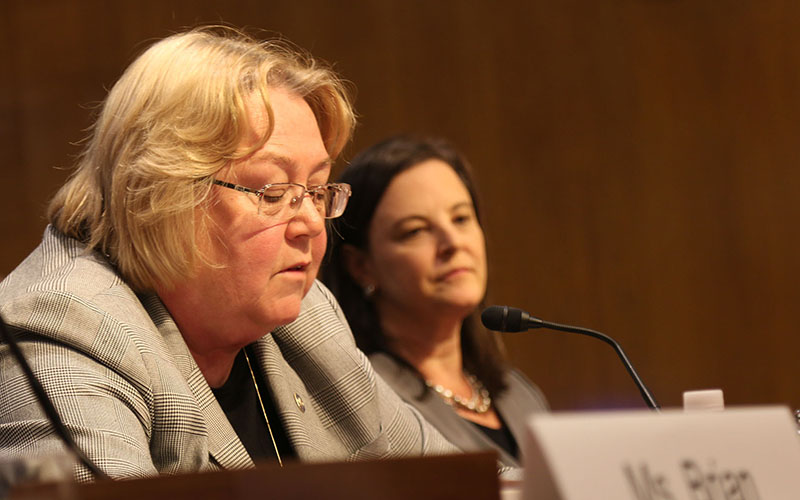 Department of Veterans Affairs Deputy Inspector General Linda Halliday tesfifies that her office values and tries to protect and whistleblowers and wants to hear their complaints. (Photo by Jamie Cochran)

Dr. Katherine Mitchell, a whistleblower who helped uncover problems at the Phoenix Veterans Affairs hospital last year, said some things have improved but more needs to be done. (Photo by Jamie Cochran)

WASHINGTON – A doctor who blew the whistle on problems at the Veteran Affairs hospital in Phoenix testified Thursday that some things have improved since last year’s revelations, but there is still work to be done.

“Obviously, the culture of whistleblower retaliation is still alive and well,” she said.

Mitchell was part of a panel of VA whistleblowers who called on the Senate to strengthen rules against reprisal and confidentiality protections for people like them.

“The system is totally backwards,” said Sen. Susan Collins, R-Maine, who called it “disgusting and appalling” that the whistleblowers who came forward were the ones who paid the price.

Nee criticized the department’s Office of Inspector General, which she said had a pattern of first denying anonymity to whistleblowers and then “personally disparaging the reputation (of those people) and finally colluding with the agency to engage in various methods of calculated retaliation.”

But VA Deputy Inspector General Linda Halliday, who was just appointed to the job this summer, told the committee she has “taken several actions to further strengthen the OIG’s Whistleblower Protection Ombudsman program,” according to her prepared testimony.

Danielle Brian, executive director for Project on Government Oversight, said there also need to be penalties for those in the department who retaliate against whistleblowers.

“Whistleblowers within the VA should be able to hold the retaliators accountable, something that’s nearly impossible unless Congress lowers the burden of proof necessary to discipline retaliators,” Brian said.

Mitchell said she was warned by co-workers that she would lose her job if she spoke out. But she was just as worried that “my fellow co-workers would be so intimidated by the VA that they would not be willing to speak out.”

Mitchell was one of the first to come forward in what would become a national scandal over VA care that forced the resignation of then-Secretary Eric Shinseki. She said in her written testimony that her original complaint mentioned “disturbing system issues involving suicide, statistical manipulation of the wait list, failure to prioritize appointments” at the Phoenix VA and more.

Nee said she was compelled to come forward after encountering “overt disinterest in quality patient care, deliberately organized retribution towards exceptional employees, and blatant disregard for universal guidelines” at Hines.

Shock turned to horror, she said, as she “realized many of the veterans already died from or suffered cardiac complications.”

Since the scandal surfaced in Phoenix last year, Mitchell testified that the hospital has fixed its scheduling and staffing problems.

“The scheduling is now done appropriately … and the staffing in the ER has changed so they actually have many more physicians and many more nurses,” she said after the hearing.

But she and the others at the hearing said there is a long way to go before all issues are resolved.

“There’s been no nursing triage training for the emergency department implemented,” Mitchell said. “So that they’re still at risk for patients that come into the ER, that they won’t get the appropriate triage needed to get them to the next appropriate level care.”

Mitchell said her experience after filing her complaints about care led her to believe that there “is truly administration evil within the VA.” But that doesn’t mean she is giving up on the agency, vowing to continue working at the VA to make sure needed change happens.

“I stay within the VA because the VA mission is important to me. I’m willing to stay to make a change,” Mitchell said.