Officials with Arizona’s state-run pension systems say the funds are in good shape going forward, despite a drop from 2003-2013 compared to other states. (Photo by 401kcalculator.org via flickr/Creative Commons) 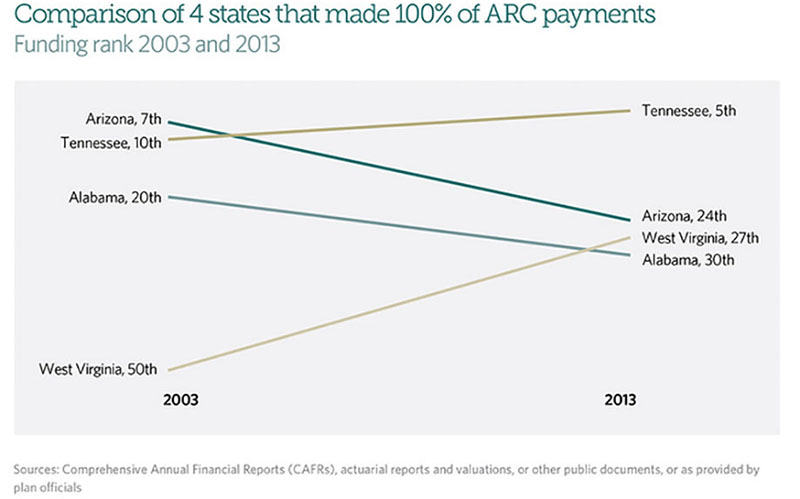 Despite making 100 percent of actuarially required contributions, Arizona slid from the seventh-best-funded state pensions in 2003 to ranking 24th in 2013. (Chart courtesy the Pew Charitable Trusts) 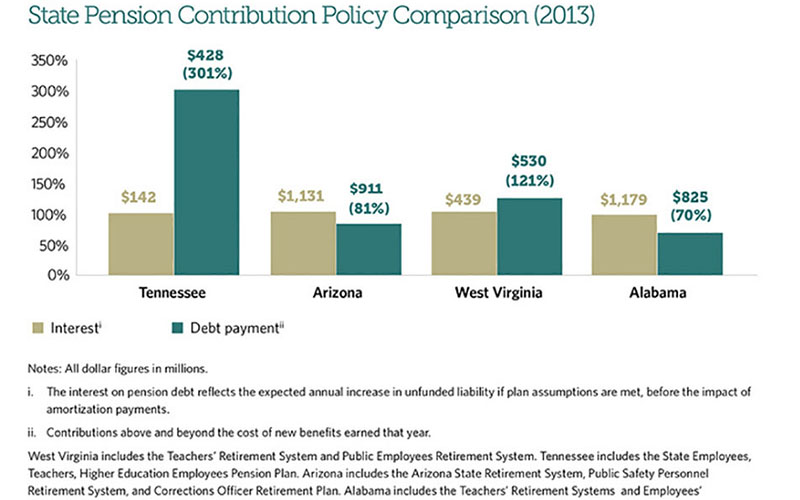 Interest on pension debt in Arizona grew faster than payments on that debt. The state paid about 81 percent of the debt in 2013. States that rose in the ranking paid down debt.(Chart courtesy the Pew Charitable Trusts)

WASHINGTON – Funding for Arizona’s state-run pension funds fell by more than 20 percent from 2003 to 2013, but the almost 600,000 state workers covered have no reason to worry about their retirement, officials said.

Arizona’s funding decline was outlined in a Pew Charitable Trusts report last week that detailed a nearly $968 billion shortfall in state-run pension systems across the country as of 2013.

A previous version of this story incorrectly reported the size of the unfunded liability for Arizona’s state-run pensions. That number was $15.1 billion in 2013, according to a report by the Pew Charitable Trusts. The story has been revised to reflect the correct information. Clients who used this story are asked to run the correction that can be found here.

Over the decade studied, Pew said Arizona pension systems fell from seventh-best-funded in the nation to 24th, a shift the report blamed on “minimum funding standards that allowed debts to grow over time.”

But the findings are nothing to be worried about, according to numerous officials connected with the systems.

The Arizona State Retirement System, covering more than 545,000 people, accounts for most other public employees – education, county, state and municipal workers – along with charter schools that may apply for coverage.

The report gives the financial history for every state’s retirement system, but singles out four – Arizona, Alabama, Tennessee and West Virginia – because they posted significant changes during the decade-long reporting period.

But Pew’s numbers may have overstated the shift for Arizona, said Paul Matson, the director of the Arizona State Retirement System. Pew’s reports used what he called “smoothed” numbers, which he said are not the best numbers for this type of data analysis.

While Pew’s numbers showed Arizona’s funding gap growing from 2003 to 2013, the “unsmoothed” numbers – which Matson believes to be a better “reflection of financial health” – show little change.

Hoffman – who is on Matson’s board of directors, but was careful to say he was speaking in his capacity as a professor – said that it is a “problem to some degree that you’re not today at 100 percent.” But he also believes people should be focusing on and thinking about “what the plan is to do over the next 10 to 15 years.”

The report acknowledges that it is not forward-looking. By stopping in 2013, it does not include 2014 investment returns that “point to a reduction in unfunded liabilities for the majority of states” and includes “losses from the 2008 Great Recession.”

Christian Palmer, spokesman for the Public Safety Personnel Retirement System, pointed to some of the reasons for the declines cited by the report.

The burst of the tech bubble in the early 2000s had a negative impact on the investments many pension systems use to generate revenue, Palmer said. Those investments also took a hit during the recession in the latter part of that decade.

Palmer also noted that the public safety system is required to pay out half of any annual return that exceeds 9 percent to retirees. That increase remains for the life of that retirees’ pension – even in later, under-performing years.

Palmer said that requirement cuts into the system’s ability to properly fund assets and pay off interest, a problem that he said is “likely going to have to be addressed if the funding level is ever to be correct.”

But there is “reason to remain optimistic,” Palmer said, because there is now “widespread recognition among policymakers, public safety employees and employers of the need for structural changes” to the retirement systems.