San Carlos Apache tribe members listen to the “war song” that began their protest at the Capitol over the proposal to allow mining at Oak Flat. (Photo by Jamie Cochran) 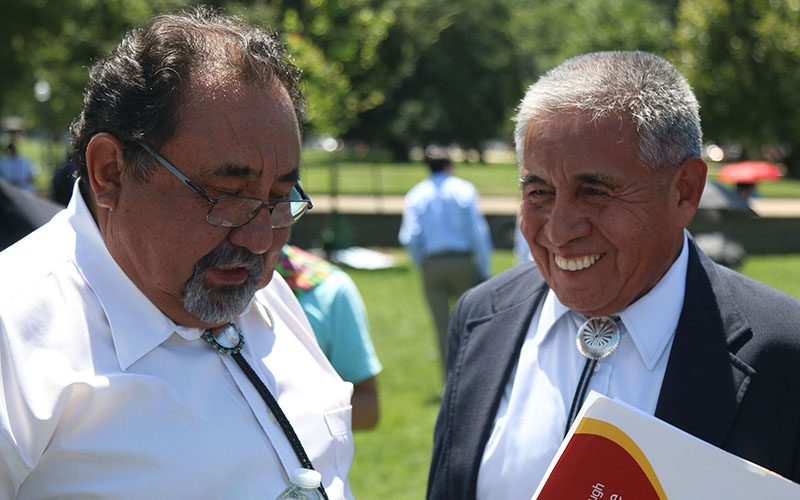 Rep. Raul Grijalva, D-Tucson, left, with Tohono O’odham Chairman Edward D. Manuel at rally against a proposal for mining at Oak Flat, sacred to the Apache. (Photo by Jamie Cochran) 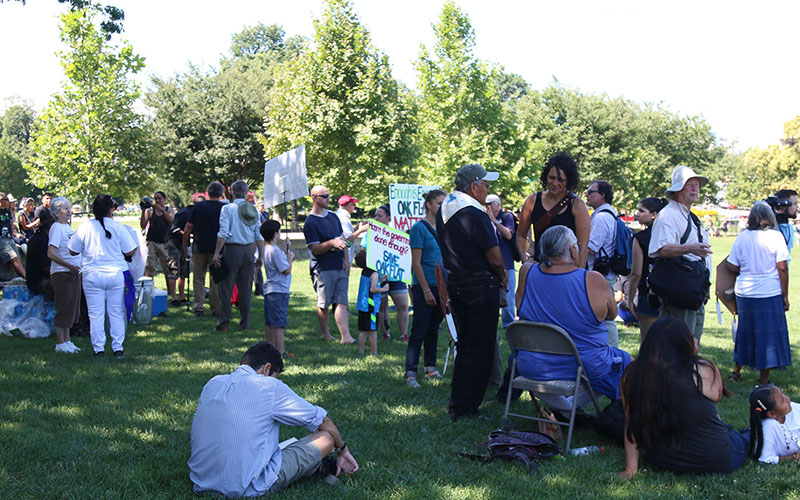 Protesters wait in the shade outside the Capitol before the start of a rally against a plan to swap land at Oak Flat with a copper mining company. (Photo by Jamie Cochran) 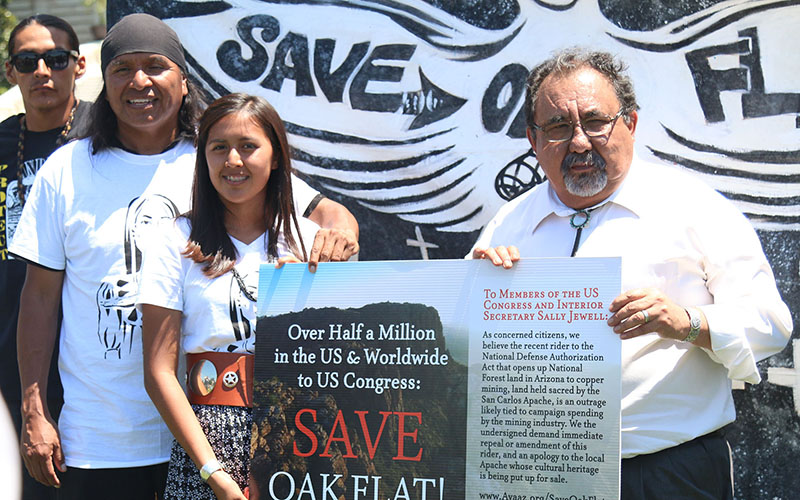 Wendsler Nosie, left, and Naelyn Pike with Rep. Raul Grijalva, sponsor of a bill to reverse the deal to allow mining operations at Oak Flat. (Photo by Jamie Cochran) 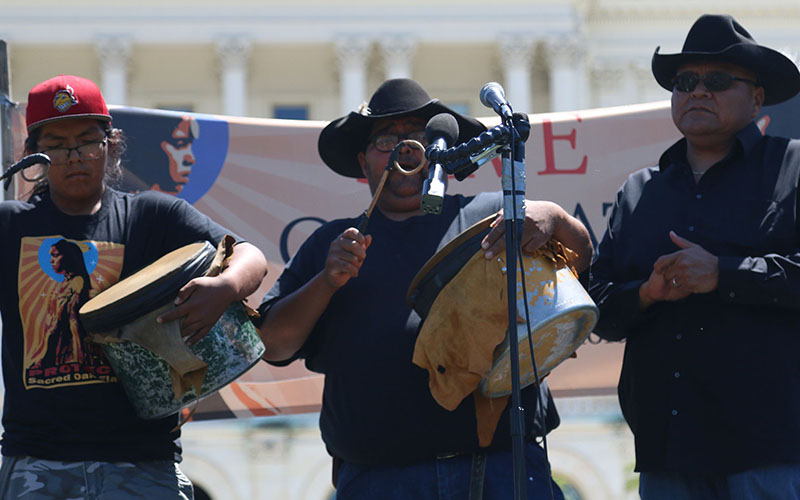 The protest against the Oak Flat land swap began with San Carlos Apache drummers playing the “war song” to the crowd outside the Capitol. (Photo by Jamie Cochran) 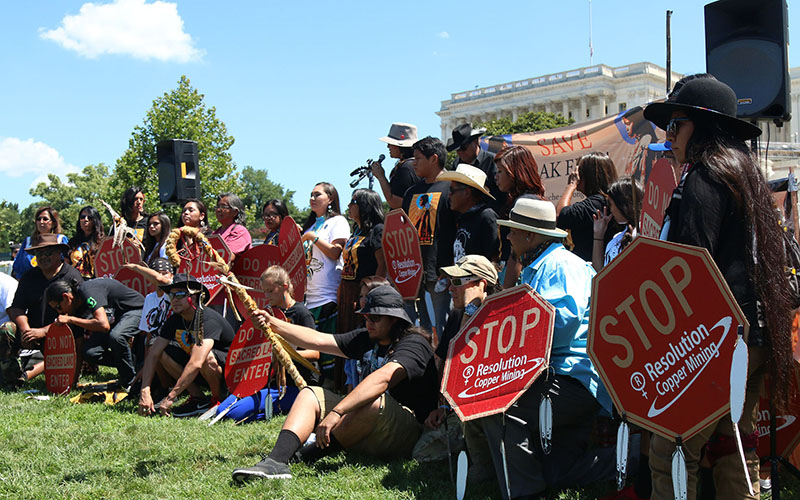 The crowd listens to speakers at a Capitol rally against a plan to swap Oak Flat, considered sacred by the San Carlos Apache, with a mining company. (Photo by Jamie Cochran)

WASHINGTON – The protest to preserve Oak Flat turned heated Wednesday as San Carlos Apache tribal members, rallying at the Capitol, vowed to do whatever it takes to reverse a deal to turn Oak Flat over to a mining company.

“I’ll die for my land,” said Standing Fox, a San Carlos Apache who was at the Capitol. If lobbying and legislation don’t work, he said, then in a “worst-case scenario, we will be out there blockading. We’ll be stopping the whole process physically.”

A photo caption with a previous version of this story incorrectly identified a tribal official talking with Rep. Raul Grijalva, D-Tucson. That official is Tohono O’odham Chairman Edward D. Manuel. Additionally, the story incorrectly said Rio Tinto did not respond to a request for comment. In fact, Cronkite News was not able to contact the company Wednesday. The story and caption here have been revised to reflect the correct information. Clients who used this story are asked to run the correction that can be found here.

It was the second day of protests in Washington for the Apache, who were joined Wednesday by members of other tribes as well as some non-Indians, all of whom pledged to help take back what they call sacred land.

But supporters of the mining project fired back Wednesday, charging that the land in question is not sacred and accusing opponents of mounting a “misinformation campaign” driven by “environmental extremist groups.”

“Anti-mining opponents have sunk to a new low by using members of the Apache tribe to further their misguided effort, in total disregard to the high levels of poverty and unemployment on the reservation,” said Rep. Paul Gosar, R-Prescott, in a statement his office released in response to the rally.

Sen. John McCain, R-Arizona, defended the mining project, saying in a prepared statement that Oak Flat Campground was established by a “1955 Interior Department Public Land Order for recreational purposes, not on any religious or cultural grounds.”

At issue is the swap of thousands of copper-rich federally owned acres in southeast Arizona in exchange for thousands more acres of what the deal’s supporters say is environmentally sensitive land owned by Resolution Copper.

Oak Flat is included in the land the mining company would get.

Supporters say the mining project near Superior would bring thousands of jobs to the region and generate about $1 billion a year in economic activity over an estimated 60 years.

Efforts to pass a bill authorizing the swap failed in several sessions of Congress. The plan finally passed in December, when McCain tacked the proposal on as an amendment to the National Defense Authorization Act, which passed the House and Senate.

“The truth is, this land exchange legislation was a bipartisan compromise arrived at after a decade of debate and public testimony in Congress,” McCain’s statement said. “It does not involve any tribal land or federally designated ‘sacred sites.'”

The claim that it was an open process was challenged Wednesday by Rep. Ruben Gallego, D-Phoenix.

“The problem with the Resolution Copper deal was that it was put through a process that was not open and transparent,” Gallego said. “It was tucked into the NDAA and I think it basically disempowered the public to know what’s going on with their federal lands.”

Gallego is a co-sponsor of a bill by Rep. Raul Grijalva, D-Tucson, that would repeal section 3003 of the National Defense Authorization Act, the section that allows the land swap.

Grijalva was cheered Wednesday when he told the rally that because people like the San Carlos Apache are standing up for their beliefs, “We are going to win this fight.”

Others took the stage at the rally vowing to do whatever it takes to get their land back. One woman even said her great-grandmother is buried at Oak Flat and no member of Congress scares her.

“We come here with a message, and the intent to make history,” said Harding Burdette, a San Carlos Apache member leading the rally.

Rio Tinto, the company that owns part of Resolution Copper, said in a statement released Tuesday that the company was “committed to involving and seeking input from local tribes,” and that it would continue to reach out to tribal opponents.

Gallego said that with a Republican-controlled Congress, it will be tough to pass Grijalva’s bill, but he said opponents have to try.

“It’s important for us to lay down a marker because this is going to be a fight that may take a couple years,” Gallego said.

Standing Fox, among many others, said he has no doubt that their fight will be successful.

“We do have faith that we are going to stop the mining process on our sacred land,” he said.